You are at:Home»News & Current Affairs»Opinion»Opinions, realities and the doppelgänger by the Rev. Lesley Carroll
Social share:

Much opinion has been offered to explain what is going on with regard to the flags protests. Loyalist communities experiencing identity crises, disenfranchisement, social justice issues including education and access to power, under representation and lack of political voice have all been offered as explanations for what is going on.

Ironically the ‘class divide’ that has become evident over these last weeks has not been bridged by the protests but is more likely to have been emphasized given that ordinary unionists don’t want to be associated with protest and challenge to democracy any more than they have wanted to be associated with trouble at parades over the years. 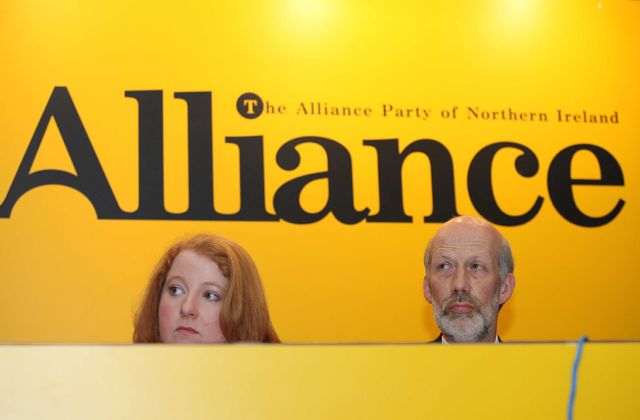 Already doubt has been expressed as to the efficacy of the proposed unionist forum and if it doesn’t include thinking loyalists who can represent voices that too often are marginalized then it is unlikely to resolve matters to the benefit of those who feel most deeply the loss of the symbol from the City Hall.

Of course it is retorted that this is not a Loyalist or even a Unionist problem. There is strong feeling that this was all caused by Republicans who were intent on their equality agenda no matter what the implications for relationships and future-building.

Opinions should not deafen the realities in which we are living or to the shadow of our doppelgängers, those ghostly selves that throw their shadow across our paths from a past from which we have not yet managed to divorce ourselves or to bring to a conclusion.

Those sinister shadows powerfully threaten stability and bring to mind the old feelings and emotions, the times when we were more certainly enemies and the realities of a place of familiarity in which we might feel more comfortable.

The past is not yet past and gone but a simplistic approach or an uncomplicated remembering only invites us back. Things are not black and white and when we cast each other in black and white we miss the journey we have made and we miss, perhaps more importantly, the place to which we had hoped we would go.

A shared future in which society cohered around new vision and principles and experienced an as yet undefined integration remains as a goal which is in our gift. Some how we have reached a place where a number of people across the unionist community believe that what is intended is obliteration and still others are suspicious that they will be consumed by the political vision of Republicans.

So perhaps it is time to make the struggle to allow opinion and reality to talk to each other in order that the shadow of the doppelgänger doesn’t overshadow a potentially better future. Analysis is needed, as well as honesty.

Courage will be required to halt narrow political agendas all round and open up hearts and minds to the new politics of working with others and sharing the space.

How might we begin in a way which allows us to acknowledge that we are sharing and not running on separate tracks?

Republicans are often blamed for the pursuit of the State when it comes to the crimes and misdemeanours of the past. They are accused of asking others to hold their hands up without any willingness to hold up their own hands.

Yet it might be said that by this pursuit of the State they are in fact setting the State above other actors in the conflict. Making ‘their army’ sit outside the investigative process suggests that they were not in any way equivalent to the State but quite outside it.

Unionists have been sharing power but still acting like it was a concession. Every time they dig their heals in and require those on ‘the other side’ to vigorously pursue their equality agenda, they suggest that the old fault lines haven’t gone away and that ‘big house’ unionism is alive and well.

Yet Republicans modified their position on the flying of the flag at Belfast City Hall and voted to fly the British flag, including on the Queen’s birthday.

Unionists hold to the investigative processes that we have, the justice system, as a means to bring those who deserve it to justice. Yet they fail to find a way or push for a way for that system to bring many to justice, or at least a form of justice, in the same way that the State actors are brought to justice.

They do not want to consider an alternative way of dealing with the past yet they complain that what we have allows republicans and their supporters to pursue the State.

There is a resistance to changing language and to thinking outside of the box. Yet the doppelgänger thinking allows the past to persist and suck us back into dangerous times when differences and fault lines are more clearly visible than they have been for a very long time.

Undoubtedly they have always been there. It would be foolish to believe otherwise. This is not a time for blame. It is a time for stretching sinew and imagination to will and to make a way out of the past and into a different and shared future.

Rev. Dr. Lesley Carroll has been minister of the Fortwilliam and Macrory Presbyterian Church since 1998. She was minister at Macrory Memorial from 1992-1997 and at Fortwilliam Park in 1998. In 2005 the two congregations amalgamated to become Fortwilliam & Macrory. Lesley is passionate about promoting cross community development in northern Ireland. One of Lesley’s passions is to spread the Good News about Jesus whilst enjoying a cup of tea and a biscuit. Lesley lives in the church manse along with her two dogs Ruby and Mabel.