It had the feel of farce – one street play in many such scenes that a senior loyalist is calling the creation of ‘Faceless Book’.

As the City Hall flag row continues to spill out and over the streets, he admits himself he doesn’t know who is organising the protests, and yet he is part of them; a puppet to use his own description.

On Monday evening, he was some miles away from where I stood on a busy junction, a stone’s throw from the Europa Hotel where the road was blocked. 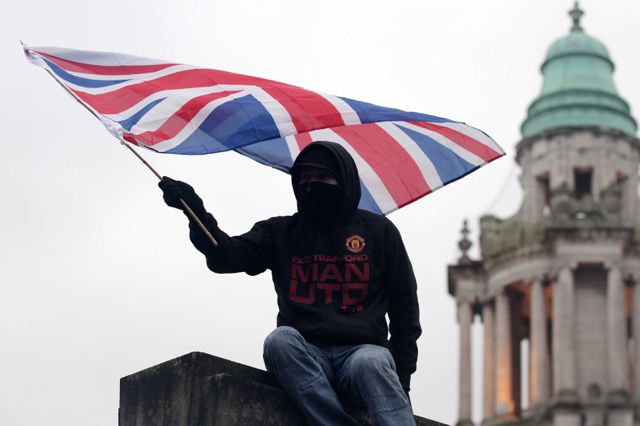 Loyalist protest at the City Hall in Belfast

The traffic travelling down towards the city centre from Shaftesbury Square was stopped in its tracks.

Buses were parked; an ambulance had to make a detour down a side street and car drivers doubled back trying to find a way out of this particular protest jam.

It was a dramatic entrance to this street play, but then there was a pause, when nothing seemed to happen.

A young girl stood with her back to the line of police riot shields and argued with local men trying to persuade her to leave the road after more than an hour of protest.

In the end, she stormed off, swearing and throwing her flag to the ground.

Then the police moved the protesters back; back off the road and towards Sandy Row.

What I watched had neither rhyme nor reason, other than blocking the road.

It was confused, confrontational; lacking any sense of control.

What’s happening on the streets is not going to run the flag back up the City Hall pole, but who in political or community leadership is going to tell the protesters that?

The tail is wagging the dog.

Even the loyalist, who puts these protests down to the anonymity of organisation on ‘faceless book’, stood blocking a road on Monday night. 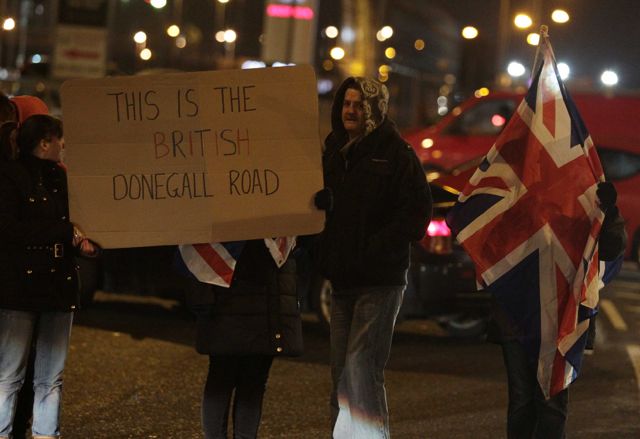 When I got home, I sent a number of tweets to the PUP leader Billy Hutchinson.

In Monday’s Daily Mirror he described what is happening as a “small ‘r’ revolution, which has seen people, unscripted, gathering in numbers to reclaim their political voice”.

He wrote about this being “a salvo to a system which they feel increasingly detached from”, and added:

“As a leader of a unionist party which owes its lineage and existence to grassroots sentiment, we understand the frustration – indeed, we feel it.”

The messages I sent to him on twitter were as follows:

Not long afterwards came news of arrests elsewhere, including kids aged 11, 12 and 13.

Who and what has introduced them to this street madness that lacks leadership, strategy and a realistic goal?

All of this needs a cross-party and cross-community conversation and sooner rather than later.

It needs to happen before someone is seriously injured or killed

The City Hall decision came as a result of a vote. That’s the way and reality of politics.

There are, however, questions for republicans.

Why the need to post a film of the flag coming down?

Why the need to play that political game of winners and losers?

It brought this observation from the loyalist Jackie McDonald.

“Why would anybody do that if it wasn’t to infuriate the loyalist community?” he asked.

“This is rubbing the PUL community’s nose in it,” he said.

So, republicans need to think seriously about this, and, somehow, a conversation needs to happen; not inside the narrow frame of one community, but across the communities and on a range of difficult issues that have been ignored or parked.

This place needs to learn how to live with itself, and a high politics and peace needs to find its way to the ground.

There are issues on which this divided community are still at war and another generation is being polluted and poisoned in the play.

Social share:
Billy Hutchinson City Hall flags Jackie McDonald protests PUP
Previous ArticleAm I alone in making sense of the Census?
Next Article The new ‘Us and Them’ in Unionism