You are at:Home»News & Current Affairs»Opinion»Confidence requires more than a flag
Social share:

“It’s a slow process, but politics here is changing and the small steps taken today can soon become the new norm. The electorate is turning its focus increasingly on the search for solutions to their everyday problems and the DUP is the party that can provide the answers—and it will do so by seeking support right across the community. Now, I’m realistic enough to know it will be a slow process but our direction of travel must be clear. The critics who doubt that we can achieve this goal, are the same ones who scoffed at the thought of the DUP becoming Northern Ireland’s largest party. The reality today is that the ‘left’ and ‘far left’ policies of both of the nationalist parties leave many Catholics effectively disenfranchised. As the leader of the party that seeks to represent the whole community I’m not prepared to write off over 40% of our population as being out of reach. And I know that building this new constituency will require as much of an adjustment from us as it will require a leap of faith from those whose votes we seek.” 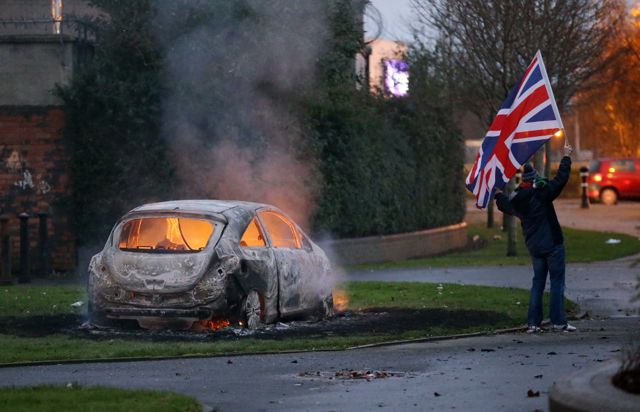 It’s the sort of thing political parties do. Survival depends on recognising demographic, electoral and political realities and adapting accordingly. So making the DUP a more attractive option for small-u unionists in east and south Belfast (where the DUP would like the scalps of the UUP’s Michael Copeland and Michael McGimpsey) makes perfect strategic sense. And if it allowed Mr Robinson to look like a confident, happy-in-his-unionist-skin moderniser, then so much the better.

Yet just three weeks later the DUP stands accused of whipping up hatred against Alliance: the sort of hatred that has seen Alliance offices burned down; homes paint-bombed and their elected representatives threatened with both physical violence and death. The DUP says it did nothing of the sort, arguing that the 30,000 leaflets distributed across Belfast merely encouraged voters and the general public to challenge Alliance’s position on the flying of the Union Flag at Belfast’s City Hall.

I’m sorry, but that defence is disingenuous. You cannot accuse a party of siding with Sinn Fein’s determination to remove the Union Flag and then feign surprise when elements of those who received that leaflet decide that their ‘protests’ will not be peaceful. It may not have been intended to be a bullying tactic, but that’s certainly the impression it conveyed. Whatever your view of what Alliance did they should not have been singled out. The DUP may not have organised one single protest, but those leaflets gave the protesters a sort of faux legitimacy.

The past week or so has also conveyed another impression: namely, that unionism is still not very good at making a case and advancing a cause. So, instead of an attack dog leaflet against Alliance (which would, in any case, have made it very difficult for them to change their minds), why didn’t the DUP try a more subtle approach? Yes, by all means distribute a leaflet, but use it as a vehicle for a series of questions, responses and suggestions.

There you are, a reasoned, considered and non-inflammatory approach: an approach that would have allowed Alliance to exercise a balance-of-power role that could have been easily explained and justified. And it would also have allowed the DUP to continue with the sort of language and strategy set out in Robinson’s speech.

There is a tendency, of course, for unionism to still prefer the kneejerk and megaphone to the calculated response and thought-through strategy. Pitching Alliance as the bad guy in all of this was never going to be a winner, particularly since it is unionism’s electoral underperformance which has put Alliance in the balance-of-power position. So instead of blaming Alliance – unionists should have been asking themselves why their vote has collapsed. Actually, instead of 30,000 leaflets putting the boot into Alliance the leaflets could have been used to ask unionists why they weren’t voting in the same numbers as they used to for the DUP, UUP and PUP?

As for the UUP!!! When Tom Elliott was pushed aside it was because he was considered inarticulate, uninspiring, devoid of vision, unappealing to pluralist/moderates and pushing the party too close to the DUP. Each and every one of those criticisms now applies to Nesbitt. If there is now any particular, discernible difference between the UUP and DUP (apart from their electoral performances) then maybe someone could point to it. Indeed, there have been so many joint statements, meetings, letters, leaflets and initiatives that it’s becoming increasingly difficult to avoid the conclusion that the UUP is a wholly owned subsidiary of the DUP.

For example, why did the UUP get dragged into the business of the joint letter (DUP, Loyal Orders etc) about the threats posed by the decisions of the Parades Commission? Probably because some people thought it would make them look like big-boy players. It didn’t. Again, why the joint leaflet about Alliance? They were just putting their imprimatur on the sort of stuff that the DUP used to churn out about them from 1997 to 2003.

To all intents and purposes Nesbitt is turning the UUP into a cold house for the very sort of people the party needs to attract if it is to survive. Pluralists are drifting away (just look at three recent polls which has the UUP barely clearing 10%). Voters who could have been lured away from Alliance will have been appalled by the joint leaflet. Some former voters who had abandoned the party under Elliott will not be returning if the links with the DUP continue to grow. Pro-Union Catholics who might have been initially attracted by the supposedly urbane, sophisticated Nesbitt will not have been impressed by his flirtations with the DUP, either.

The UUP is in freefall. No MPs. Just 3 councillors in Belfast. Down to 13 MLAs (believe me, both McCrea and McCallister will go). Almost 65% of their membership is over 45. Opinion polls continue to indicate no end to the downward spiral. Yes, there may be little pockets of revival and success here and there, but nowhere on the scale required for lasting survival. Bit by bit it has been devoured by the DUP and it now looks like Nesbitt is just handing over the rest of the body.

Meanwhile, the unionist/loyalist working classes still seem to be disenfranchised. I’m not sure who speaks for them. The DUP and UUP would claim to be opening doors, but I’m not convinced there’s anyone in the rooms. The PUP hasn’t made any sort of breakthrough. The same may be said of the so-called ‘garden centre Prods.’ They, too, have disengaged from politics and don’t appear to be all that interested in the pan-UK unionism alternative offered by the Conservatives.

All of which begs one pretty big question: what, exactly, is unionism doing? The DUP and UUP are morphing into one entity, whose sole priority is a numbers game geared at keeping the leader of the DUP in the First Minister’s office. But where’s the thinking? Where’s the solid promotion of the Union. Where’s the setting out of a pluralist vision and agenda for the new era Northern Ireland? Where’s the relentless deconstruction of the inanity of Sinn Fein’s socio-economic policies? Where’s the taking-of-the-message into the heartlands of republicanism; the public meetings and the door-knocking campaigns? Where’s the strategy for accommodating a new generation which prioritises a ‘Northern Irish’ identity? Where’s the strategy for reaching out to those growing sections within the pro-Union community who feel disenfranchised? Where’s the legislative vision to engage and attract everyone?

Unionism is about more, much, much more than flags and symbols. The greatest confidence flows from the strength of your arguments and the successful promotion of your cause and beliefs. It really is about time that unionism took that on board.