You are at:Home»News & Current Affairs»Opinion»The Politics of Delusion: Lessons from the former Yugoslavia
Social share: 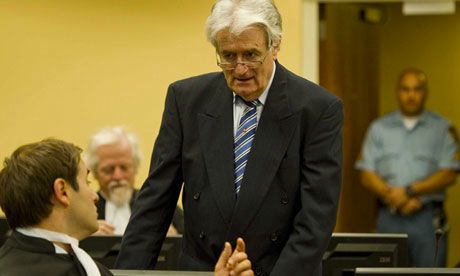 Anyone familiar with the Northern Irish predilection towards harnessing historical myths for political ends would not have been surprised by Radovan Karadižić (pictured above) recent delusional defence at The Hague.

Karadižić informed the International Criminal Tribunal for the former Yugoslavia that he was in fact a ‘peacemaker’, not a war criminal: ‘Instead of being accused [for the murder of 8,000 men and boys in Srebrenica], I should have been rewarded for all the good things I have done. I did everything in human power to avoid the war. I succeeded in reducing the suffering of all civilians’.

Although South Africa’s Truth and Reconciliation Commission is often held up as an example to be copied in Northern Ireland – no more so than during the years of the stop-start devolution project after 1998 – that transition provides a false analogy.

On the one hand, the ‘solution’ to South African apartheid was the introduction of democracy. Paradoxically, democracy in Northern Ireland is the problem where questions of balancing rights, creating consensus, ensuring accountability all remain deeply contested.

On the other hand, the truth recovery process in South Africa had been agreed before power was handed over – questions of culpability, punishment and reparation had been effectively ‘fudged’ during negotiations between the National Party and the ANC by relegating by joining amnesty to reconciliation by describing certain crimes as ‘political’.

Do the ethnically divided societies of the former Yugoslavia offer a closer ‘fit’ to Northern Ireland?

It must be admitted that the differences vastly outweigh the similarities. The scale of killings in the Balkans – particularly during the Bosnian War (1992-1995) – exceed the worst atrocities during the Northern Irish conflict.

While both Northern Ireland and the former Yugoslavia are struggling to come to terms with ethnically inflected historic divisions, that process is complicated in the latter region by the need to move beyond the legacies of the authoritarian, Communist past.

In both regions, peace accords promised ‘to promote enduring peace and stability’ (Dayton Agreement, 1995) and a ‘new beginning … a fresh start’ (the Belfast/Good Friday Agreement, 1998). Yet, well over a decade on, in both Northern Ireland and the former Yugoslav states, elite divergence reflects wider societal segregation.

Likewise, calls for greater social cohesion in both regions struggle in the face of party political desire to maintain intra-bloc unity.

Coming to Terms with the Past in the Balkans

The International Criminal Court for the Former Yugoslavia (ICTY), complemented by national judicial processes, was designed to prosecute and try individuals of offences covering grave breaches of the Geneva Conventions, violations of customs or laws of war, genocide and crimes against humanity.

Side-stepping amnesties, trial and prosecution were the central method of dealing with the past in the emerging regimes and the wider international community. 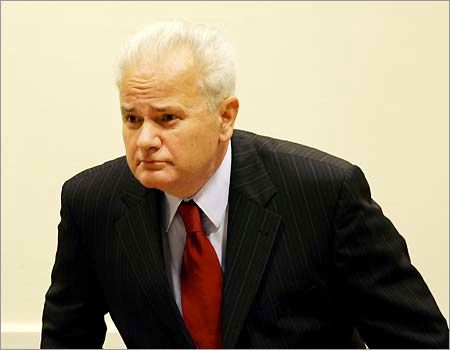 The judicial process steered attitudes, policy and transition from impunity to accountability and truth seeking by individualising and personalising guilt. The ICTY has been host to a former head of state – Slobodan Milosevic (President of Serbia), and leading political and military leaders.

The process of individualising guilt eroded the idea that everyone was to blame for the conflict, a crucial precept of mobilising the safe return of displaced persons and reconciling deeply traumatised and divided communities.

In 2005, Croatian President Mesić recognised that trust is a central tenet of restoration and that reconciliation necessitated the establishment of individual rather than collective guilt: ‘through the process of individualising the guilt, we have removed that scar. Croats and Serbs are being made accountable. It will put a stop to collective guilt’.

The influence of the international community on the nations of the former Yugoslavia, specifically the United Nations and European Union, on this judicial process is all consuming.

On the one hand, the rewards of membership, economic incentives, visa liberalisation and closer economic and political relations catalysed, in part, co-operation in the former Yugoslav countries with the ICTY and judicial processes.

On the other hand, the potential for stalling, limiting and denying these rewards to the aspiring countries over a perceived lack of compliance blanketed a sentiment of international condemnation and punishment over entire nations in Bosnia, Croatia and Serbia.

In 2007, one leading Serbian academic critiqued an EU stalling tactic which denied progress being made on Serbia’s EU membership bid: ‘Though there are lists of individual Serbs accused of war crimes, at the same time the entire Serbian nation is being held guilty for those same crimes” therefore, the “only way out is the individualisation of crime’.

Moreover, the recent decision to anonymise cases by keeping the name of those on trial from public view eliminates wider society and victims from the truth and justice process.

In the Balkans internationally driven judicial processes have meant that peace and justice are fused. Securing peace without justice carries its own burdens.

Co-operation with the judicial process has been far from straightforward in the Balkans and at times politics clings fiercely to the past, retelling and reliving events through each perceived ‘truth’. The process of transforming perceived ‘heroes’ into ‘war criminals’ is not without its contestations.

The establishment of facts about the past, however, has been made possible through the investigations at the ICTY and national courts but what is to be done with such material?

The findings of the ICTY point to the idea that truth and reconciliation is not only about recovering historical facts, but also involves revealing them – in other words, finding appropriate ways of making them public.

However, in deeply divided societies such as Northern Ireland or the Balkans, polarised ethnic narratives themselves are founded in assertions of ‘truth’.

In other words, recovering truth is problematic in itself but often the revelation falls short because it can and, indeed, must confront those ethnicised claims.

In the Balkans, the dynamic between the international and indigenous means that the recovery and revelation of ‘truth’ is manipulated by stigmas of societal victimhood created by a lasting imprint of international intervention.

Often a sense of victimhood and persecution of an entire community prevails. It can be perceived that the dominant narrative of the recent bloodied past leaves blame most heavily with one country or grouping and this shapes any outworking of engagement with judicial and truth seeking processes.

Legacies of the Past

The creation of the ICTY has had a profound influence on the debate. For example, efforts by the United States Institute for Peace to establish a reconciliation commission during the late 1990s and into the first decade of the new century resulted in deadlock: international actors preferred to see suspected war criminals pursued through the juridical auspices of the ICTY.

Some victims’ groups were concerned with other avenues of legal redress – gaining official recognition and compensation, for example.

Meanwhile, the political will within the region to facilitate a reconciliation commission was virtually non-existent (that is, beyond vague platitudes). 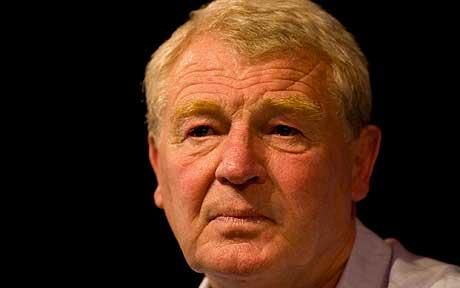 Although the intervention of the High Representative, Paddy Ashdown in recalling the commission investigating the Srebrenica massacre (after its first report was stymied by overt internal political interference), has been seen in a recent book by the respected journalist Ed Vuilliamy as cathartic: for the first time, ordinary citizens were forced to face up to the facts of the past.

Yet, the impetus behind that intervention stalled. It was not followed up by any further political interventions or any distinct policy changes.

As a result, it is easily ignored: as one Muslim resident of Srebrenica has pointedly complained: ‘the whole Drina river valley is full of Karadzics and Mladics who still walk free, and haven’t even been indicted for the crimes they committed’. Indeed, one can easily add, it is not just that war criminals walk free that is at issue, but that they are eulogised by local populations.

The lesson from the former Yugoslavia then is straightforward: ignoring the institutional context in which debates about working through the past occur risks condescension and borders on surreality.

The idea that it is possible to frame ‘truth’, ‘justice’ and ‘reconciliation’ can be divorced from political realities is a Sisyphean nonsense. These terms are invested in political and moral significance at their very core.

The ideas that societal reconciliation or understanding can come about by exchanging stories, experiences and memories or that ‘truth’ can be recovered from the aspic of bloody violence are not just naive or surreal, they are positively harmful.

Just how everyone’s voice can be heard at a societal level when society’s such as Northern Ireland’s or the former Yugoslavia’s remain deeply and institutionally fissured is a question that needs to be taken seriously.

Unfortunately, the general tenor of the debate in Northern Ireland, at least, seems to shy away from that imperative, indulging instead in well-meaning platitudes, self-aggrandizement and self-exculpation.

This opinion is surely correct in asserting that there is a danger of reproducing the very ideas and beliefs that sustained conflict. However, it just might be the case that victims and survivors and the vast majority of the people in Northern Ireland have already heard what ‘the perpetrators’ have to say. Indeed, they barely stop talking about it. The point being that if ‘victims’ are considered to be those who have been marginalised and rendered voiceless by violence, expecting some kind of understanding to come from putting them in a room with those who inflicted the violence in the first place is absurd and borders on the disingenuous.

If the Balkan case illustrates the limitations of juridical methods in achieving this goal, then the Northern Irish case similarly reveals the dead-ends involved in placing too much faith in extra-judicial, restorative justice-type measures.

One ‘lesson’ that might be forwarded is that if we are to avoid the extremes of delusion exemplified in both instances, efforts must be made at restoring dignity and voice to those who have suffered most from the conflict.

The above article was co-authored by Cillian McGrattan. Cillian lectures in Politics at Swansea University. He received his PhD from the University of Ulster. His books include Memory, Politics and Identity: Haunted by History (Palgrave Macmillan, 2012);Everyday Life after the Irish Conflict: The Impact of Devolution and North-South Cooperation(Manchester University Press, 2012) (co-edited with Elizabeth Meehan); Northern Ireland, 1968-2008: The Politics of Entrenchment (Palgrave Macmillan 2012); and The Northern Ireland Conflict (Oneworld, 2010) (with Aaron Edwards).