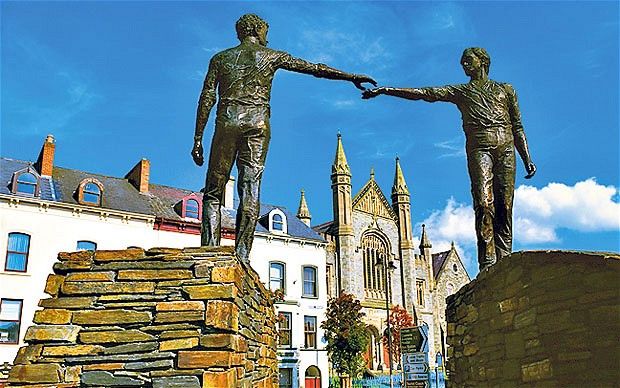 In a recent exchange between Declan Kearney and Jeffrey Donaldson (following Kearney’s latest ‘reconciliation’ speech in, of all places, the House of Commons) Kearney said: “What we need in a discussion about reconciliation is to drop the recriminatory language, to drop the whataboutery. Everybody should drop the whataboutery. Let’s accept that there’s a lot of heavy lifting to be done in the process still: that we need to give a voice to everyone.”

If someone asked me to define whataboutery I would say it’s the deployment of finger-pointing and distraction when people would rather not answer questions about their own past behaviour or opinions. We saw a classic example of it a few days ago when Ann Travers appeared before the Assembly’s Finance and Personnel Committee to give supporting evidence for Jim Allister’s Private Member’s Bill about the appointment of ministerial advisers.

In explaining why she opposed the appointment of people with serious criminal convictions she said: “I do feel this Bill would be a signal for all victims, even for victims who are looking for answers elsewhere, it would be a very strong sign that actually victims are being supported.” This was the response of Mitchell McLaughlin, Sinn Fein’s former chairman: “..there is a long history here and we are trying to deal not with what Mary McArdle did as an individual, we are trying to deal with why weren’t these issues addressed in the past”

Seriously!! A young girl was shot dead by the IRA and that’s all McLaughlin can say? Crossing the road after going to Mass; side-by-side with her Dad; being in the wrong place at the wrong time and McLaughlin — seemingly incapable of saying sorry and meaning it —argues that Mary Travers was killed because “issues (weren’t) addressed in the past.”

Or look at what happened in the Assembly on Monday when Jim Wells’ alleged ‘aggressive behaviour’ towards Mary McArdle and Caral Ni Chuilin led to a censure motion against him. It struck many people—myself included — that Sinn Fein was being remarkably thin-skinned. They complain about finger-wagging aggression in a corridor but can’t bring themselves to say that the IRA’s terror campaign was utterly pointless, utterly immoral and utterly unjustified.

So not much sign of the ‘reconciliation’ Kearney talks about. Nor in Caitriona Ruane’s comment that Wells’ behaviour was an example of ‘anti-Catholicism, sectarianism and misogyny.’ I wonder what she would have said about him had he a conviction for murdering people who were Protestant, Unionist or British?

Now then, as I have been saying since Kearney’s first ‘reconciliation’ article back in March, it strikes me that any reconciliation process cannot succeed if it is led and directed by a political party; and particularly by a party like Sinn Fein. Political parties bring too much baggage with them and the accompanying temptation to blame ‘the other side’ for starting the conflict.

The other very important reality to acknowledge is that Northern Ireland is not like South Africa. Unionists and Nationalists here still disagree on the very existence of Northern Ireland. Nationalists — even if they have bought into the general parameters of the Belfast or St Andrews Agreements — still want and still work towards a united Ireland. In other words, they want Northern Ireland to disappear. For them it remains a headcount campaign, a never-ending propaganda/electoral effort to tip the balance in their favour: meaning, of course, that it remains a continuing headcount campaign for Unionists, too.

I would contend that it is not possible to achieve ‘reconciliation’ against a background in which the key players do not agree on the constitutional and geographical integrity of the country they are supposed to govern together. Unionists do not want a united Ireland and they will never want a united Ireland. Nationalists want to see the end of a United Kingdom in which Northern Ireland is a constituent part. The political parties, for the most part, reflect those basic, brutal realities. Even Alliance, which sets itself up as a halfway house between the two, is, to all intents and purposes, a product of a divided society and polarised political opposites — which explains why it has never really made a breakthrough.

What do we do, then, if ‘reconciliation’ (in the generally accepted sense of the word) seems to be a non-runner? Well, maybe we just accept that we are lumbered with conflict stalemate rather than conflict resolution and try and make the best of an unsatisfactory situation. Declan Kearney is not going to persuade me to abandon my unionism and I am not going to persuade him to abandon his republicanism.

That said, we cannot continue to nurture a political process in which mutual antagonism is counterbalanced with a mutual veto. Fine, the Assembly and Executive can probably stumble along at a purely administrative level, doing the sort of day-to-day stuff that a Direct Rule ministerial team could do. But it will not be able to go beyond that and produce, let alone promote, a collectively agreed agenda for a genuinely new era, post-conflict Northern Ireland. How does such an Executive engage with and enthuse an electorate which sees precious little evidence of a legislative programme or vision relevant to their everyday lives and concerns?

Many commentators have pointed to the very significant downturn in voter turnout since 1998, tumbling from 68.8% to 54.7%. Yet it is worth noting that the biggest drop was between 2007 and 2011—after four years of the so-called stability provided by the DUP/Sinn Fein carve-up. Does this suggest that increasing numbers of former voters, along with many others who have never started to vote, feel themselves disconnected (maybe even disenfranchised) from this stalemate and veto? Does it, on the other hand, suggest that most of us are so content with the new status quo (and detect no immediate threats to it) that we don’t feel the need to vote? Or, more worryingly, are increasing numbers of people so turned off by the Sinn Fein/DUP love-in (and the absence of any obvious alternative) that they refuse to go near a polling station?

The psychologist George Allport listed five stages whereby opposing groups can come to terms with each other. The first is Curiosity: when they ask questions like ‘why do they do that’ or ‘why do they behave like that’? From that stage they move on to a very general phase of Dialogue: teasing out answers to questions raised by Curiosity and discovering areas for discussion. Then comes Communication: which involves opening channels between all levels and sub-sections within the opposing groups and ensuring that no significant sections are left behind.

Then comes Living with Difference: when the groups accept that if they cannot actually ‘beat’ each other then they need to accept that they can live with their differences. Finally they have reached the point of Overcoming Threat, when, having worked their way through the other four stages they stop seeing each other as ‘The Enemy’.

Could Allport’s structure lead us to some sort of reconciliation? Again, I’m not sure. Like the dreary steeples of Fermanagh and Tyrone the issues of shifting demography and contradictory positions on Northern Ireland’s constitutional status are not going to go away. If they are not going away then I’m not sure how opposing groups reach the point at which ‘The Threat’ (of being obliged to stay in the UK or being forced into a united Ireland) has been removed enough for them to simply live with their differences. And if people can’t live with their differences then they will continue to live, socialise and educate apart.

This is ‘The A Team,’ ‘Mission Impossible’ moment. The task for the next generation — if you can find them and if they accept it — is to find the solution to this conundrum. If we can’t agree on a reconciliation process; or a truth process; or a dealing with the past process; or a shared future process; then how do we move to the point at which we can stop looking over our shoulders and start looking forward? Peter Robinson says that he and Sinn Fein have the long awaited Cohesion and Social Integration strategy almost ready to roll out, but I would be very surprised if it isn’t, in fact, an enormous stick of seaside rock with the word stalemate running right the way through it.

The present generation of former warriors and cement-footed political parties is not going to be able to drop the recriminatory language or whataboutery. It’s all they know. It’s all they have ever known. They are too old and too set in their ways to learn new tricks: so set in their ways that they have already lined up the spanky new clones to fill their shoes and seats.

At some point we have all been told: ‘you broke it, so you can fix it’. When it comes to Northern Ireland, though (and I am as guilty of this as anyone else), nobody will admit to breaking it. And without that admission — and the necessary acts of contrition, confession and healing—it will not be possible for this generation to fix it.