You are at:Home»News & Current Affairs»Raging Bull – no knockout but Obama wins on points
Social share:

Last night was the night Barack Obama had to come out fighting.

After his insipid performance in the first Presidential debate in Denver, the President needed to look as though he was up for a scrap with Mitt Romney.

Gone was the Barack Obama who looked during the first debate like he was on a half tank.

Gone was the Obama who could not eyeball his opponent. 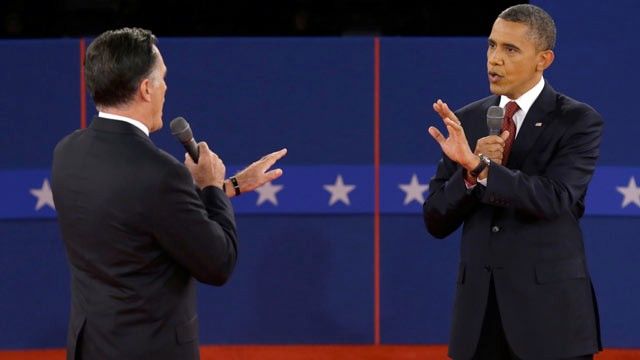 In the more combative arena of the Town Hall debate, this Obama looked like he had been sparring all week with Joe Biden.

The town hall format of Presidential Debate offers no hiding places. There are plenty of opportunities to slip up in substance and style – remember Al Gore’s attempts to intimidate George W Bush or John McCain’s prowling around the stage in 2008?

There are also plenty of opportunities for the candidates to score on style and show voters just how empathetic they can be.

On that front, Mitt Romney and Barack Obama did pretty well.

In 1992, Bill Clinton famously showed how candidates could make the format work for them when a woman asked what his and President George Bush Snr’s personal experience was of the economic downturn.

President Bush’s response was to sit on his stool and ask her to repeat the question because he didn’t quite get what she was driving at.

Clinton instead took a step towards the woman, asked her how it had impacted on her and then reamed off stories about people in his own state and on the campaign trail to show how he understood exactly what she and her friends had experienced.

Both Romney and Obama were in Clinton mode last night, hopping on and off their stools once they were beckoned by Debate Moderator Candy Crowley to engage an audience of 80 undecided voters at Hofstra University in New York.

A question from Jeremy, a college student on how they would give him a chance as a graduate to gain employment, saw both candidates immediately engaging him, commending him on his question and then punching hard at each other on the facts and figures around unemployment and the auto bailout. 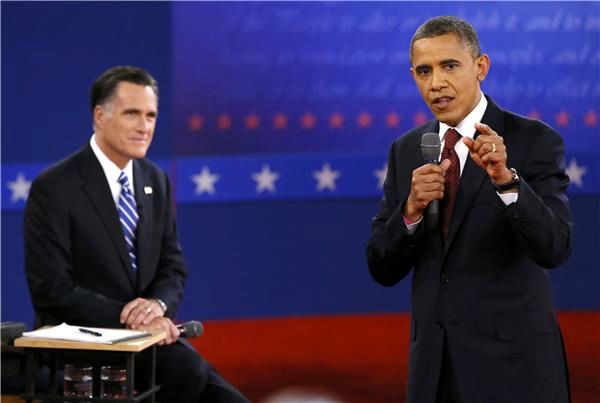 Obama on the attack

Governor Romney’s strategy was to repeat the tactic from Denver of bombarding his opponent with unfavourable stats.

There are 23 million people unemployed in the US and fewer people are working than when the President took office, he noted. The unemployment rate was 7.8% when Barack Obama took office, as it is now according to official figures, but he claimed if you include people who dropped out of the workforce it would actually be 10.7%.

On the auto industry bailout, the Republican argued that contrary to the White House’s claims, President Obama did precisely what he had advocated – taking the car manufacturers in Detroit through bankruptcy so they could emerge stronger.

“He wanted to take them into bankruptcy without providing them any way to stay open. We would have lost a million jobs. Don’t take my words for it. Take the words of the executives at GM and Chrysler – some of whom are Republicans and supporters of Governor Romney.”

He also dismissed Governor Romney’s claim that he had a five point plan for the economy, claiming it was a one point plan to ensure that those at the top played by a different set of rules.

A question on gas prices and energy policy saw Mitt Romney adopt bare knuckle tactics as he honed in on the President over the issuing of federal licences and permits on oil drilling.

Here the body language was telling.

As Romney tried to eyeball him, President Obama refused to let him pin him down. The President ducked and weaved and danced around the stage – forcing his challenger to pursue him as he insisted the Republican was not telling the truth. The result was Romney looked less confident than he had in Denver as his opponent robustly defended his position.

Time and again, as Romney repeated his trick of rolling off points and portraying the President as a failure, Barack Obama jabbed back at him with allegations that he was not telling the truth.

In the early stages of the debate as Obama stood up for himself and counterpunched, Governor Romney looked more uncomfortable than in Denver.

When the Republican tried to steamroller Candy Crowley at the end of some questions to get his point across in the way he had brushed aside the ineffectual Jim Lehrer in the first debate, he looked peeved when she held firm. As a result, he came across a little tetchy and, at times, whiny when she would not budge.

To Governor Romney’s credit, he performed decently on questions about the differences between him and President George W Bush and how he had been portrayed by the Democrats.

However the difference between Denver and Hofstra was Obama was counterpunching and managed to land a few blows.

An attempt to tackle the President about Chinese investments and his pension backfired as Obama quipped that he knew his pension was not as big as Governor Romney’s – triggering polite applause and some laughter.

Mitt Romney also appeared to lose his footing when going on the offensive about the attack on the Consulate in Libya, accusing President Obama of failing to condemn the incident as an act of terror for two weeks.

Adopting the role of fact checker, moderator Candy Crowley backed the President’s claim that he had described the incident the following day in the White House’s Rose Garden as an act of terror.

Even his attempt to insist he would serve 100 per cent of Americans handed the President the opportunity to remind voters to watch the leaked video of the Republican writing off 47 per cent of the electorate as spongers who would vote for the Democrats regardless. 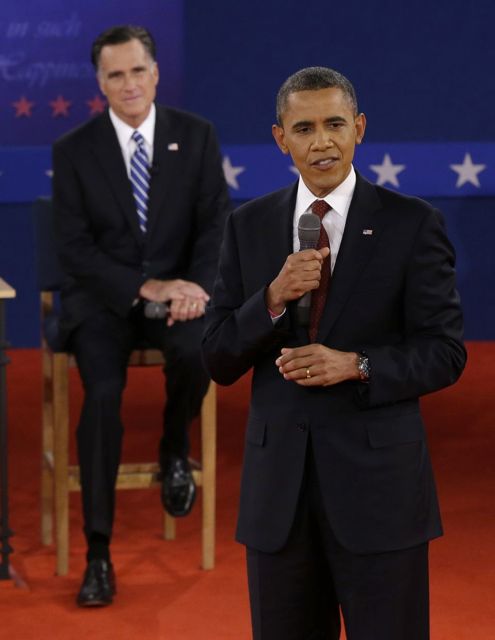 Barack Obama out in front…?

The Conservative commentator George Will enthused on ABC News’ coverage of the Presidential debate that it was the best he had ever seen.

“I think there was a winner in the sense that Barack Obama not only gained ground he lost but he cauterized some wounds that he inflicted on himself by seeming too diffident and disengaged,” he observed.

“It was a very good fight. I have seen every Presidential debate in American history since the floor of Nixon and Kennedy in 1960. This was immeasurably the best.”

MSNBC’s Chris Matthews also thought it was the best debate performance Obama has ever given.

In reality, after Denver, Mitt Romney was always on a hiding to nothing.

While Romney’s assured performance in Denver raised his camp’s expectations, expectations for Obama had lowered significantly. So a more feisty Obama was always going to score heavier in the town hall format.

Last night, he did not deliver a knockout blow last but there was no doubt President Obama won this bout on points.

How much of what was said last night swayed voters in a polarised America remains open to question but roll on the third and final debate in Florida.