You are at:Home»News & Current Affairs»It was chess, Jim, but not as we know it… Romney versus Obama – take three
Social share:

Four years ago, the Huffington Post claimed Barack Obama had approached the Presidential Debates like chess while his opponent, Senator John McCain appeared to be playing checkers.

Last night’s third and final Presidential debate of 2012 was, at times, like a game of chess with each candidate trying to anticipate and block attacks from the other.

However, it was a game of chess whose players had clearly forgotten to take off the previous week’s boxing gloves. 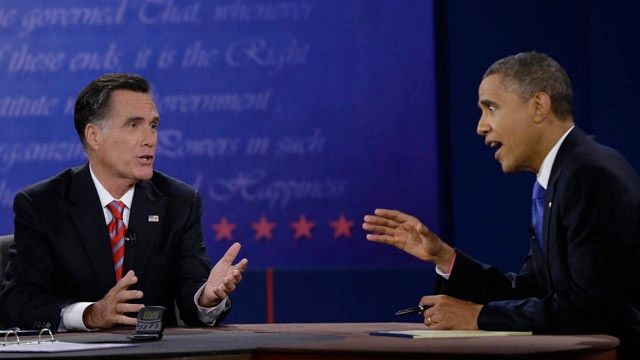 Occasionally, amid all the smart defensive strategies, Barack Obama and Mitt Romney seemed to want to lean over the table, sweep their pawns aside and land punches on the other.

Korchnoi and Karpov, this wasn’t.

The debate covered a wide range of issues from Libya and the death of the US Ambassador, to the nuclear threat posed by Iran, the relationship with Israel and trading with China.

But as MSNBC’s Chris Matthews pointed out afterwards there were other key foreign policy issues which were notable by their absence during the debate.

Where was the discussion on the economic woes that have beset Europe (apart from Mitt Romney’s closing argument that the President’s policies would propel the US into the same economic crisis as Greece)?

Where was the discussion around the international drugs trade and, in particular, the supply of illegal drugs from Latin America blighting many US cities?

Why focus solely on relations with China and, to a much lesser degree, Russia when India and Brazil are also emerging economic powers?

Under the chairmanship of Bob Schieffer, the debate got bogged down for far too long on the Middle East – the threat posed by Iran, the problems of Egypt and Syria, the relationship with Israel.

As for Barack Obama, it was another energised performance from the President – a far cry from the sluggish Democratic candidate we saw in the first debate in Denver.

In a foreign policy debate where all incumbents have a distinct advantage, he skilfully dealt with the shrill arguments about what went wrong in the US Consulate in Benghazi and also managed to land a few punches on his Republican opponent around his rhetoric on Russia and China.

His rehearsed swipe at Romney around his rival’s balanced budget pledge to cut taxes and spend more on the military will no doubt have delighted Democrats who were dismayed by the lack of fight in Denver.

“I think Governor Romney has maybe not spent enough time looking at how our military works,” the President retorted.

“You mention the Navy, for example, and that we have fewer ships than we did 1916. Well, Governor, we also have fewer horses and bayonets because the nature of our military has changed.

“We have these things called aircraft carriers where planes land on them. We have ships that go under water – nuclear submarines.”

While this may have seemed a clever retort, the condescending tone in which it was delivered may have jarred with some undecideds, coming across as a little arrogant.

Romney, for his part, repeated the same tactics from previous debates – painting the President as a weak leader and reaming off points to illustrate how he could do better.

And so we had persistent images of “chaos and tumult” in the Middle East and also America being “four years away from a nuclear Iran” with its “spinning centrifuges”. 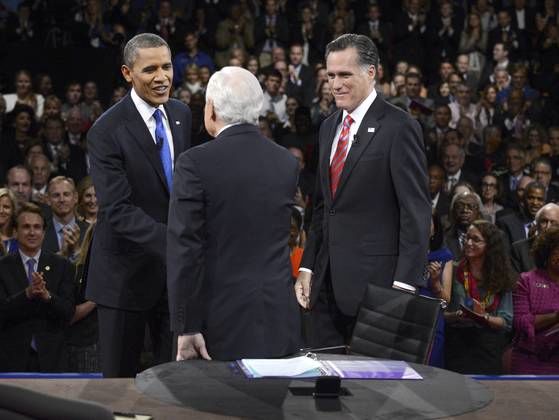 Governor Romney supported sanctions against Syria and Iran but told his audience his would be tougher. Like the President, he wanted a good trading relationship with China but it would have to be better. Like President Obama, he believed Israel is America’s friend but the relationship needed to be stronger.

His flurry of punches came during a spat over whether the Democratic incumbent had been on an apology tour of the world in his first year in the White House.

After President Obama described this as the biggest whopper of the campaign, the Republican responded: “The reason I call it an apology tour is because you went to the Middle East and you flew to Egypt, Saudi Arabia, Turkey and Iraq – and by the way, you skipped Israel, our closest friend in the region, but you went to the other nations and, by the way, they noticed you skipped Israel – and in those nations on Arabic TV you said America had been dismissive and divisive. You said on occasion America had dictated to other nations.

No knockout blow was landed by either candidate in this contest and there certainly was no check mate either.

As all the post debate polls have suggested, President Obama won the the contest on points just like he won the second debate.

But Mitt Romney did enough to suggest he might yet win this race.

For undecideds, there was very little to get excited about. It lacked the spark of the previous debate and on many issues, the candidates were largely on the same turf.

But ask yourself this. Was foreign policy ever really going to sway US voters this time around? It’s difficult to see how, in an election year when Americans are concerned about the state of the US economy.

And that is why, as the debate wore on in Boca Raton last night, the issue of America flexing its economic might began to assert itself more and more.

Just look at the closing arguments.

President Obama’s final debate pitch to voters was: “Over the last four years, we have made real progress digging our way out of the policies that gave us two prolonged wars, record deficits and the biggest economic crisis since the Great Depression. Governor Romney wants to take us back to those policies.”

Governor Romney’s closing remarks concentrated on the two different paths offered by him and President Obama. 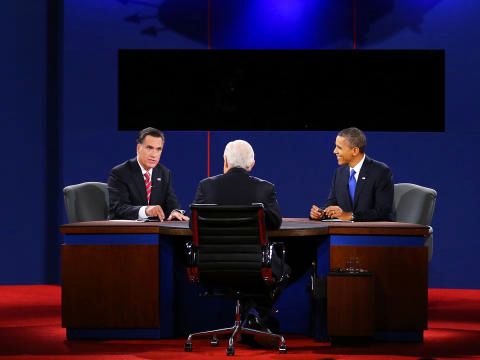 In short, it is still the economy stupid.

It always has been and it always will be.

Romney, however, threw in an uppercut at the end. As Governor of Massachusetts, he claimed he had worked effectively with a Democratic Party controlled state house. In his view, President Obama could not work across the aisle.

And there’s the rub.

Since entering the White House, President Obama has faced a barrage of criticism both from conservative commentators and from a Republican Party which has been dragged further and further to the right by the Tea Party.

Right from the start of his Presidency, there was little evidence his opponents were willing to work with him across the aisle.

The key question facing US voters this November is this: after the most divisive election in living memory, will Republicans and Democrats on Capitol Hill really be able to work with a President of the opposite hue?

And even if they are so inclined, will they be allowed to work together amid all the boorish rhetoric on the airwaves from conservative commentators on Fox News and liberals on MSNBC?

At this stage, it’s hard to see either President Obama or a President Romney managing that feat.

But make no mistake about it, America desperately needs moderates on both sides to assert themselves.

The debates are over. It is all about getting out the vote over the next two weeks.

But will those returned to Washington be allowed to bridge the sharp divide between either side?