You are at:Home»News & Current Affairs»Here’s one I prepared earlier – the analogue television years
Social share:

The era of analogue television is nearly over.

The disappearance of BBC2 as an analogue station from our TV screens today marks the beginning of the solely digital TV age.

And with the second part of the digital switchover taking place on October 24, viewers in Northern Ireland will get new high definition TV channels on Freeview as well as a new Belfast based TV channel next year, two RTE channels, TG4 and, if they are lucky, the rest of the Saorview service from the Irish Republic. 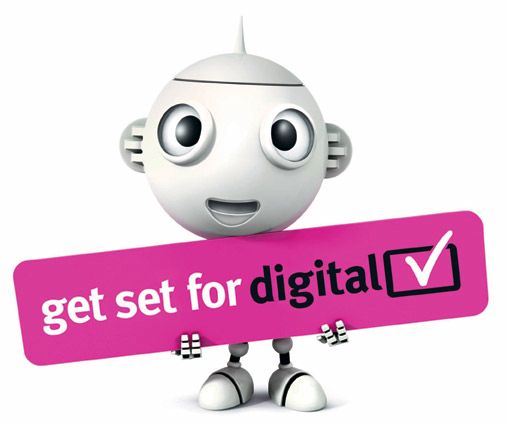 So as we enter a new age, it seems appropriate to reminisce about the analogue era. I will be doing that with a series of 10 articles over the next fortnight.

So where do I begin?

With my top ten memories of children’s television, of course:

For those of us brought up in three channel land, ‘Play School’ was an integral part of our infant lives. However ‘Play Away’ felt more like a coming of age programme.

Pitched at an older primary school audience with the same ‘Play School’ presenters – Brian Cant, Toni Arthur, Derek Griffiths, Johnny Ball and Floella Benjamin – it was broadcast on BBC2 on Saturday afternoons and seemed a little more chaotic than its cousin.

Performed before a live studio audience, there were stories, games, jokes and songs. It also provided an apprenticeship for up and coming actors like Jeremy Irons, Anita Dobson and Tony Robinson.

A programme that distracted you on many’s a wet Saturday, its influence can still be seen on children’s television today – most notably with C Beebies’ Justin Fletcher and his Mr Tumble character. 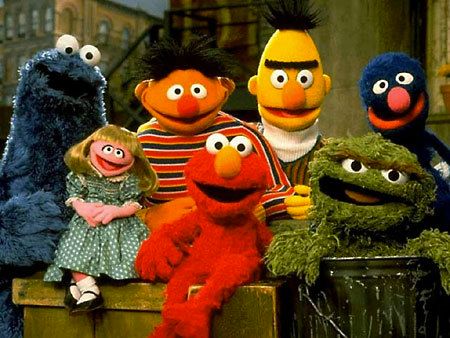 Forget what Mitt Romney said in Denver. Has there ever been children’s television that has been as consistently good as ‘Sesame Street’?

Originally broadcast on ITV on Saturday mornings, it combined astute comedy with educational songs and sketches. The writing is of such a high standard, just marvel on You Tube at the sharp writing of its Bruce Springsteen parodies, ‘Barn In the USA’ and ‘Born To Add’.

It introduced the world to Kermit the Frog, Bert and Ernie, Oscar, the Count, Cookie Monster, Grover and, of course, Big Bird as well as boasting animated characters like Solomon Grundy, Wanda The Witch and Fruita Manzana as well as its human cast of characters, Gordon, Susan, Bob and Mr Hopper.

Celebrities have been falling over themselves to appear on the programme over the years and the highly impressive roster includes Johnny Cash, Buzz Aldrin, Maya Angelou, Robert de Niro, Elvis Costello, REM, Ricky Gervais, Martina Navratilova, Katy Perry and our own Liam Neeson.

‘Blue Peter’ still survives to this day and gave us the memorable incident with Lulu the Elephant.

But for my generation, ITV’s answer to ‘Blue Peter’ has a special place in our hearts. With its funky theme tune of an old nursery rhyme performed by the Spencer Davis Group under the name, The Murgatroyd Band and its presenters including Tony Bastable, Jenny Hanley, Tommy Boyd and Mick Robertson it seemed cooler, less 1950s, less stiff.

It regularly featured pop music and fashion while John Noakes, Lesley Judd and later Sarah Greene on the other channel were abseliling down mountains, growing vegetables and struggling with sticky back plastic.

Like the Sharks and the Jets in ‘West Side Story’, you were either a ‘Magpie’ fan or a ‘Blue Peter’ fan. But if you were really being truthful, you still watched both to confirm your prejudices.

In a house where the six o’clock and nine o’clock news was always on, it was no real surprise that I was glued to John Craven’s ‘Newsround’ and there is something strangely comforting about seeing the show still around on CBBC today.

John Craven helped explain a complex and at times tough world to children not ready for the harsh realities of life.

I can still recall to this day the programme breaking news of the assassination attempt by Mehmet Ali Agca of Pope John Paul II in the Vatican – this was long before the days of 24 hours news channels like Sky News, BBC and CNN.

And I still get a kick out of my daughter avidly watching the modern ‘Newsround’ today and then reporting back to me each morning what she has just seen.

John Craven had another role, of course, and that was as one of Noel Edmonds’ co-presenters in this groundbreaking live three hour BBC1 Saturday morning show.

Very much the BBC’s gentler answer to ITV’s more manic ‘Tiswas’, ‘Swap Shop’ was nevertheless a lot of fun and a lot of that was down to the chemistry of its presenting team.

It had outside broadcasts in the dead of winter from less than glamorous towns across the UK, it had live phone-ins, celebrity guests, a dinosaur called Pohs Paws (pronounced Posh Paws bur written that way because it was Swap Shop spelt backwards) and children swapping their toys with other children.

Ok, so the programme gave us Keith Chegwin and Maggie Philbin but it set kids nicely up for the rest of the day. When the programme makers decided in 1982 to hang up their boots after a six year run, they replaced it with Mike Read’s ‘Saturday Superstore’ which never quite had the same magic. 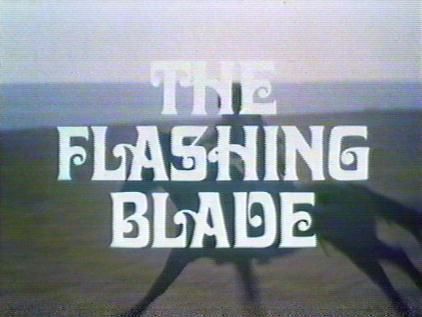 How could anyone not remember ‘The Flashing Blade’, a French TV drama about the 17th Century War of the Mantuan Succession between the French and the Spanish, badly dubbed in English?

Made in the late 1960s in France, it had cannons, swords, horses dashing through the countryside, lots of armour, castles. What more could you want?

Well, there was also a stirring theme tune about fighting for what you want – all rip roaring stuff.

With not an Englishman, Scotsman or Irish character in sight and two French heroes, it’s not the kind of programme you’d imagine a young Nigel Farage settled down to watch.

So you really want to know where my film buffery began?

Well, I told you it was ‘Jaws’. However this BBC1 children’s movie quiz also had a hand in it.

The contestants were shown film clips – often from movies made by The Children Film’s Foundation (films I have never seen to this day) – and they were then quizzed by Michael Rodd on what happened.

The programme ran for 14 years between 1970 and 1984 and featured clips on filmmaking before instigating a young filmmakers’ competition.

Among the prizewinners was a Czech emigre, Jan Pinkava who would later win an animation Oscar and co-direct the Disney-Pixar movie ‘Ratatouille’.

Looking back on it, this sitcom about a detective and his malfunctioning robot partner is probably one of the worst television series ever made.

But at the age of seven, with my critical faculties hugely underdeveloped, I adored this programme on BBC1.

Richard B Shull played the hard pressed Detective Alexander Holmes and John Schuck as his android partner, Yoyo who had super strength, could read a book by flicking through it at high speed, had a polaroid camera inside him which could be operated by pushing his nose and a tendency to repeat the phrase “Bunco Squad, Bunco Squad, Bunco Squad” when his circuits were about to blow.

Sophisticated humour, eh? I’d dread to see it now but for 30 minutes every week at the age of seven it kept me entertained.

Thank God, we have the nuanced wit of Alvin and the Chipmunks for our kids today. 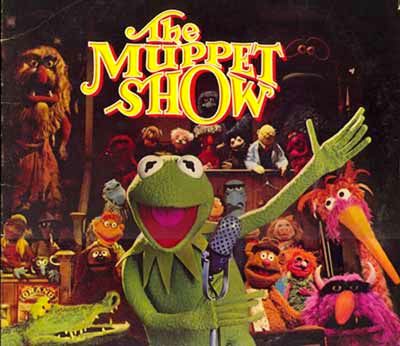 As last year’s 2011 movie reboot of ‘The Muppets’ proved, class is permanent and this show had it in spades.

Again featuring the puppets and vocal talents of Jim Henson, Frank Oz and others, its zany Vaudevillian humour had a sharp satirical bite.

With Kermit the Frog centre stage, it introduced us to Gonzo, Fozzie, Dr Teeth and the Electric Mayhem including Animal, Beaker, resident cynics Waldorf and Statler and, of course, Miss Piggy.

As with ‘Sesame Street’, some of the biggest names in show business queued up to be a part of it including John Cleese, Bob Hope, Rudolph Nureyev, Liza Minnelli, Steve Martin, Gene Kelly, Glenda Jackson and Alice Cooper.

This should have been way after my time but in the early 1990s something rather subversive was happening on the children’s strand on RTE’s channel, Network 2.

Two aliens from the Planet Zog were introduced to the people of Ireland first by Iain Dempsey and then Ray D’Arcy and became cult viewing.

They gave Dublin jackeen, Dustin the Turkey his big break (long before he was inflicted on the Eurovision Song Contest) and they were not afraid to wickedly send up any of the guests who dropped in including the newly elected President Mary Robinson (who Dustin accused of having smelly feet), Boyzone or Paul Brady.

And for those who followed the fortunes of Jackie’s Army during their European Championship and World Cup qualifying campaigns, Zig and Zag’s Amoan Grumpy and Johnny Styles afterwards were essential viewing.