Northern Ireland has changed dramatically in the former, but is poor at the latter. The very failure to address societal healing encourages the occasional eruption of the same old violent incidents that marked the past, to convince most people that little has changed. The key to future progress therefore is to shift focus toward the social peace process and to understand its dynamics. 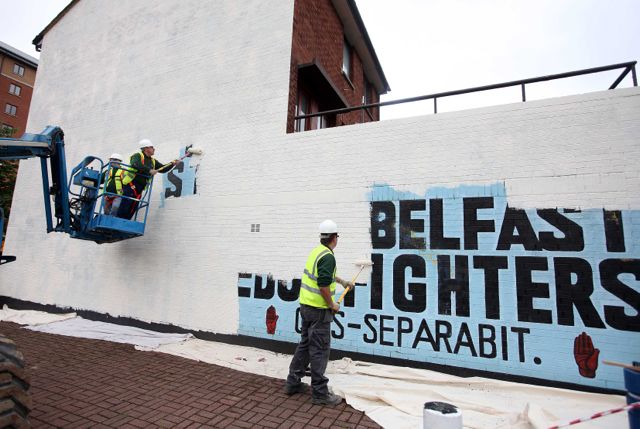 Workmen pictured painting over an Ulster Freedom Fighters mural on Belfast’s Sandy Row. The masked gun man mural with the words ‘You are now entering loyalist Sandy Row’ has been replaced by a painting of King William.

Political actors negotiated the settlements, they occupied the new governance structures and oversaw the new institutions, and they either endorsed or collapsed them, making political decisions about whether to abrogate or stick with it. 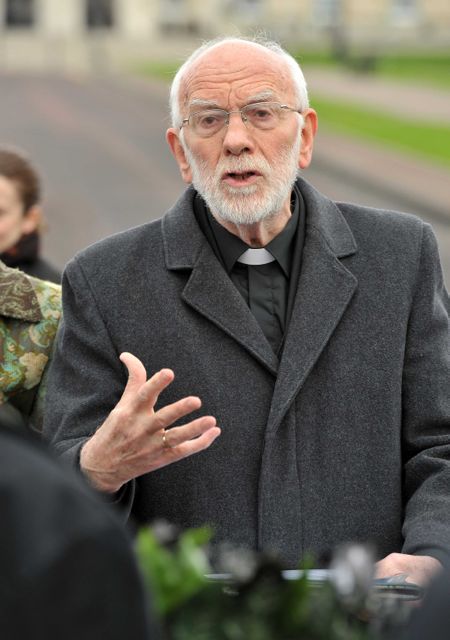 Religious actors are not politicians, peasant leaders mostly do not want to build constitutions, or members of women’s groups rule the country. Yet within spheres of competence, members of civil society groups can become effective peace agents as practitioners within the grassroots.

Recognition of peacemaking as a practitioner activity has spurred the growth of civil society in post-conflict societies as well as given impetus to the emergence of an industry in training manuals, training workshops, peace studies courses and summer schemes, and direct public engagement through forms of civic or peace education.

This industry is not to be undermined, for some of the main weaknesses post-conflict societies face lie with the feelings of disempowerment in the grassroots arising from the view that the peace process is the politicians’ responsibility not theirs. This means that civil society groups play a significant role in trying to persuade people to feel they can make a difference in the social peace process.

If these two forms of peace process engage different sorts of actors, they also operate on different time frames. Governance structures and institutions can be quickly devised and implemented. Statebuilding in the political peace process can advance quickly, if not necessarily always successfully.

Foreign aid money can bolster weak economies rapidly, so long as it is sustained, and new systems of voting can result quickly in fairer elections. This compressed time frame is partly the reason why peace processes can be wrongly perceived to have reached their conclusion when the new institutions are up and running.

There is, of course, acceptance that new governance structures take time to institutionalise and become embedded but this is seen as just a matter of time. Institutions carry their own institutionalisation in time. Social reconciliation, however, has to operate on a much longer time frame.

This is sometimes a source of great frustration as outsiders – as well as some insiders – in the global publics as well as international politicians get exasperated when ancient conflicts erupt at flashpoints or when people in societies emerging from conflict seem not to have learned the lessons of the past, such as Northern Ireland. 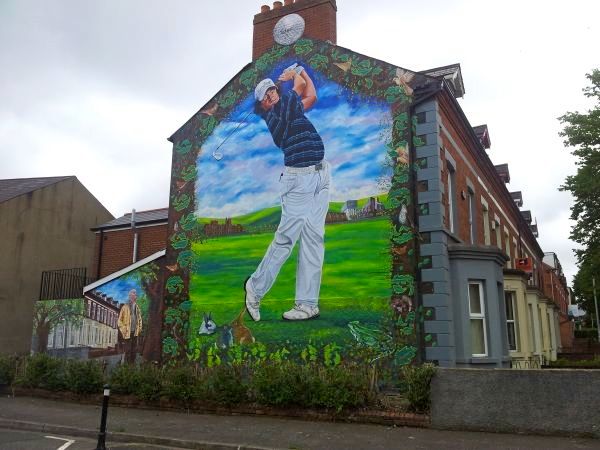 A mural of Rory McIlroy on the streets of Belfast – Is this an example of the changing face of Belfast?

The social peace process, however, is of long duration. Some changes to cultural and national symbols can be quickly implemented – changes to flags and national anthems need little time – but shifts in culture, identity, socialisation patterns, gender relations and the rest take generations.

This is one of the reasons why institutional reform in the political peace process can be seen to be progressing well while interpersonal antagonisms and group conflicts continue, and societal reconciliation seem as far away as ever. Think of Northern Ireland again.

Two things follow from these temporal considerations. Social peace processes require patience. They also demand sustained attention. If trust is a casualty of war, patience is of peace. Time frames of expectation are very short as people want peace on their terms and want it now.

But forgiveness, truth, reintegration, and healing are for the long term, and patience is required because reconciliation proceeds slowly, stumblingly and sometimes falters. The contradiction is clear. On the one hand the social peace process poses people challenges that make it difficult to embrace former enemies, while conversely, people get frustrated and exasperated when old resentments and divisions resurface. This is the paradox of social peace processes. They have within them an inherent contradiction provoked entirely by the problem of expectations.

There are two dimensions to the problem of expectations. Most people want societal healing but without themselves having to change. ‘The other’ has to make the compromises; it is ‘them’ not ‘us’ who have to reform. Most people expect accommodation in others, not themselves; they do not consider they have to move an inch.

The second dimension to the problem of expectations is that most people want the benefits of peace to accrue to themselves and their group not to ‘the other’. They do not want to see former enemies benefitting; if it seems that they are being rewarded, their commitment to the social peace process weakens in the view that it is one sided.

This aptly describes the situation of what peace currently means in Northern Ireland. The future therefore depends on the policy emphasis shifting from political peace process to the social peace process and for people to begin to see that it not the politicians’ responsibility to deliver us the future we all want but ours ourselves.

The social peace process is in everyone’s hands to deliver, not with politicians.