You are at:Home»News & Current Affairs»“Democracy does not have to be a blood sport” – Tell our politicians that Bill!
Social share: 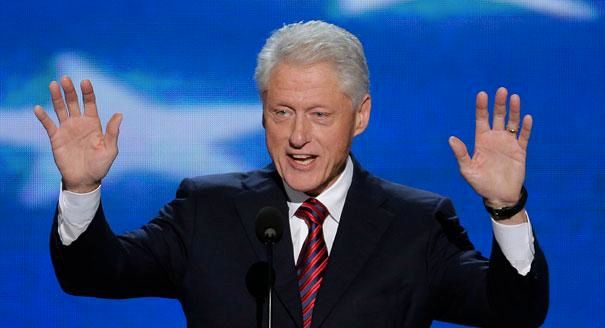 Bill Clinton during his DNC speech to nominate Barack Obama for a second term.

“I condemn the decisions of the Parades Commission but when those decisions are taken then that becomes the legal requirement.” First Minister Peter Robinson speaking in Enniskillen on Tuesday.

This is leadership. We had the protestant churches standing up to be counted too. What a pity that Nigel Dodds MP and Minister Nelson McCausland hadn’t the courage to speak so unequivocally, choosing instead to talk out of both sides of their mouths about the violence in North Belfast.

Flashes of leadership are not enough. Far too rarely do we find here in Northern Ireland politicians who are willing to break the mould, to break rank.

I listened to Bill Clinton today, and I am not holding him up as a paragon of virtue, but in his address to the National Democratic Convention he said “democracy does not have to be a blood sport. It can be an honourable enterprise that advances the public interests.

“When times are tough, constant conflict may be good politics but in the real world, cooperation works better. After all, nobody’s right all the time, and a broken clock is right twice a day. All of us are destined to live our lives between those two extremes.”

We are all under pressure right now in Northern Ireland. The economy is killing us. Young couples are up to their oxsters in mortgage debt with thousands of husbands and fathers finding themselves in England or abroad in search of work. If ever there was a time for us hanging together, this is it. What are we witnessing on our screens nightly – satellite republican groups marching – marching for what at the same time as loyalists are taking  to the streets alleging their culture is being endangered.

Just like Peter Robinson The Sovereign Grand Master of the Royal Black Institution Millar Farr has shown some leadership in an open letter to Father Michael Sheehan of  St Patrick’s Catholic Church in Belfast in which he apologises for any “offence caused to clergy and parishioners” arising out of a band halting outside the chapel on August 25 and playing music deemed unacceptable.

I often wonder do protestants and Orangemen realise how angry people like me get over the petrol bombing and attacks on Orange halls. These demean us all. These attacks are deeply sectarian and are designed to offend. The late Cardinal Tomás O’Fiaich arguing why he felt the IRA’s campaign of violence was wrong once told me:

“Just imagine you and  me are living under the same roof and every week-end you go out and get drunk. You come home and you break my windows and offend me. You will not be at my Christmas party.” He argued abusing and killing our protestant neighbours would not unite or heal communities and would prove counterproductive.

Presume for a moment that all the Parade Commission’s decisions can be shown to be pro republican and offensive to Loyalism and Protestants, does that justify certain people in those communities bringing elements out onto the streets to risk trouble like we have seen in recent nights, putting the police whom  we are all meant to support in danger?

Parading may well be embedded in the DNA of the Protestant community but when that parading takes place where it offends, is that any different to Cardinal O’Fiaich’s thesis about the fault line in the IRA’s campaign of violence so often visited upon members of the protestant unionist community?

Aren’t the Orders propagating division just as those satellite republican groups who appear to gratuitously create reasons for parades and marches? Why don’t the two sides flip the coin and discover just how much support there would be for worthy causes rooted in their respective communities?