You are at:Home»News & Current Affairs»Opinion»Rory ‘the real show’
Social share: 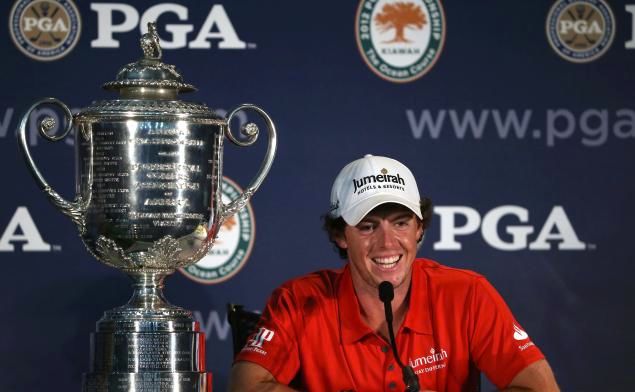 They call it the Greatest Show on Earth.

And for 16 days, from the moment Bradley Wiggins sounded a giant bell in the Olympic Stadium to Lithuania’s Laura Asadauskaite’s victory in the Modern Pentathlon, it was.

In my life, I can’t recall an Olympic Games which has had the same impact London 2012 has had on people in this part of the world.

Whether it was the exploits of the rowers in Eton Dorney, Michael Phelps’ last hurrah in the Aquatics Centre, the women boxers in the ExCel Arena or the triple gold medal winning antics of Usain Bolt, it was hard to peel people away from the BBC and RTE’s TV coverage – even if Gary Lineker and Bill O’Herlihy occasionally did their best.

So why was the Closing Ceremony such a crashing disappointment?

Remember Lionel Ritchie’s nine minute version of ‘All Night Long’ at the end of the 1984 Los Angeles Games? No? Neither do I.

Remember Jimmy Barnes, INXS, Midnight Oil and Kylie in Sydney 2000? No. Afraid not.

What about the Athens 2004 or Beijing 2008 Closing Ceremonies? Nope.

Nevertheless, hopes for the Closing Ceremony in London were high after Danny Boyle’s thrilling Opening Ceremony.

In the build-up to the Games’ final rite of passage, BBC newscaster Huw Edwards quoted one insider as saying if Boyle’s ceremony was the wedding, then this was the wedding reception.

Well, if I were they, I’d go back to the caterer and ask why so much of what we were fed was stale.

As the Closing Ceremony got underway with the chimes of Big Ben and Timothy Spall doing his best Winston Churchill impersonation, it all seemed to be going well.

But then, any hope of a coherent narrative or thrilling spectacle soon went out the window with a performance on the back of a truck by Madness – an even duller re-run of their Jubilee perfomance on top of Buckingham Palace.

Unlike Boyle’s Opening Ceremony, there was no standout moment in Kim Gavin and Stephen Daldry’s glitzy Closing Ceremony. No daring risks were taken. And disappointingly, there was very little humour in a country which has always had a strong tradition of comedy.

Instead we were subjected to what can only be described as The ‘X Factor’ Magnified – a celebration of mostly rather mediocre music talent, occasionally butchering decent songs by much better acts.

And so, we had the massively overrated Jessie J perched on the back of a Rolls Royce screeching her hit ‘It’s All About the Money’ and later destroying Bee Gees and Queen classics.

We had Ricky Wilson from the Kaiser Chiefs on a Moped pretending to be a Mod.

Rather predictably we had Brian May and his wailing guitar. Sigh….

Boyband of the moment, One Direction jumping up and down. Ho Hum….

Russell Brand doing a version of ‘I Am The Walrus’. Bonkers.….

Eric Idle singing (yet again) ‘Always Look on the Bright Side of Life’? Yawn…

And as for The Spice Girls, I thought the taxis came for them a long time ago….

Just like Danny Boyle’s opening ceremony, you brought your own prejudices to the party. And if your sort of thing is a blingy ceremony which seems like Simon Cowell’s ultimate wet dream, then good luck to you. You probably enjoyed it.

And so, when I look back on London 2012, it will be the real girl power of Jessica Ennis, Nicola Adams, Katie Taylor, Rebecca Adlington and Annalise Murphy that will linger long in my memory and not Posh, Scary, Baby, Ginger and Sporty painfully labouring through their dull and repetitive hit, ‘Wannabe’.

Nor will the image of Naomi Campbell and Kate Moss sashaying around the Olympic Stadium endure.

Four images from the 16 days will instead be etched in my mind.

The sheer exhaustion and tears of Coleraine’s Alan Campbell after capturing bronze in the 200 metres men’s individual sculls.

Irish boxer Katie Taylor’s humble gesture to Heaven after learning she had won the gold medal against Russia’s Sofya Ochigava in the Women’s Lightweight boxing final.

And Mo Farah’s sensational 10,000 metres victory on a day when there was an avalanche of Team GBNI medals.

The real success of London 2012 will be how many future sports stars it inspires and for those of us not athletically inclined, how many more are inspired to pursue a more active, healthy lifestyle.

So, thank God for the medal winners and also rans of the Olympic Games for reminding us of the talent, hard work and preparation that goes into reaching the world’s greatest sporting stage.

And thank God too for Rory McIlroy at Kiawah Island for providing us with an escape route from the vacuous celebration of celebrity that was the Closing Ceremony.

With a masterly display of golf, he reminded those of us who have revelled in 16 days of Olympic glory that it’s all about sporting prowess, ambition and determination and not about the “money, money, money”.

Social share:
Previous ArticleTwo weeks on Mars – My Olympics postscript
Next Article Bigots in victory too. How pathetic are we?