You are at:Home»News & Current Affairs»Opinion»Olympics and Aleppo – life and death
Social share: 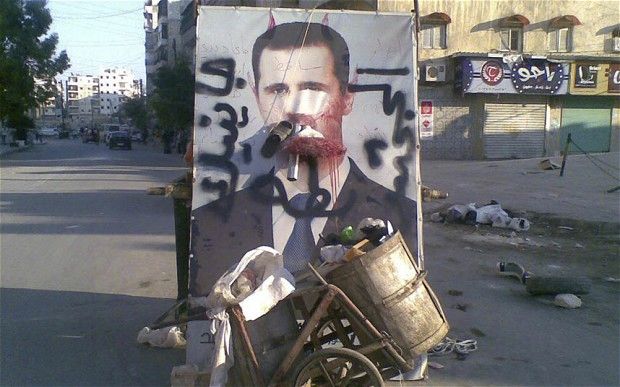 A defaced poster of Syria’s President Bashar al-Assad is seen near rubbish containers in Aleppo. Image courtesy of REUTERS

In the late eighties I ended up in Damascus, Syria, foolishly believing east Belfast man Brian Keenan kidnapped in Beirut where he was teaching English, was going to be released.

On the morning of 11 April 1986 Keenan was seized by Islamic Jihad. After spending two months in isolation, he was moved to a cell shared with ITN journalist John McCarthy.

Eventually Brian Keenan was released from captivity to Syrian military forces on 24 August 1990 and was driven to Damascus.

I was long gone from that ancient city by the time Keenan was released. Damascus was a city to which I have no desire to return.

The current Syrian leader’s father, President Hafez Al Assad was in charge in those days, a much feared leader whose police and secret service seemed to be everywhere.

That was a city where one did what what one was told and no questions were asked. The intensity of the heat of the city only served to compound the tension I experienced as a visitor to Damascus.

I felt I couldn’t breathe because the political environment was so oppressive. From the moment of my arrival in Damascus I  literally had to ask permission to look right or left.

I had a government ‘minder’ spook on my tail all the time who was totally loyal to the State. The sense of suffocation is unforgettable.

I would like to say I gained an insight into the good people of Damascus and Syria but alas I can’t. It was simply a question of keeping one’s wits about oneself to survive.

It taught me one fundamental truth – to cherish democracy, warts and all.

It is ironic that even though Ethiopia had a correspondingly ruthless régime when I was there in pre Band Aid days in 1984, I didn’t feel as corralled or oppressed under the constant gaze of dictator Mengistu. He stared down at us from huge posters round ever corner I turned in Addis Ababa.

Today Bashar Al Assad’s forces are pounding those same streets I walked in Damascus. Many of the people I saw or met may well have been wiped out by the totalitarian leader’s ruthless forces.

Every night the name Aleppo rings out from Syria. Bombs are raining down on that ancient city. Rebels opposed to Assad are seeking to repel his loyalists and yet few of us know very little about Aleppo.

The city of Aleppo is located in northwestern Syria, 310 kilometres (193 miles) from Damascus. It has a population of 2000,000 and was Greater Syria’s largest city and the Ottoman Empire’s third, after İstanbul and Cairo.

It is one of the oldest continuously inhabited cities in the world; it has been inhabited since perhaps as early as the 6th millennium BC.

Excavations at Tell as-Sawda and Tell al-Ansari, just south of the old city of Aleppo, show that the area was occupied since at least the latter part of the 3rd millennium BC.

This is also when Aleppo is first mentioned in cuneiform tablets unearthed in Ebla and Mesopotamia, in which it is noted for its commercial and military proficiency.

Such a long history is probably due to it being a strategic trading point midway between the Mediterranean Sea and Mesopotamia.

The city’s significance in history has been its location at the end of the Silk Road, which passed through central Asia and Mesopotamia.

When the Suez Canal was inaugurated in 1869, trade was diverted to sea and Aleppo began its slow decline.

At the fall of the Ottoman Empire after World War I, Aleppo ceded its northern hinterland to modern Turkey, as well as the important railway connecting it to Mosul.

Then in the 1940s it lost its main access to the sea, Antioch and Alexandretta (Iskenderun), also to Turkey.

Finally, the isolation of Syria in the past few decades further exacerbated the situation, although perhaps it is this very decline that has helped to preserve the old city of Aleppo, its mediaeval architecture and traditional heritage.

Aleppo was experiencing a noticeable revival and was returning to the spotlight. It won the title of the “Islamic Capital of Culture 2006”, and has also witnessed a wave of successful restorations of its historic landmarks.

Today Aleppo is being brought to its knees in nightly and daily State bombardments, with life and death meeting beneath the rubble.

A fortnight ago we saw horrific images attributed to the rebels, of human beings, loyal to Assad, being brutalised to the roars of cheering crowds.

Pan the camera back to London 2012 and tears of joy and ecstasy are flowing freely to celebrate the achievements of the human spirit in a bloodless competition – yes but why has the world no referee?

A £500,000 handout by the British government to Syrian rebels is unlikely to be a solution.

Social share:
Previous ArticleAre you a bigot?
Next Article Two weeks on Mars – My Olympics postscript