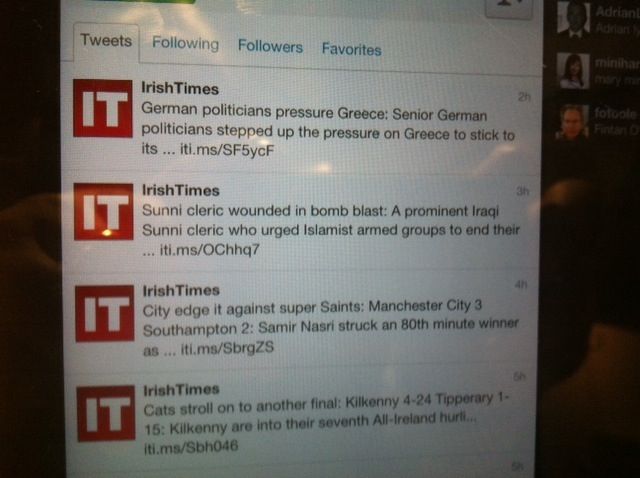 Is this ‘online graffiti?’

I make no apology for being one of the first journalists, if not the first to espouse Twitter as a method of disseminating news and information in Northern Ireland.

I continue to apply the same professional standards to what I post on Twitter and write on my website eamonnmallie.com that I apply in my output on radio, television and in the written word over thirty years.

Stephen Collins of the Irish Times in his Saturday column (18.08.12) launched a blistering attack on Twitter and Social Media.

I wouldn’t have to be too imaginative to direct a corresponding hysterical onslaught against the traditional media.

Leveson was not brought into being as a result of abuses on Twitter. Neither were the many enquiries recently undertaken in RTE primarily fired by Twitter editorial blemishes (mindful however of the Frontline Twitter controversy during the presidential election campaign).

I should point out I am a huge admirer of both RTE output and the Irish Times as organs involved in the distribution of news and information.

‘Let him who is without sin cast the first stone.’ The purpose of this article is not to point the finger of blame but to bring some balance to what Stephen Collins articulated.

There can be no tolerance of ‘fake Twitter accounts,’ or the use of Twitter or Facebook to character assassinate (and have we not seen examples of that directed at senior politicians by politicians within the Irish State)?

How can anyone take seriously the following assertion by Mr Collins: ‘the mainstream media has given an entirely undeserved credibility to such outpourings by paying so much attention to what is essentially online graffiti, whether anonymous or not.’

I get a portion of my living from what Stephen Collins calls ‘online graffiti.’ Quite often a Twitter post by me of 140 characters triggers a BBC/TodayFM/Sky/RTE producer to invite me to appear on radio or television to develop my post.

Why? I am asked to opine or to flesh out what I have reported – because what I write is known to be consistently accurate and reliable whether I convey that in one page or in one sentence.

Is what I write on my Twitter file or on eamonnmallie.com ‘online  graffiti?’

I flatly reject any such implication as a user of either Twitter or online services.

That is not to say users should be free to act recklessly. Policing the newspaper industry seems even more urgent against our recent experiences.

The same standards apply and should be upheld regardless of the media vehicle.

One final thought Stephen Collins. Do you view the above Irish Times Twitter postings as ‘online graffiti?’

Social share:
Previous ArticleDid you slam the door in Mitt Romney’s face?
Next Article Bronte homeland in South Down gets first wind turbine without a cheep