You are at:Home»News & Current Affairs»Opinion»Bronte homeland in South Down gets first wind turbine without a cheep
Social share: 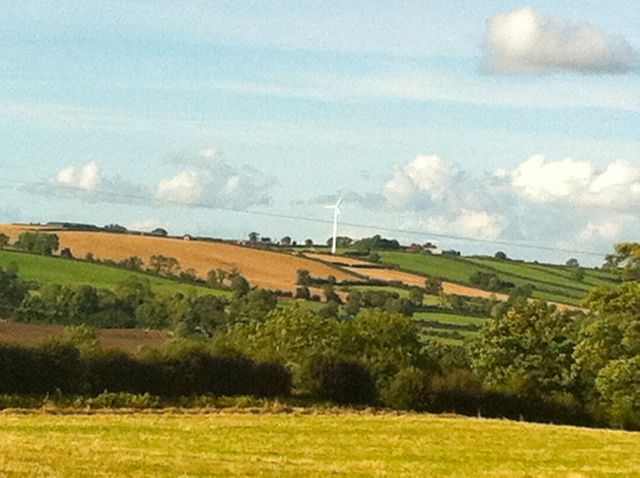 Bronte country in Rathfriland in South Down in Northern Ireland. Image courtesy of MLA John McCallister

Locals argue that turbines said to be twice the height of Nelson’s Column could tower over Bronte country in North Yorkshire if new plans are given the green light.

These plans to escalate the height and number of wind farms and turbines in Bronte country in North Yorkshire decided for me to establish if this new energy phenomenon had impacted on Bronte country in Rathfriland in South Down in Northern Ireland.

It was near there in 1777  that Patrick Brontë, father of  Maria, Elizabeth, Charlotte (“Jane Eyre”), Branwell, Emily (“Wuthering Heights”) and Anne (“Agnes Grey”) was born.

Patrick Bronte preached at Drumballyroney Church (deconsecrated 1976) and taught in the local school in Glascar beside Glascar Presbyterian Church in South Down.

The first 100kW turbine to spear the local Bronte landscape was installed at a farm in the townland of Ballynaskeagh this summer without one voice in protest being raised.

The significance of this is the fact that the new spectacle on the horizon is the first presence, one and a half miles away as the crow flies, one spots on emerging from Glascar Presbyterian Church and the school,  where Patrick Bronte taught.

The docile compliance of the country folk, who once elected Enoch Powell in South Down is in marked contrast to the angry voices in North Yorkshire over the growing intrusion of wind farms in Bronte country there.

Residents of Brontë Country’s picturesque villages were dismayed when the 48m (157ft) tall turbines were granted planning permission in 1993.

Campaigners who fought the low key turbines in the first place say their impact will be insignificant compared to the proposed replacement turbines which are two and half times taller.

“In my opinion, the smaller turbines already there are damaging enough.

“But in comparison with the proposed new ones they are insignificant.

“These new ones will be huge and monstrous.

“It’s devastating. They will change and scar the landscape of this very special moorland place in a way that will be abhorrent.

“They will cause massive damage all along the skyline and be even worse than the Banks Renewable Energy scheme.

“Five hundred years from now people will still be reading the Brontë novels which are as ever-lasting as Shakespeare.

“But will people still come to Haworth?”

Social share:
Previous ArticleIs The Irish Times guilty of posting ‘online graffiti?’
Next Article How much legroom do you need?