We woke up this morning to the news that former SDLP leader John Hume is being decorated by Pope Benedict in recognition of his contribution to human rights and peace.

The Nobel Prize winner is being made ‘Knight Commander of St Gregory.’

Michael Kelly of the Irish Catholic newspaper is reported as saying “this is a very prestigious honour from the Vatican. This is a senior knighthood – It is not conferred lightly at all.”

For what does this honour stand and is it relevant?

The Order of St Gregory (Ordine di San Gregorio Magno) has its roots in the nineteenth century having been established in 1831 by Pope Gregory XVI. It is one of five orders of Knighthood  of the ‘Holy See.’

The inaugural brief reads as follows: that “gentlemen of proven loyalty to the Holy See who, by reason of their nobility of birth and the renown of their deeds or the degree of their munificence, are deemed worthy to be honoured by a public expression of esteem on the part of the Holy See”.

The end of the brief states: ‘that recipients must progressively maintain, by continued meritorious deed, the reputation and trust they had already inspired, and prove themselves worthy of the honour that had been conferred on them, by unswerving fidelity to God and to the sovereign Pontiff.’

An eight-pointed cross, the insignia of the Order, bears a representation of St. Gregory on the obverse and on the reverse with a motto which reads “Pro Deo et Principe” (For God and Prince).

No historian, observer or resident of Northern Ireland would question the unswerving commitment of John Hume to human and civil rights for all. 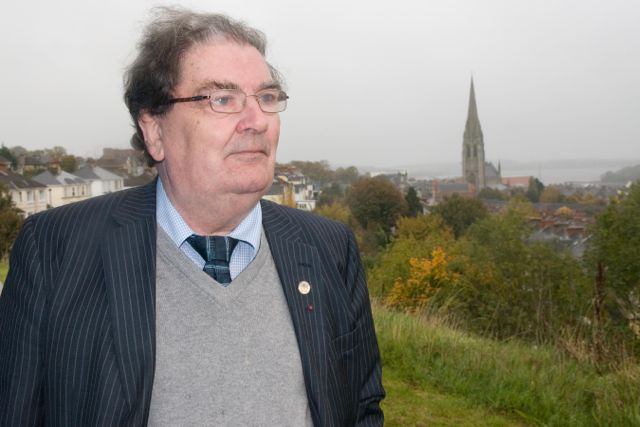 Hume singularly didn’t parade catholicism, choosing to take his cue on civil rights from American and European figures. In fact he took his cue, in his early days from US black civil rights leader Dr Martin Luther King.

There is a very strong argument for John Hume to have nothing to do with this honour being bestowed on him by Pope Benedict. Firstly, he doesn’t need it, being one of the most decorated politicians in the Western World.

Secondly, why lend credence to the tenure of the current pope against the backdrop of the  Catholic Church’s abdication and abandonment of the most vulnerable in society – children?

Pope Benedict, if I wanted to be kind to him, to say the least, has been dilatory in cleaning up the child abuse scandal tearing parishes apart.

Do you think even a cursory reading of the ‘brief’ attached to the raison d’être of the honour on offer to John Hume, is compatible with the example given by the current pope?

For the same reason I question how much affection would be on show for Pope Benedict should he visit Northern Ireland.

John Hume has proven himself a distinguished political thinker who found the language to break the political deadlock in Northern Ireland, a problem which appeared for so long to be intractable.

He carried the hopes and dreams of a community on his shoulders for over three generations and exhausted himself physically and intellectually in doing so. Why accept an honour from an institution which has visited so much hurt on the young and innocent?

When one considers the apparent motive of the catholic church for bestowing a corresponding honour on former News of the World owner Rupert Murdoch alarm bells should begin to ring.

In 1998 Murdoch (a non catholic) was made a Knight Commander of St Gregory. He had apparently been recommended for the honour by Cardinal Roger Mahony, after giving money to a Church education fund.