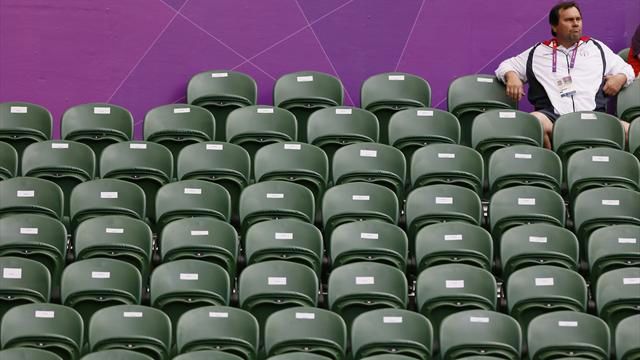 Olympics Games Chief Sebastian Coe is in a no win situation telling the media that “the venues are stuffed to the gunwales” because the cameras nightly reveal hundreds of empty seats for many events.

No promoter ever wants to find him or herself in the dilemma in which London 2012 Chief Sebastian Coe finds himself.

The real world is that promoters hit these snags regularly in a lifetime and have to live with these setbacks.

You may ask but why – because ‘promoting’ whether one is talking of concerts, speaking engagements, sports events whatever, is another form of gambling and it is nothing more or nothing less.

The promoter is at the mercy of a fickle public. A shower of rain, a missed train, a bad day at the office, a row with a girlfriend or boyfriend could change the mood, the appetite for attending a football match, a concert or any event.

One of the ‘in house’ terms in show business is ‘papering seats.’ Presume for a moment a promoter and the manager of an act like Madonna agree that they will sell 40000 tickets and they only sell 25000. Inevitably the venue will look half empty.

The question then arises, what does the promoter do to minimise the potential damage to Madonna’s image or to the image of someone like Bruce Springsteen, Paul Simon or whoever?

The choices are limited. The act charging high end prices for tickets for the concert in hand has to protect the sales of future concerts and therefore might want to guard against a promoter ‘papering’ or giving away free tickets to pack the venue to create the impression that the show is a sell out.

There is also the possibility too of reconfiguring the interior of the venue if that is possible to give the impression of a full house but that is not always doable.

‘Papering’ according to one show business source might involve giving tickets to a number of Sixth Form classes or to a society or organisation to lure people into a venue to ‘take the bad look off the place’ during a concert or event.

The problem with the Olympics is amplified dramatically with so much of what is going on going out live on television – as Colombian singer Shakira says “listen, my hips don’t lie.”

Of course everyone would love to be in London for the opening and closing ceremonies but do I want to see the javelin competition or some esoteric sporting event if I am handed  a free ticket? Forget it.

I only want a ticket to see what I want to see. That shower of rain, having to wait too long for a bus or a cross word with my wife might decide for me to forget about the hassle of making my way to sit through a non event as far as I am concerned in a half empty arena.

Do you get my drift? Not even a free ticket will necessarily lure me into the Olympics venues.

This business of ticket sales is a nightmare from a promoter’s point of view. Will the tickets sell or won’t they? Why are they not selling? Are they too dear? Has the mood or taste moved on? Has the wrong signal been emitted about the performance of the artist on the current tour? Is he or she playing only music and songs from the latest studio recording?

All of these are factors according to insiders in the promotion business.

Without giving undue attention to the Olympics when I read several times in the press that the only tickets ‘left’ were £1,200 etc. I immediately lost interest not that the Olympics were on my itinerary this summer.

The wrong message factual or fictional, was conveyed to paint a negative picture. I am one of those fickle concert goers.

So what does Sebastian Coe do at this stage faced with endless stories about empty seats?

It is hard to say. A tsunami of GB gold would shift the focus very quickly. Is that going to happen?

No one knows. He needs a break. Is this a unique experience to the London Olympics?

I doubt if it is but it is a pain in the neck for the organisers.

Those under-water cameras in the swimming pool lead us to believe we are there.

Social share:
Previous ArticleDissent – The Dissidents – and the need for Dialogue
Next Article Wheelchair Rugby – getting it over the line