You are at:Home»News & Current Affairs»Claudy “an explosion too loud for your eardrums to bear”
Social share: 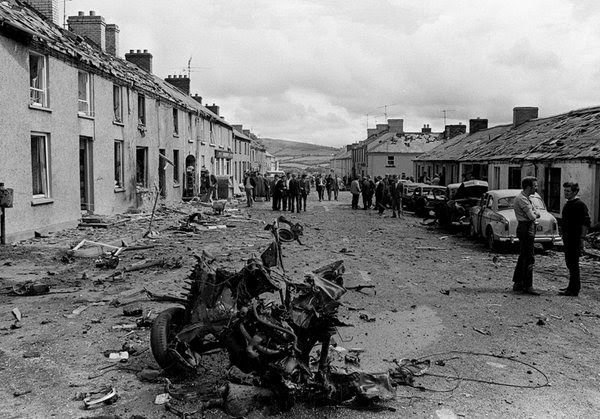 On this day on July 31st 1972 nine people lost their lives in a bomb attack on the village of Claudy in Co. Derry.

No one captured the ordinariness and extra ordinariness of life and death in that village that morning than the late poet James Simmons, who composed the the following lyrics:

The Sperrins surround it, the Faughan flows by,

at each end of Main Street the hills and the sky,

the small town of Claudy at ease in the sun,

last July in the morning, a new day begun,

How peaceful and pretty if the moment could stop,

McElhinney is straightening things in his shop,

and his wife is outside serving petrol, and then

a girl takesa cloth to a big window pane.

And McCloskey is taking the weight off his feet,

and McClelland and Miller are sweeping the street,

and delivering milk to the Beaufort Hotel,

And Mrs McLaughlin is scrubbing her floor,

and Artie Hone’s crossing the street to a door,

and Mrs Brown looking around for her cat,

goes off up an entry – what’s strange about that?

Not much – but before she comes back to the road,

That strange car parked outside her house will explode,

and all of the people I’ve mentioned outside

will be waiting to die.

An explosion too loud for your eardrums to bear,

and young children squealing like pigs in the square,

and all faces chalk white and streaked with bright red,

and the glass and the dust and the terrible dead.

of a man’s hanging open, and still he’s not dead.

He is screaming for mercy, and his son stands and stares

and stares, and then suddenly disappears,

and Mrs McLaughlin is pierced through the head.

Meanwhile to Dungiven the killers have gone,

and they’re finding it hard to get through on the phone.

Social share:
Previous ArticleWould Susan Boyle have been better suited than Danny Boyle?
Next Article The killing ‘trophy’ – the SAS – and the battles for Truth