You are at:Home»News & Current Affairs»Opinion»Ken Maginnis has found no friend in the thinking Dr. David Maley on his homosexuality remarks
Social share: 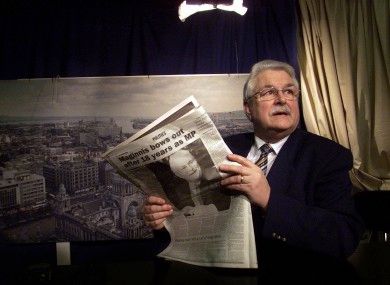 I think it’s still a commonly-held view here that Northern Ireland is 30 years behind the times in many things. However, the Iron Age attitude displayed by Ken Maginnis regarding same-sex marriage last week suggests that anyone who thinks we’re only three decades off the pace is over-optimistic.

Usually when a politician makes an outrageous statement, they are simply echoing the outrageous views of the constituents they hope will vote for them. But since Ken is well past trying to win votes, we have to assume that what he said is what he really thinks. He’s entitled to his opinion, but given that he’s still a vote-casting member of the Upper House of a real Parliament, his views are scary to say the least.

But then so are many of the other views of the Religious Right. I’ll certainly uphold their right to freedom of religious belief, but only as far as it does not impinge on someone else’s rights and freedom. At that point, the arbiter is the collective reason and conscience of all of us, not some notion someone has in their head that they think is God. When the President of the world’s foremost military power believes God has told him to go to war with Iraq, it’s time for a sanity check.

For therein lies the crux of the matter – where do you start with someone who thinks that God has revealed the truth to them? Well, I guess you begin by pointing out that such an attitude lies on a spectrum, at the far end of which is the view that “God has predestined nonbelievers for hell, so I’m doing His will by hastening their arrival there with this bomb”. But in the mind of a fundamentalist, such concerns only apply to other fundamentalists, since other fundamentalists don’t have the real truth. Having the real truth justifies anything.

So next you might try an appeal to humility: after all, humility is a so-called “Christian” virtue. (For me humility is just an admirable virtue, and not something than Christianity can claim monopoly of – indeed, the opposite seems more often the case). Anyway, one could suggest that to claim that you know the truth is arrogance, no matter how you dress it up. But the fundamentalist response is always ultimately that it is God’s truth, and if God’s truth just happens to coincide with their own view of the world, well that’s called a blessing.

In Northern Ireland, the apparent coincidence of fundamentalist prejudice and that of their God is defended by claiming divine authority for their scriptures: “the bible says it and that’s all there is to it”. I see two immediate problems with this attitude – big problems. The first is the notion of the bible should be our source of moral authority, which I will come to in a moment. The second is the notion that its interpretation is clear – if the latter was the case, there would be no reason for 37,000-and-counting different Christian denominations, all claiming to be uniquely and authentically biblical. In fact, the god you think you see in the Bible/Koran/Book of Mormon/etc is a pretty good indication of who you really are inside – it’s all a matter of interpretation.

Even the Ten Commandments aren’t black and white – or at least, the expedient interpretation isn’t. Do you know any fundamentalist Christians who refuse to take their paid holiday? Believers will insist on strict observance of the Sabbath, but the commandment actually says six days will you labour, and on the seventh you will rest. So if every Sunday is a day of rest, how come the other six days of the week aren’t always for labour? Do fundamentalists all work Saturdays for free?

As for the notion that the bible has ultimate moral authority, I simply don’t understand how anyone who has read it from end to end could actually believe that. It is littered with the writings of people who imagine that God thinks like they do, a God who is as badly-behaved as they are, a God who always takes their side, a God who has no problem with exclusion, demonization, judgmentalism – in short, a God that suits, a God created in the image of man. This is the book that says,

“If a man comes upon a virgin in town, a girl who is engaged to another man, and sleeps with her, take both of them to the town gate and stone them until they die—the girl because she didn’t yell out for help in the town and the man because he raped her, violating the fiancée of his neighbor”. (Deuteronomy 22 v23-29)

If that isn’t sufficient patriarchal prejudice for you, check out the book of Numbers (31:18), where “God’s servant” commands the Israelites to kill all of the “used” Midianite women who have been captured in war, and all of the boy children, but to keep all of the virgin girls for themselves. “Word of God”, or self-serving propaganda of man? You decide.

To my mind, a little honest self-examination would go a long way with some fundamentalists, so much so that the views of some on the Religious Right appear to me to have no basis other than their own prejudice. The majority of these prejudices are to the detriment of females, so it is ironic that the church is an organisation run by men but largely populated by women. The view put forward by Ken Maginnis doesn’t actually suggest women are second-class citizens by divine ordinance, but it is of the same genre – condemn anything that is non-male, non-white, non-affluent, non-hetero, indeed everything your typical fundamentalist thanks God that they’re not.

P.S. just for the record, I’m not gay