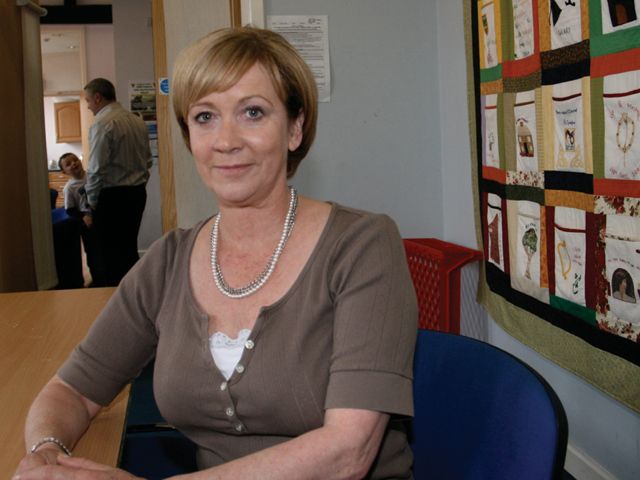 The minute I heard Eibhlin (Evelyn) Glenholmes name and was told she would be part of the new Victims’ and Survivors’ Forum, I knew what the story would be.

Yet, there is a big chunk of our small population who will have no memory of those dramatic events in the mid-80s and that Dublin street play that was part of her extradition battle.

There were nine warrants, which an Irish court deemed defective, nine warrants covering a range of offences, including murder, linked to the IRA campaign in Britain in 1981-82.

Released by that court in Dublin, Glenholmes disappeared – melted away into a life on-the-run.

She has not been, and is not, a public stage republican.

Her return to Belfast was in the peace process years, and after Sinn Fein had asked the Northern Ireland Office for information.

They wanted to know if the woman once labelled Britain’s “most wanted” was still being sought.

The answer came from the Prosecution Service – in information that said there was no longer a realistic prospect of achieving a conviction.

It meant Eibhlin Glenholmes was free to return to a city where her early years were spent in the Short Strand – that small nationalist community that has been surrounded and hemmed in during the decades of war and peace.

Just last year it was the target of an orchestrated UVF attack.

Eibhlin Glenholmes has no convictions, but there are those who will always define her in the war story and information contained in those warrants issued almost thirty years ago – warrants that linked her to the IRA.

A couple of months ago I interviewed Ms Glenholmes about the IRA – and about a challenge to republicans as part of a reconciliation initiative to say sorry, not as an apology for the war, but to acknowledge the hurt caused by all armed actions.

She was very clear in her responses.

On the question of hurt, she said: “I have no qualms about apologising for any hurt.

“I regret that the conditions existed in which my life and the lives of many people of my generation were changed irrevocably by the armed struggle,” she continued.

“And I regret that so many of our lives were lost.”

She was equally clear on the question of the IRA war – which, in her opinion, was not wrong.

“Absolutely not,” she told me.

However much people may dispute that assessment and disagree, it is what Eibhlin Glenholmes believes.

It is her ‘truth’ and something she is prepared to express.

That is what this discussion and continuing debate on the unfinished business of the peace process needs – the perspectives of all sides.

The decision to appoint Eibhlin Glenholmes to the Victims’ Forum, as one of 25 unpaid members stretching out across a wide range of people and backgrounds, cannot and should not be judged on unionist political reaction.

Those responses could have been written before the words were spoken.

They were entirely predictable.

There is a decision for us all.

Do we, in addressing the experiences of the past, close our ears to those we don’t want to hear; close doors to shut out the words and perspectives that don’t fit with ours?

What a disaster that would be. What a shambles. What a cop out.

The Victims’ Commissioners were right to invite Eibhlin Glenholmes to sit on this Forum.

She has a war experience and story to tell that is one of the jigsaw pieces in the overall picture.

If ever we move beyond this Forum into some “truth” or information process, then every voice should be heard – republican, loyalist, security forces, intelligence services, political, governments, churches, media and many more.

A few hours before I started writing this piece, I was chatting to a loyalist; a loyalist who told me that politicians should not be allowed anywhere near the past.

What he meant was they should not be allowed to design the structure, shape and restrict or curtail any process – decide who’s in and who’s out.

He told me, he believes, the people are ahead of the politicians; that others are better placed to build the model, and get us to a point where we are dealing with and not dwelling in the war and its consequences.

Let us grow up in our conversations, stop the petty point scoring and predictable reactions, think seriously and work seriously to get things done, and include everyone in the work of writing the narrative of the past.

The biggest challenge in that work is to provide the best help and care to those who need it most, and to make sure we don’t go down those war roads ever again.

Eibhlin Glenholmes story is not just about conflict, it is about peace making and peace building.

In these days after war, let no one decide who gets to sit at the front of the bus and who goes to the back.

Social share:
Previous ArticlePaul Maskey counters the arguments against conflict tourism
Next Article Ken Maginnis has found no friend in the thinking Dr. David Maley on his homosexuality remarks