You are at:Home»News & Current Affairs»Opinion»“They couldn’t bomb unionists out of Northern Ireland…now they want to ‘love’ them out”
Social share: 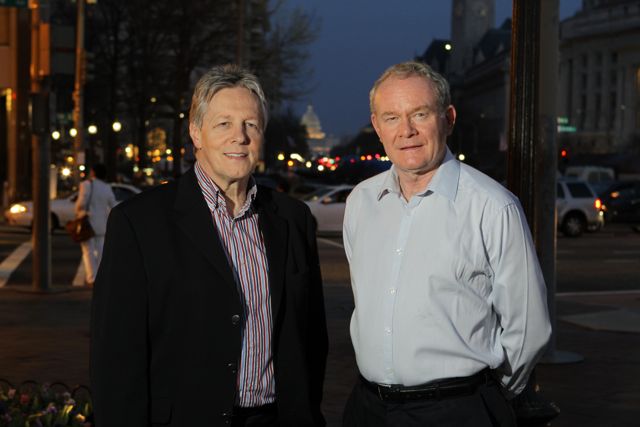 With the recent hoo-ha about ‘reconciliation’ and ‘engagement’ it seems to have been forgotten that unionism has been engaging with republicanism for a very long time. The peace process involved pretty intense interaction—even if some of it was through intermediaries.

The 1998 Agreement was built on unionist/loyalist and republican/nationalist (along with civic) input and in May 2007 the DUP and Sinn Fein concluded a deal which shored up and stabilised the political institutions.

Almost every single day there is unionist/republican engagement and dialogue in the Executive, the Assembly, the Assembly Committees and local councils.

So it does irk me a little (quite a lot, actually) when I hear self appointed ‘representatives’ of the pro-Union community seemingly lecturing the rest of us about the need to engage republicanism.

As I say, party political unionism (which is where you find the MLAs, MPs and councillors—the people with a specific mandate and an electorate to account to!) has been engaging with Sinn Fein for a very considerable period—and has had many ‘difficult conversations.’

Even the deal they did with the DUP in May 2007 was a deal built upon a very cynical, clinical, calibrated carve-up of power and position between two sectarian blocs.

Unsurprisingly the two parties have subsequently been unable to reach understanding on a range of key issues: including a shared future. Everything boils down to a tit-for-tat exchange between them, with absolutely nothing done on the basis that it is ‘the right thing to do’ in the circumstances.

Yet out of the blue—and against a background of being serially incapable of nailing down a shared future strategy in the Executive—Sinn Fein has decided that ‘reconciliation’ is the strap line for the latest stage of their uniting Ireland project.

What is reconciliation, anyway? Broadly speaking I would see it as a coming together or meeting of minds between old enemies and opponents: where they find ways to live together without fear of each other or without threatening each other.

The Belfast Agreement should have been the first part of that process. Yet how could it be when Sinn Fein still refers to both the original Agreement and the St Andrews’ add-ons as mere staging posts?

How could you start a genuine reconciliation process when Sinn Fein seemed content to mark time in the Assembly and Executive, banking on demographic shifts and an assortment of propaganda exercises to propel them out of the United Kingdom and into a united Ireland?

So, rather than concentrating on a unionist/republican reconciliation programme at the heart of the Executive they opted, instead, for the continuation of an us-and-them solution to every socio/economic/cultural/educational problem.

As for the ‘Sorry’ debate! Declan Kearney told Stephen Nolan on Monday 28th that he would say ‘sorry’ if he thought it would be helpful. He then refused three requests from Nolan to say the word.

At what stage would it be helpful to say sorry? Let me give you the very blunt answer: the word sorry will be uttered in exchange for something very specific on Sinn Fein’s agenda. It will be a hollow, vacuous sorry; so nuanced and conditional that it will be utterly, utterly meaningless.

But how do you say sorry for killing or injuring someone while, at the same time, the terrorist group responsible is in back channel negotiations?

No-one should kid themselves: Sinn Fein has thought all of this through from start to finish. What we are seeing now is a well orchestrated propaganda exercise. It fits in with the ‘Unionist Outreach’ project and the ‘Uniting Ireland’ project.

It’s about hand-picking headline grabbers to address recent conferences (think David Latimer); it’s about encouraging dialogue between Sinn Fein and so-called ‘significant figures’ within the pro-Union community (Protestant clergy, loyalist paramilitaries, the usual suspects from the civic and cross-community sector, a smattering of business people and, of course, the voices of some ‘victims’).

For, as Gerry Adams keeps reminding us, all Sinn Fein is doing is trying to ‘persuade’ just ‘a section’ of the pro-Union community!

Those who criticise my cynicism and my reluctance to buy into this latest stage of the Sinn Fein campaign say that they won’t be taking part to give Sinn Fein an easy ride.

What I don’t understand, though, is why they want to get involved at all? What is their mandate? Who do they speak for? What is their end goal? Do they even agree with each other on crucial areas?

I make that observation because I’m aware that Sinn Fein has a mandate for this process, know who they speak for, know what their end goal is and agree with each other on everything.

When all is said and done Sinn Fein is in the business of convincing its’ base that Irish unity is not far away. The campaign never stops. The rhetoric never stops. The latest propaganda wheeze is always just around the corner.

It has been specifically designed so that ‘reasonable’ people can say: “what have we got to lose by getting in and giving it a go”? Better still, it has been designed in such a way that anyone who objects is likely to find himself portrayed as some sort of unreasonable dinosaur who stands in the way of progress.

A point common to all of those who have been named as being involved with the engagement is their view that there is no other way of testing Sinn Fein’s bona fides? But if, as I contend, this is nothing more than a Sinn Fein propaganda exercise, there are no bona fides to be tested.

This is not negotiation—because the non-Sinn Fein participants are not empowered to negotiate anything. Their job is simply to convince the rest of us that Sinn Fein is serious and sincere, because Sinn Fein has decided that they are the ‘sort of people’ it needs to get on board.

Yet the fact remains that these people have no mandate and what they are engaged in is, in effect, a series of private conversations between individuals and a political movement dedicated to the removal of Northern Ireland from the United Kingdom.

The Rev Lesley Carroll suggests that I have a ‘determination’ to be uncomfortable. There is no determination involved. It is simply the triumph of long experience over long dashed hope.

Also, I don’t even understand how you begin a process about reconciliation in which the invitations come from the well practiced justifiers of terrorism as part of their latest propaganda strategy!

I agree with those who say that unionists have ‘nothing to fear’ from this stunt; but nor is there anything to be gained which can be of benefit to all sides. So what’s the point of going?

The Rev Carroll also argues that there ‘need to be people with a political mandate there and if the unionist people haven’t mandated their leadership to get out and tell how it has been for the unionist community then I am not sure what they have been mandated to do.’

Well, why doesn’t she get a political/electoral mandate? Why don’t the pro-Union people who support this sort of very odd engagement get together and get the mandate? Another question: if the unionist parties did get involved, would she then leave it to them?

Reconciliation, for Sinn Fein, seems to be more about unionists and republicans living in an ‘inevitable’ united Ireland than about living together in Northern Ireland as it is today.

It’s also about (and this is why I think it appeals to some elements of Loyalist paramilitarism) putting in place some sort of historical narrative which enables former terrorists to pass off their campaigns as both necessary and justified.

The IRA didn’t achieve one single thing that made Northern Ireland a better place: they simply used terror for their own very personal political ends. And today they are attempting to deploy their reconciliation process for the very same reasons.

Let me get this clear: I am not opposed to either reconciliation or a shared future. But I am very much opposed to the idea that the outcome of either process should be determined by parties or organisations which are still steered by their own self-serving, self-justifying agendas.

My instinct (and I have written about it many times recently) is that reconciliation can only truly begin when Northern Ireland has moved into a post-conflict era, complete with new, post-conflict parties.

The DUP and Sinn Fein have constructed an ongoing, seemingly unbreakable stalemate at the heart of government. By no stretch of the imagination is that reconciliation.

Sinn Fein wants to keep that stalemate in place while, at the same time, developing a form of ‘reconciliation’ which suits their own blood-drenched narrative. But by no stretch of the imagination is that reconciliation, either.

So maybe the best and most useful thing that the likes of the Revs. Good and Carroll, along with Lord Alderdice and others could do, would be to set out the parameters within which a reconciliation process could develop; and then issue their own invitations to a variety of parties, organisations and interest groups.

If nothing else, that sort of process would begin at a level, neutral starting point.

One thing is pretty certain: the Sinn Fein version won’t have a wide enough appeal to make it viable, let alone ultimately successful.  Yes, reconciliation has to begin somewhere—but not with a Sinn Fein strategy penned in Connolly House and published in An Phoblacht!

Social share:
Previous Article‘And I shall have some peace there, for peace comes dropping slow’
Next Article When is mainstream Unionism going to catch up with grassroots Loyalism on reconciliation?