You are at:Home»News & Current Affairs»Opinion»Parity of investment in Belfast – yes or no?
Social share: 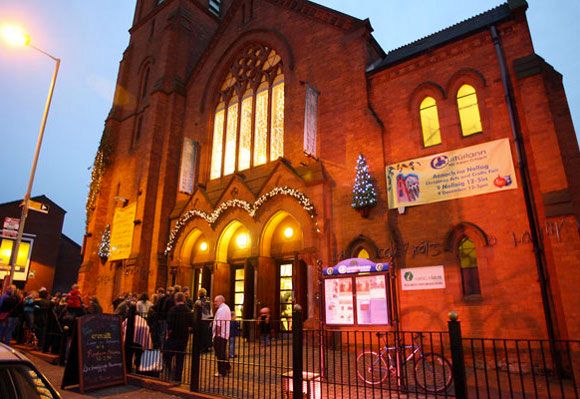 One of the fascinating aspects of Northern Ireland is the way it is a cameo illustration of the French saying, “plus ça change, plus c’est la même chose” (“the more things change, the more they stay the same”). So what really has changed in our Shared Society, and what is simply the result of more spin than the looms of our dearly departed textile industry ever generated?

Life has certainly changed if you are a card-carrying member of the DUP. Once Ian Paisley acknowledged in public that he was talking to both the British Government and to Republicans, little wonder there were some in his party who asked, “who is this man, that sups with tax collectors and Shinners?” (cf Mark 2:16). Fortunately the dissenting voices were quieted by the number of lucrative Situations Vacant that the Good Reverend was able to dangle in front of them. With the exception of the defectors to the Traditional Unionist Veto, the Big Man soon had the brotherhood all singing from the same spreadsheet, and it’s been all-aboard the political gravy tractor ever since. After decades of being opposed to just about everything, they are now the major player in practically the only unopposed democracy on the planet.

If the politics at top level has changed, life at ground level for some has not. The Inescapable Rent Administrator and the Unofficial District Apothecary may have been largely privatised, but you somehow know they haven’t gone away. In areas still blighted by protection rackets and drugs, little has changed and people could understandably confuse paramilitary with parasite.

Somewhere in between, the silent majority of the recycling classes worry about the economic prospects for this peripheral backwater of a fading economic empire (read ‘UK’ or ‘EU’, whichever you prefer). However, contrary to what some commentators suggest, the manufacturing sector in Nor’n Ir’n is far from dead in the water. For example, in recent years, some enterprising citizens have demonstrated laudable innovation by manufacturing an entire language, and wi’oot muckle catter fer Ulster sevendibles frae th’ Yeti at DETI.  Northern Ireland also leads the world in a niche area of recycling – nowhere recycles more tax revenue per capita than here, and those in favour of trading a cut in the block grant for a reduction in corporation tax would do well to bear this in mind (not that those in favour are likely to have the good of Joe Public, and especially Joe Public-Sector, on their radar anyhow).

The economic outlook is good elsewhere too. The DUP, for example, have found sufficient disposable income to have an extension built to their East Belfast HQ: it’s called Titanic Quarter. However, not all quarters of the city are benefitting from Parity of Investment – the landmark new infrastructure development in West Belfast appears to amount to adding a conservatory to Cultúrlann.

On a more serious note, life has changed little for victims of our troubled past – many of whom only wish it would. As always the political inclination will be to take the expedient option – throw some money the way of victims in the hope they will feel sufficiently ingratiated not to ask awkward questions. “We have to let go of the past and move forward” they are told, but it’s not so easy to move forward if you lost your limbs in the conflict, and this should never be forgotten. Too many of our politicians – many of whom are not shy to disport their Christian credentials – scuttle past on the other side of the road when faced with the ongoing needs of victims.

On the subject of our troubled past, a new feature of our Shared Society is the phenomenon of Commissioner Bloat, and the associated sub-phenomenon of Victim’s Commissioner Bloat. In the case of the latter maybe I need to get out more, but I didn’t hear much about what real difference they made – except increasing the drain on the public purse. Given that they weren’t reappointed, we can draw our own conclusions.

But there is one change that is real, and which we should be glad of. British ministers with little or no interest in Northern Ireland (except as a stepping stone to further their political careers) used to fly in here – rubber stamp in hand – to authorise the will of unaccountable civil servants. At least now the paper shufflers have to give an account of themselves in front of the relevant Assembly Committee.

Officials at the Department of Education, for example, have spent nine years – and dear knows how many hundreds of thousands of pounds of taxpayers hard-earned – preparing a report on the future of teacher education. Nine years! Only in the civil service could they get away with it. And so finally last month they presented five A4 pages to the Education Committee. Amongst the distilled insight of 100 months of tireless labour was the claim that initial teacher training here is poor. In the days of Direct Rule, an absentee landlord minister – had they chanced to read it – would not have questioned this conclusion. Fortunately committee members take more interest, even if they are clearly firing bullets manufactured elsewhere. I’m paraphrasing for brevity, but the questions amounted to “Is this the conclusion of your own Inspectorate?” “No”. “Is this what the students on the courses are saying?” “No”.

We should perhaps be thankful that committee members didn’t follow up with what seems to me to be the obvious corollary: “well even if you had evidence rather than anecdote to substantiate your claim, could we have the remotest confidence in the relevance for 2012 of the conclusions of a review that began in 2003?” We would probably have to wait another nine years for the paper shufflers to come back with a reply.

Social share:
Previous ArticleGAA Podcast – ‘To the Point’ (Episode 5)
Next Article McGuinness’s IRA war – how does he tell his story?