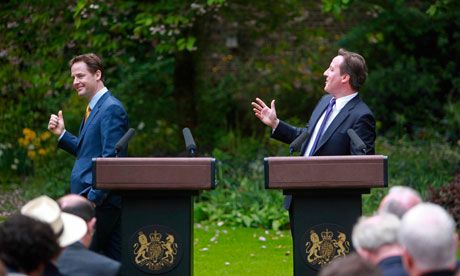 The following is Alex. Kane’s script published in full from tonight’s (10th May 2012) BBCNI Hearts and Minds “If You Ask Me” segment:

Some couples have pre-arranged weddings. Some just meet and fall wonderfully, helplessly, hopelessly, head-over-heels in love. Some have a long courtship. Some live together for a while. But for David Cameron and Nick Clegg it was always a loveless, lifeless, marriage of convenience and mutual survival—the sort of relationship the dung beetle has with the buffalo.

Watching them renew their vows on Tuesday afternoon was a bit like watching two drunks at a drive-thru ‘Chapel of Love’ marriage ceremony in Las Vegas. They didn’t believe a word of their vows and nor did anyone else. Most of us knew that the confetti would barely have hit the floor before this mis-matched couple—more of a foe-alition than a coalition—would  be knee-deep in texts and e-mails from their families begging them to jump on the next available bus and get home again.

It was always going to be a difficult marriage. The Conservatives haven’t won a Parliamentary majority since 1992 and the Liberals haven’t won anything at all since around 1906. So Dave and Nick—both astonished to discover that they weren’t as popular as their magic mirrors had led them to believe—yet both desperate for adulation—turned to the Spice Girls for a solution.

Okay, all together now:

A dream of you and me together.
Say you believe it!
We can achieve it!
Tonight is the night when two become one.”

Hmm! And from such philosophical roots did the coalition emerge. But when your existence stems from a girl band’s back catalogue it can hardly come as any surprise when the voters—as notoriously fickle as teenage pop fans—decide to dump you for the latest ‘cool’ thing. That that ‘cool’ thing turns out to be Ed Milliband only goes to show how monumentally naff and out of touch ‘Posh’ Nick and even ‘Posher’ Dave have become.

The increasingly panicked right-wing of the Conservative Party wants Cameron to dump him and get back to the more traditional pastime of attacking the EU, gay marriage, immigrants, dole scroungers and environmentalists: as well as reintroducing the birch for anyone who doesn’t have a picture of Mrs. Thatcher over their fireplace.

That, of course, isn’t the answer to their problem: for the real problem is that Cameron isn’t actually a Conservative at all—and even if he was, nobody seems to like him all that much anyway!

Even more absurd—Clegg’s critics are telling him to dump Dave and go back to the Liberals’ previous campaigning tactics—tactics which have kept them in third place for over a century!

The Cameron/Clegg adventure was always going to be a five act opera: albeit more soap than substance. If the first two acts—the Rose Garden duet and the electoral night of the long knives—were heavy going, then the next two will be positively Wagnerian, for the success of Hollande in France and of Golden Dawn in Greece may yet result in the collapse of the Euro amidst the caterwauling of an awful lot of fat ladies choosing to sing at exactly the same time!

The UK’s coalition will have enough difficulty sorting out its own internal problems without having to deal with the added, catastrophic chaos of a disintegrated Euro and the shredding of the European Union itself. Also, Cameron and Clegg shouldn’t imagine that strapping themselves to the mast of the raft is going to save either of them from the next tidal wave of disapproval.

The coalition was a mistake from the start—the sort of mistake you would expect from two men who have always been more interested in their own futures than in the legacy and core beliefs of their parties. The problem for the rest of us, however, is that the fate of our country during this ongoing crisis still rests in the shaky hands and dithering responses of the Parliamentary equivalents of Wallace and Gromit.

Social share:
Previous ArticleWell, well, well! My story of wells!
Next Article Is there a morality attaching to conflict tourism in Northern Ireland?