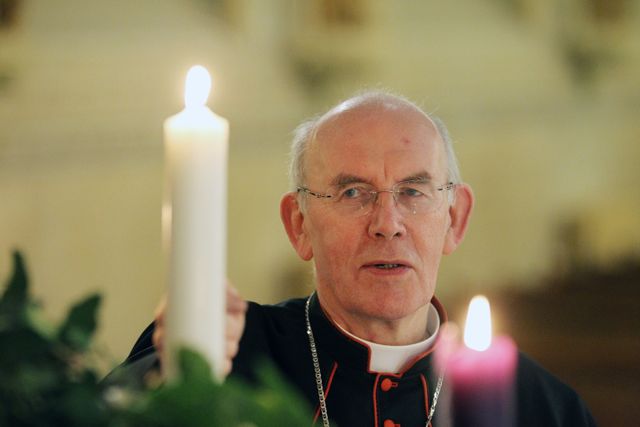 ‘With others, I feel betrayed that those who had the authority in the Church to stop Brendan Smyth failed to act on the evidence I gave them. However, I also accept that I was part of an unhelpful culture of deference and silence in society, and the Church, which thankfully is now a thing of the past.’ – Cardinal Seán Brady

With thousands of words spoken and written in the past twenty four hours about the rôle played by Cardinal Sean Brady in 1975 as a priest in an investigation by the catholic church into child abuse there is really only one issue. Could further abuse of children have been obviated?

The then 14 year old boy Brendan Boland who came before three priests arising from a complaint against Fr Brendan Smyth claims he gave the names of other children being abused. The critical issue is, were the appropriate steps taken to protect those children from further abuse regardless of rôle played by any one of the investigating priests? The current cardinal Sean Brady was asked by his bishop to be part of the investigation into child abuse allegations in 1975. A BBC programme is now alleging that failure to act on the findings led to further abuse by Fr Brendan Smyth. This has again put the Head of the Catholic Church in Ireland in the firing line.

The Head of Barnardos in the Irish Republic Fergus Finlay who has revealed he was violated at the age of 11 has summed up his feelings about Cardinal Brady remaining in office “there is no renewal possible, no recovery of moral authority.”

Cardinal Sean Brady argues back in 1975 he as a priest didn’t have a remit to act other than in the capacity in which he was asked to perform of note-taker during the meeting with Brendan Boland. He further contends  he did what was expected of him in bringing the findings of the probe to his superior, Bishop Francis McKiernan.

Taking what Cardinal Brady says at face value, he is probably correct about the chain of command and the practice of ‘deference’ or referring upwardly, at that time, but the flaw in his thesis is that this lack of moral leadership resulting in Fr Smyth continuing to damage young people .

I recall having a conversation with Bishop Edward Daly of Derry in which I asked ” if you were sitting here in your house and you spotted a gunman on a roof down there training a gun on a member of the security services what would you do? Without hesitation Dr Daly replied “I’d lift the phone.” Bishop Daly did not engage in a discussion with me about “an unhelpful culture of deference and silence in society.” He didn’t suggest he would consult with the Cardinal or the Pope on his course of action.

I also remember asking the late Cardinal, Cahal Daly had he visited any of Fr Brendan Smyth’s victims? He sheepishly answered “No. I left that to the relevant authorities. “I further pressed “but you are these people’s spiritual leader why did  you not visit them?” Bishop Daly chose to ignore that question.

When Cardinal Brady says “I feel betrayed that those who had the authority in the Church to stop Brendan Smyth failed to act on the evidence I gave them” – isn’t he essentially pointing the finger possibly at his bishop, Bishop Francis McKiernan of Kilmore to whom he was Secretary , and at the Head of the Norbertine Order of which Smyth was a member?

The Cardinal’s use of ‘evidence’ in defence of his course of action outlined in his statement, at a minimum, implies more than a rôle as copy taker or note taker but If the Cardinal feels he has been genuinely  wronged by the BBC about the rôle he actually played he has a right like every other citizen to go to court and seek legal remedy to restrain any broadcaster from misrepresenting him.

I knew one of the the late Cardinal Tomás O Fiaich’s Secretaries. He assumed extraordinary powers. He unilaterally decided whether the Cardinal wanted to speak. To get around this physical buffer I reached an arrangement whereby I would call Dr O Fiaich towards mid-night when the said priest had  left Ára Coeli  for the night. The Bishop’s Secretary is a powerful figure in his master’s life. He is normally absolutely trusted and does his bishop’s bidding.

Are we to believe that Fr. John B Brady was a powerless submissive amanuensis? Given what Fr Brady learned, even if we accept he did little more than act as a note taker, in his capacity as Secretary, he would have more than a passing interest in the outcome of what he brought home in a report including the serious claims of 14 year old Brendan Boland. He has confirmed he questioned a Cavan boy whose name was passed to him in the original investigation.

In his response to the BBC programme on the Catholic Church child abuse scandal Dr Brady argues: “In the course of the programme a number of claims were made which ‘overstate’ and ‘seriously misrepresent’ my rôle in a Church Inquiry in 1975 into allegations against the Norbertine  priest Fr Brendan Smyth.”

One has to ask how judiciously chosen by Dr Brady  are terms like- ‘overstate’ and ‘seriously misrepresent’ in his riposte to the BBC? The deployment of the verb ‘overstate’ could suggest that there is a validity attaching to the allegations but of a different shading which ultimately may not alter the course of history because what emerged was a cover up by a catholic church shackled with a curse called ‘deference.’ It is this curse within the Catholic Church which is saddling it with an inwardness, leaving it in the mess in which it finds itself.

As a member of an upwardly mobile congregation made up of mothers, fathers, grandmothers, grandfathers, teachers, doctors, dentists, engineers, barristers, solicitors civil servants and many more professional people, a suggestion by me to our parish priest that the wealth of knowledge in the body of our church might be “shared from time to time with the congregation,” fell on stony ground.

“I’d have to discuss that with the bishop firstly” was the response. Deference and more deference…

“To suggest, as the programme does, that I led the investigation of the 1975 Church Inquiry into allegations against Brendan Smyth is seriously misleading and untrue. I was asked by my then Bishop (Bishop Francis McKiernan of the Diocese of Kilmore) to assist others who were more senior to me in this Inquiry process on a one-off basis only;

“The documentation of the interview with Brendan Boland, signed in his presence, clearly identifies me as the ‘notary’ or ‘note taker’. Any suggestion that I was other than a ‘notary’ in the process of recording evidence from Mr Boland, is false and misleading.”

The BBC flashed a handwritten document on the screen reportedly signed by Fr John B Brady which speaks of ‘investigation.’ Without seeing the papers in this case it is difficult to make a proper judgement about Fr Brady’s part in the investigation into child abuse. A row of this nature over words and where the line of command rested is of little comfort to those further abused by Fr Brendan Smyth.

Cardinal Brady’s portrayal of the culture obtaining then within the catholic church is not being accepted by him today as a reason for his forfeiting his ‘red hat.’ He is clearly pointing the finger of blame at his superiors in the mid seventies, especially the Norbertine Order to which Brendan Smyth belonged.

He is keen to underscore that on his watch he has overseen the implementation of a new anti child abuse strategy with built in protection mechanisms, including a reporting system, to the relevant authorities. He is is simply saying that was then but this is now: He adds:

“With many others who worked with children in 1975, I regret that our understanding of the full impact of abuse on the lives of children as well as the pathology and on-going risk posed by a determined paedophile was so inadequate. It is important to acknowledge that today both the Church and the State have proper and robust procedures in place to respond to allegations of abuse against children. I fully support these new procedures which include the obligation to report such allegations promptly to the civil authorities. I have worked with others in the Church to put these new procedures in place and I look forward to continuing that vital work in the years ahead.”

This statement of a failure to realise ‘the depth of harm’ being perpetrated by child abusers even in 1975 beggars belief: it is worth repeating what Cardinal Brady is saying: “With many others who worked with children in 1975, I regret that our understanding of the full impact of abuse on the lives of children as well as the pathology and on-going risk posed by a determined paedophile was so inadequate.” Where were those priests living? As eleven year old school boys we were ‘live’ to certain individuals lay and clerical.

Put yourself in Cardinal Brady’s shoes. Odium is being heaped upon him from on high. Can you imagine the turmoil inside his head but how could he not ‘realise the depth of harm’ and ‘the full impact of abuse’ on the lives of children at any period of his adult life?

Fergus Finlay has courageously told his story. He has challenged whether there can be ‘renewal in the Church.’ Cardinal Brady has the backing of Rome. At the end of the day he is alone in his head. Whether he steps down as Head of the Catholic Church in Ireland is his decision. The Church is not a democracy.

Many members of the catholic church must be asking can the church survive not to talk of ‘renewal?’

Social share:
Previous ArticleAmicable Polarisation for Now
Next Article Will Assembly sittings end up one day a week?