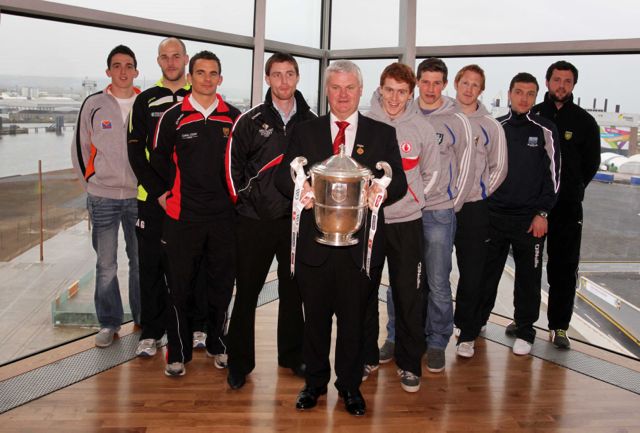 Welcome to our sixth GAA Podcast – ‘To the Point’ – hosted by Adrian Logan.

Each podcast surveys all happenings in GAA as the season develops, with in-depth opinion and analysis from key individuals on and off the field.

This week’s podcast comes from the Glenavon Hotel in Cookstown at the launch of the All Star School of Football, a coaching initiative established to develop Gaelic footballers from the age of 13-17 over the summer months.

The School of Football – the brainchild of Paddy Bradley, Benny Coulter, Ronan Clarke, Brian McGuigan and Paddy Cunningham – has teamed up with the charity CRY (Cardiac Risk in the Young) in order to raise awareness of heart disease in young people.

The Football School is being run across Ulster this summer under the auspices of past and contemporary players.

For further information about the All Star School of Football please email: allstarschooloffootball@hotmail.co.uk

When the official launch had come to an end Adrian managed to collar the following legends of the game to harness their thoughts on this year’s Ulster and All-Ireland Championships:

Benny Coulter: 2010 All-Ireland Finalist with Down. Benny has also represented Ulster and Ireland.

Points for discussion are documented below.

13.20: If you could change one thing in todays’s game what would it be?

22.25: Playing for your county? Has Clones the edge on Croke Park on Championship day?

23.28 The Ulster Championship is wide open – who is going to win it?

27.30 Fermanagh pride back in the jersey?

31.26 How would the southern teams do in the Ulster Championship?

Social share:
Previous ArticleWhy do nine out of ten who vote in Northern Ireland, vote for ‘us and them’ parties?
Next Article Should political prisoners’ records be scrubbed to end jobs discrimination against former inmates?