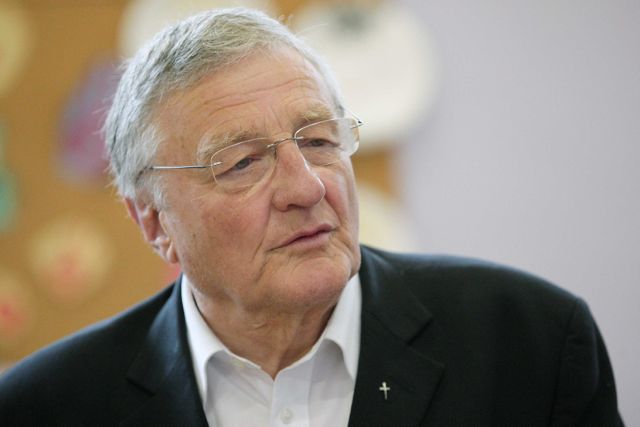 All of a sudden eyes have opened and ears are listening – the eyes and ears of the political and media worlds.

They have been brought to attention by two speeches at the Sinn Fein Ard Fheis, and the emerging news of a private dialogue between republicans and a “very significant group of people” from the Protestant/unionist community.

That dialogue is about reconciliation.

And, last night in Killarney, Martin McGuinness and Declan Kearney slipped snippets of information into their party conference speeches; just enough to get the journalists interested.

Then the former Methodist President Harold Good, a witness to IRA decommissioning, confirmed his participation in what have been off-stage talks.

All of this has been developing over a period of some weeks – its starting point an article penned by the Sinn Fein National Chair Declan Kearney in An Phoblacht at the beginning of March.

That article is remembered for one word – sorry, and Kearney’s challenge to republicans to use it, not to apologise for the IRA war, but to acknowledge the hurt of all armed actions.

He wrote about wanting to develop  “authentic reconciliation” – this to be the next phase in the peace process moving beyond the ending of armed campaigns, decommissioning and political agreements.

That article, and subsequent interviews by Kearney, became the focus of much comment and debate on this website.

And those involved in the conversation at eamonnmallie.com will not have been surprised by the news coming out of the Sinn Fein Ard Fheis.

“A range of Protestant and unionist people have been engaged privately with myself and other party colleagues to explore our respective concepts, principles and language.

“They have come from within Protestant Churches, loyalism, business, community and civic life,” he said.

That story has been at eamonnmallie.com for weeks. All it needed was a reading of the tea leaves across the various posts and responses.

And, some of those involved in that behind-the-scenes dialogue are regular contributors here – people who immediately recognised the potential in the type of initiative Kearney said he wanted to develop.

Two months ago on this website, the UDA leader Jackie McDonald criticised the supergrass and HET approaches to dealing with the past, and wrote:

“Surely talking to each other and engaging in conversations such as those involving Declan Kearney, Harold Good and many others is a more positive way forward.”

That talking finally became headlines last night – talking in which McDonald is involved.

In today’s Belfast Telegraph, he tells me: “I think it’s for real. Real questions are being asked and real answers are being given.”

Other loyalists are involved, including former prisoner John Howcroft, another regular contributor to this website.

Within days of the Kearney An Phoblacht article, Lord John Alderdice posted the following thought:

“There are some important lines in here, especially given who is saying them and where it’s published, and it would be a serious mistake not to explore them.

Alderdice is now part of that exploration of possibilities that is happening in private, as is Alan McBride – a man who lost his wife and father-in-law in the slaughter the IRA caused on the Shankill Road in a bomb explosion in 1993.

Someone else involved in the talks is the Presbyterian Minister Rev Lesley Carroll, who was part of the Eames-Bradley Consultative Group on the Past.

She recognised immediately the importance of that word – sorry, used by Kearney now almost three months ago.

On this website Rev Carroll wrote: “It is a humanising word for both the one saying it and the one to whom it is said.”

And in his Ard Fheis speech last night Declan Kearney spoke of a dialogue in which “we listen to each other unconditionally, language is humanised and all voices are heard, north and south, republican, unionist, nationalist and loyalist”.

His use of that word humanised is one small indication of how republicans are reading and listening to what is being said by those from the Protestant/unionist community who are engaged in this discussion.

In today’s Belfast Telegraph Rev Carroll tells me: “I believe this is a real and genuine request from within the republican movement which requires robust engagement to bring our society closer towards reconciliation.”

So far, the contribution from some in that that quarter could be characterised as more ‘Smart Alec’ than smart thinking, and, again in this process, the heavy lifting is being left to others in the Protestant/unionist community.

Writing elsewhere on this website Harold Good describes the search for the elusive ‘How’ – meaning the structure or process within which the past will eventually be addressed.

“It will only work if it is desired, inspired and owned by the grassroots, rather than yet another solution which has been thought up and handed down from on high,” he writes.

There is also an international thought from Aaro Suonio – the Finn who had a long role here with the IICD – the decommissioning commission.

He suggests that this generation “should record their views, thoughts and sentiments” then leave them for future generations to study with “less emotion”.

The big conversation that became news last night has been happening for some time now – and there are people involved who will find the ‘How’ that Harold Good speaks of.

Others need to join the dialogue, need to help shape the process, and think of reasons to join in rather than excuses to stay out.

We are forty years on from 1972 – and all of those Bloody Days in what was the worst year of this conflict.

Surely it is time to discuss not only what happened, but why – and, more important than that, why it should never happen again.

Social share:
Previous ArticleShould political prisoners’ records be scrubbed to end jobs discrimination against former inmates?
Next Article ‘And I shall have some peace there, for peace comes dropping slow’