You are at:Home»News & Current Affairs»Opinion»Cancer of Sectarianism – A personal reflection by Michael Culbert
Social share: 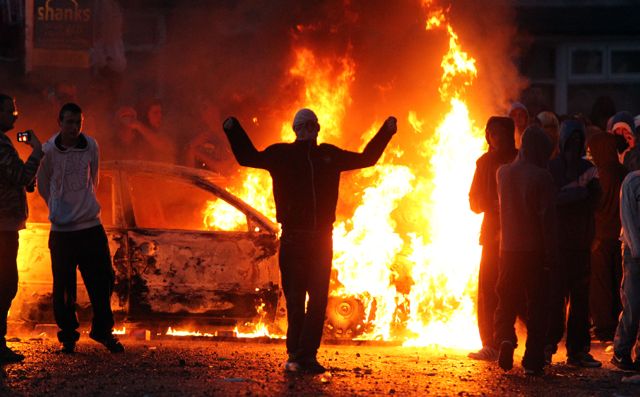 I attended the CRC conference on Monday 14th May which was addressed by numerous politicians including Martina Anderson and Jonathan Bell.

Both made excellent contributions to the floor and the reception for what they said was, to me, overwhelmingly positive and accepting.  What we in the audience heard them say was that the legacy of our conflict and the need for rebuilding society  was not the sole responsibility of the working class- the class which constituted the majority of those imprisoned for participation in the conflict.

The media has picked up on the comparisons they both made to ‘golf club types’ and the sectarian attitudes such people hold. No-one among the group with whom I sat was under the impression that they were referring specifically to ‘golf clubs’  or their members, but that they were in fact referring to the middle classes, many of whom  do inhabit such places.

They no more meant to specify golf club members as would I be in specifying people who eat cucumber sandwiches when I may use the term ‘the cucumber sandwich brigade’. We know what we mean when we use these sweeping terms – so to deny that is ridiculous.

I cannot figure out what the big deal is about. I am a former IRA prisoner and currently work on behalf of the former political prisoner community. The conference title was ‘No more them and us?’ a sentiment with which I strongly agree. I do not hold a ‘neutral’ view on the political or social situation today but I do try to be objective. Nor do I consider ‘Sectarianism’ to be the core problem on this island.  But it certainly is one issue to be dealt with. One person I spoke with at the conference is a former senior RUC member. We are civil to each other. The war  is over, so why not?  I imagine he feels the same.

I think I can safely say that I hear reference to Sectarianism daily in the media; to it being the scourge of this society etc etc, and normally those comments are interlinked in some way to a violent event or comment or some issue relating to a violent event in the past. I do not think I have ever heard any comment in the media not implying that the issue is a working class issue.

Mr Bell spoke of good relations requiring ‘equality of opportunity for all’ in this society. He spoke of the need for a ‘shared and reconciled society’ and I agree with that. He also spoke frankly about the confidence required by his party leadership to move into Government with Sinn Féin – I am sure that it did and likewise I am sure for Sinn Fein. He also spoke of the need for strong leadership in such situations, and we all agreed there.

Ms Anderson spoke of the ‘hidden sectarianism’ of the middle classes and most nodded their heads in agreement. She then spoke of good relations and the requirement for them to ‘be built on equality’. Who could disagree?

Later Justice Minister  Mr Ford spoke and referred to ‘the underlying sources of/for divisions’ here and that ‘no where should be out of bounds for anyone’.

I cannot help wondering why the media did not pick up on these quite remarkable, positive comments from three different political parties – all signalling clearly the commitment to equality of citizenship for all of the citizens in this community.

As a Republican I am not content to remain in this political entity but I am content to support the structures as they exist because we do require a peace built on equality and justice for all of the people here – Unionist and Republican, Loyalist/ Nationalist and those who are indifferent. It is not all there yet but I am reasonably confident that changes will continue. We have travelled a long way politically in a few years. I personally am encouraged  by the language currently in use by people previously strangers to such usage.

It is about time that the ‘nice’ people were held to account for their silences, ignoring of realities, lack of questioning of obvious wrongs and living detached from the harshness of the decades we went through. If the media is so insistent on classifying sectarianism as a major issue here, and now the media is allowing the middle classes to say ‘not I’, then we have to ask the media – who exactly are the people with ‘sectarian’ views?

If the middle classes are to deny their roles – by actions, words or indeed by the lack of such then they have to be asked by someone- who did have  the power to discriminate in employment, to allocate funds to roads or factories or indeed decide on their locations? Who did have the ability to make decisions on housing, where estates were built, how they were designed and who should live in them? Who indeed decided on what schooling systems we should have? No-one in my street was party to such decision making and I would guess no one from any working class neighbourhood  in a Unionist area was – so back to those actually in the golf club who choked on their gins when confronted by Jonathan Bell and Martina Anderson and their comments. Working class people were never alone in being the manufacturers of our issues.

The above issues of housing and schooling were discussed at the CRC conference but unfortunately were looked at in the here and now.  From my perspective we have to go back and examine the root causes of our conflict, not the obvious, manifest issues of today such as segregated schooling and housing which are the outcomes of core problems. When we are looking back – for positive learning of mistakes in order to build for a better future, let us recall the questions I posed above – who were the decision makers and what underpinned the decisions made?

I am aware that Jonathan has since offered an apology for his comments. Perhaps this is an arena for some honest discussion. Is there anyone from the decision making class prepared to indicate anything other than denial of any responsibility?

I want to thank Martina and Jonathan for shinning a light on this issue.

Editor’s note: Since the drafting of Michael Culbert’s article above – Martina Anderson has also said that she regrets any confusion arising from her remarks.

Michael Culbert was an IRA member who spent 16 years in prison. Nowadays he is the director of the group Coiste, a group that helps republican ex-prisoners.