You are at:Home»News & Current Affairs»Opinion»Where will the newspaper industry be in twenty years time?
Social share: 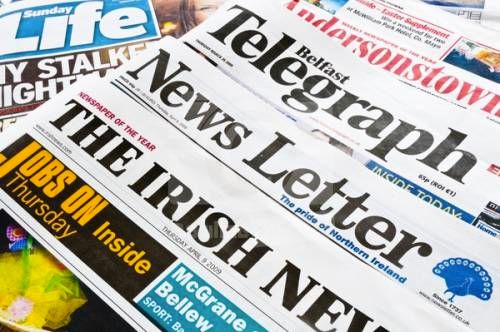 Where will the newspaper industry be in twenty years time? The only certain answer to this question is that it will not be in a better position than it is now. The only constant in print journalism is decline.

I’m currently a student at the National Council for the Training of Journalists Diploma at Belfast Met, and it feels like I’m running for the door into a career in journalism as it’s about to shut. Some would say that door has been shut for a while already, only opening to let one person in as it lets three or more people out.

We know why this is: plummeting sales as content becomes available online, and a subsequent plummet in advertising revenue. The expenses involved in running a newspaper have almost always been covered by both advertising and sales revenue, not one or the other.

Northern Ireland’s newspapers have taken an understandably conservative approach to the crisis in their industry. It makes little economic sense to make all their content available for free online when they are forking out thousands of pounds a week to send paper editions to every corner of the Province. The result of this has been relatively underdeveloped news websites.

This strategy cannot continue. If Northern Ireland’s regional titles want to act as the primary source of news here then they must invest heavily in developing their online presence. It is particularly important that this process starts now, when these titles still have enough of a reputation to make readers pay attention to their websites.

This investment should be the beginning of a process of abandoning print almost completely, with all the expense that it entails. There is much that can be offered to online readers that cannot be offered in a newspaper; blogs, podcasts, online video and more extensive photography to name but a few things. News websites which are sufficiently innovative and consume enough web-space can succeed.

The price of not finding a sustainable model for news production would be catastrophic; what are today regarded as problems in the newsroom culture would become the norm. A journalist expected to shoulder an ever-increasing workload is more likely simply to regurgitate press releases from marketing and PR companies than to seek out hard news. Narrowing profit margins will make the chill factor, which scares journalists out of asking serious questions for fear of libel charges, even more potent. An editor who needs to get his money’s worth out of every reporter is unlikely to assign one of them to a lengthy investigation.

In other words, a newspaper with no money would steadily become a stenographer of the rich and powerful, and if this were to happen to our newspapers we’d be better off without them at all. This prospect should be particularly alarming in Northern Ireland, where Stormont departments and government agencies employ a legion of press officers to manage the information we receive.

Forget what you’ve heard about citizen journalists and the social media revolution, without well-trained and tough journalists on a decent wage any notion of democratic accountability is a sham. At the moment these still exist, but for how long?