You are at:Home»Politics Podcast»Mallie on Politics (Episode 8): Who is in the dock – Hain or Larkin?
Social share: 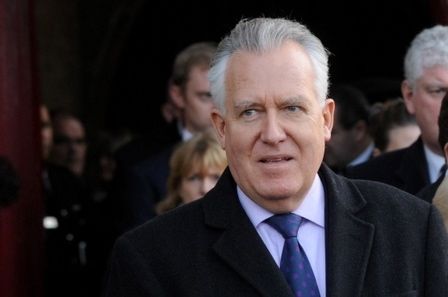 It is the hottest discussion in the corridors of Westminster and Parliament Buildings with swords drawn in many cases between politicians and the most senior legal figures in the land. This remarkable legal row was sparked by the publication of former Northern Ireland Secretary of State Peter Hain’s autobiography.

Following Mr Hain’s appointment of Bertha MacDougall as interim Victims’ Commissioner there was a legal challenge to the appointment. This resulted in Mr Justice Paul Girvan finding against Mr Hain and his appointment.

In his book Mr Hain says “with my officials I thought the judge off his rocker, a view privately expressed to me by the Lord Chancellor Charlie Falconer, who was equally bemused.” This utterance by Mr Hain was triggered by a finding by Mr Girvan in which he found that the Secretary of State’s decision to appoint Bertha MacDougall had been”improper and politically motivated.”

In response, Attorney General, John Larkin sought permission to prosecute Mr Hain in the wake of Lord Chief Justice Declan Morgan accusing Hain of a potential “assault on the judiciary.”

Listen to my discussion below or download the MP3: