You are at:Home»News & Current Affairs»At last – A good report from the RVH – through the eyes of a stranger
Social share:

Belfast’s Royal Victoria Hospital (RVH) has been taking a hammering of late over health standards. Perhaps it takes a visitor to our shores, such as American Television correspondent Greg Dobbs (pictured below), to see the hospital in a different light.

A former ABC International Correspondent, Dobbs fell ill here on arrival and discovered a silver lining in our free Health Service. Mr Dobbs had travelled from Denver, Colorado, to Northern Ireland to make a half hour documentary for his current network, HD.Net, about Northern Ireland’s transition from ‘war to peace’.

No sooner had he touched down at Belfast International Airport than he was being whisked off to the RVH suffering from a very serious bleed.

The following is Greg’s personal account of his experience of Northern Ireland’s Health Service: 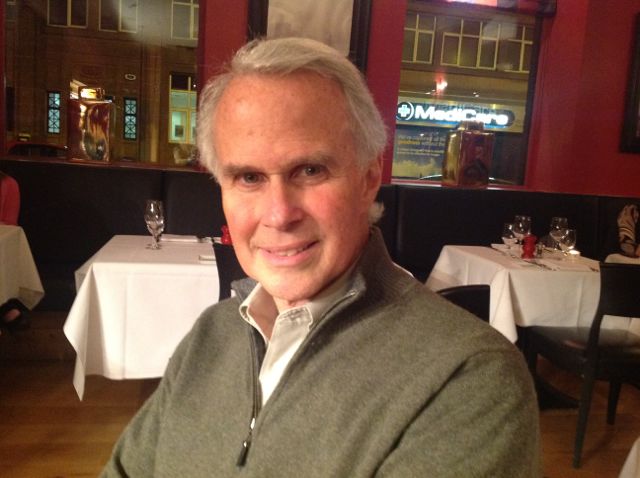 When I’m sick, I want the world’s best health care as much as anybody. But I wasn’t real optimistic a couple of weeks ago when, on my way to shoot a television documentary, I suffered a significant amount of internal bleeding aboard an overnight flight from Newark. From massive blood loss, collapsing twice after we landed, evidently I almost died.

That’s why I’m ecstatic to report that my fears of inferior care were ill-founded. In fact, I’m ecstatic to be around to report anything at all. But I am, and here’s one of the reasons why: an expensive and innovative (Israeli designed) tool called the PillCam. 36 hours after launching on a fantastic journey through the length and depths of my digestive system, collecting almost 60,000 diagnostic images inside me to pinpoint the source of my bleeding, the PillCam successfully completed its mission.

The thing is, this 21st Century treatment wasn’t at the internationally-famous Mayo Clinic, or the vaunted Cedars-Sinai in Los Angeles, or the top-rated New York Presbyterian. No, it was at the big, battle-tested, National Health Service trauma center in Belfast, Northern Ireland called Royal Victoria Hospital, known to locals, as well as reporters like me who covered the warfare here in the 70s and 80s for ABC News, as the Royal Vic.

Frankly, that’s why I had felt so low about what I faced from the moment I was lifted into an ambulance. The Royal Vic was for victims of external bombings, not internal bleeding. What’s worse, I was being thrust into the hands of the cash-strapped budget-dependent National Health Service, and I would be hospitalized in the long-wartorn city of Belfast, not the modern metropolis of London. I was even more scared than I might have been.

It hasn’t been a perfect experience. I felt lost in the chaos of the emergency room. I’ve had bloodlines spring leaks where they’re inserted in my arms. I’ve heard fellow patients screaming all night. And while recovering, I’ve been presented with a couple of plates of food I wouldn’t pay for at a restaurant. But you know what? It’s a hospital! As a veteran of a few other life-threatening traumas, I’ve suffered the same at institutions in the U.S.

More important, just as I have in American hospitals, I’ve had the high-tech procedures I needed here when I needed them. Two angiograms, two endoscopies, CT scans, x-rays, a colonoscopy, and that tiny alien capsule that I swallowed, the PillCam. Some argue that in a universal

healthcare system like this one (which critics would call a euphemism for “socialized medicine”), you’ll only get urgent care if you have urgent needs. Well, about ten years ago when my back collapsed and I was reduced to crawling around my house with screaming pain until I could have some vertebrae fused, I’d say the need was pretty urgent. But it took a week-and-a-half to get me into surgery. That was in suburban Denver.

The bottom line is, maybe it’s socialized medicine but the doctors and nurses and procedures and protocols here are first rate; they saved my life. By the way, I have pre-existing conditions, which disqualify me for most insurance at home. Here? Except for personal medical history to help treat me, no one even asked. In fact, the bureaucracy is so minimal and the priorities so different, no one has even asked to see an ID card to prove who I am, let alone a credit card to prove my ability to pay!

And the cost? The “emergency” parts— the ambulance, the ER, the transfusions— came with no charge. The rest? Oh, since I only came to Belfast to shoot a television news segment and don’t pay taxes and thus am not insured, I’ll pay alright, but since the model for hospital revenue isn’t based on market-driven, sometimes price-gouging profit centers, I won’t pay through the nose. If you think it’s no different in the U.S., you’re not paying attention. Market-driven healthcare systems certainly provide the best… but a big downside is cost.

And here’s the biggest difference between the two healthcare systems: this one, in the U.K., is open for everybody. Residents don’t have to assess and agonize over the cost because they don’t have insurance. If they need medical care at any level, they just go. As I did. And get fixed. As I am.

And guess what: anyone here who doesn’t like their universal healthcare system and wants something more can have it, through private insurance, if they’re willing and able to pay for it. Just like us. Socialized medicine? It’s not perfect, but then, neither is ours. This system saved my life. That’s good enough for me.

Dobbs, a London based correspondent in the 70s and 80s, reported regularly from Belfast and old habits die hard: