You are at:Home»News & Current Affairs»Where will Mike Nesbitt take the Ulster Unionst Party? Who is Mike Nesbitt?
Social share: 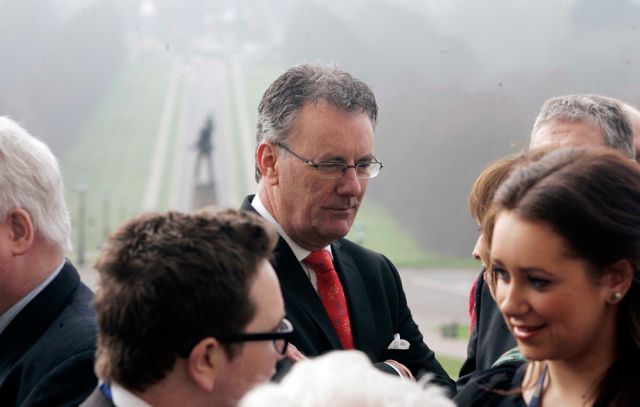 He  hasn’t said anything to date which places him either too far to the right or to the left. His unequivocal pro grammar schools stance however on schools like Campbell College, sends out its own message.

Does that mean he supports the ‘selection process’ and is there any logic to that stance? Colleges like Belfast’s Campbell College facilitate children of parents who can afford to avail of that style of education. Many of these children are not always ‘transfer’ material to put it crudely. In less well off areas many of these children end up in cash strapped secondary schools.

Is this smart of Mike Nesbitt? Does his very overt espousal of the Grammar school system go any distance towards serving the interests of deprived, impoverished young people of Lower Shankill, Sandy Row, Bangor’s Kilcooley and Rathcoole  estates?

How connected can he be with that non voting constituency locking himself into the Grammar school sector which happens to be a minority in our society?  If he genuinely cares about the whole of the community why eschew huge swathes of the population for whom there is no genuine pathway, lo contrario, only obstacles, leading to post eleven years education?

Nesbitt’s approach to education doesn’t mean he is not smart or intelligent but might lead one to question his judgment when it comes to his social awareness.

It  is rare nowadays for anyone among the present crop of Ulster Unionists to have even a basic understanding of economics. Nesbitt has a grasp of this.

He is not, to his credit, a sycophant but one senses he is irascible and volatile. I often observed elected party colleagues approaching the then party leader David Trimble with trepidation in the canteen in Parliament Buildings, the odd time he frequented those quarters.

It was painful to watch. David wasn’t good at small talk. His tray was his escape hatch. One sensed the UUP leader couldn’t quite wait to get away.  Mike Nesbitt is more personable but while David Trimble’s aloofness may be partially down to shyness, insecurity whatever, Nesbitt as far as one can see is a different kettle of fish. He is confident, opinionated, articulate and comes armed with years of ‘live’ assumed journalistic arrogance (I know these things) which gears him at all times for the fray.

Asked for an opinion on the aspiring Ulster Unionist party leader one young woman cut to the chase and  answered “he is smug and smarmy. Definetly not for me. Three years in the party and he wants to be leader. No.” She protested.

I actually like Mike Nesbitt in all my professional dealings with him. I have detected an interesting trait in his  ‘on air’ performances which I find commendable if a little irresponsible, particularly now if he becomes party leader. He goes on the radio quite often without having done his homework. What is endearing is the fact that he openly admits he has not seen or read or heard someone’s remarks on a particular subject.

While such honesty is admirable,  when one is a backbencher one can get  away with that but the game changes when one is party leader. The SDLP’s Dr. Alasdair McDonnell learned this to his cost when he sounded off on Assembly salaries. Mr Mc Donnell’s personal position was savaged by his deputy leader Dolores Kelly and other party colleagues. The moral of the story is Mike, ‘know the facts before you open your mouth.’

Mike Nesbitt has lived life.  A lot of journalists know him well. He will have to be careful about what he says and how he behaves.  In putting himself forward for the leadership of the Ulster Unionist  Party the Cambridge graduate is laying his personal life wide open to forensic scrutiny. This is not my area of journalism but always better Mike, to know your enemy.

Those who have observed the Strangford MLA at close quarters speak  of his being something of  a ‘wild man’ in the past. That is fine but this is now. He is asking people to put their faith in him as a leader. The best thing he can do is put all his cards on the table facing upwards, leaving no stone unturned in order to secure himself in his leadership and then face, come what may.

Nesbitt has a big asset  in his wife Lynda (Bryans) who is a thorough going lady. While she too is formidable in her own right her presence by his side will soften that incendiary side to the MLA’s persona.

What is Mike Nesbitt’s vision for the Ulster Unionist Party? One source who knows that party inside out predicted Danny Kennedy would have allowed the party to drift towards the DUP while arguing John McCallister’s instinct is correct in wanting to pull the party out of the Executive to give it a new identity. The same source contends John McCallister would not make a good leader.  That is one man’s opinion. Will Mike Nesbitt guarantee there will be no footsie  with the DUP?  Could he stop it or is it too late regardless?

David McClarty and George Savage were literally frozen out in The Elliott era. McClarty  gave the hierarchy a bloody nose having himself returned to the Assembly very comfortably as an independent. George Savage is back ‘calving’ cows very successfully.

Should Mike Nesbitt become party leader? Will he purge the old brigade? Will he move against the likes of Sam Gardiner and Michael McGimpsey? They are known to be worried.

Leading any party is hard work as David Trimble discovered, as Reg Empey found out, as Tom Elliott came to realise. Drop a depth charge like Mike Nesbitt into a party like the Ulster Unionist Party and you have an interesting cocktail. It could be a real fizzer.

Social share:
Previous ArticleMallie on The Arts from Ross’s: with artist Paddy McCann
Next Article Sorry