You are at:Home»News & Current Affairs»Opinion»Robinson – The leader of the pack
Social share: 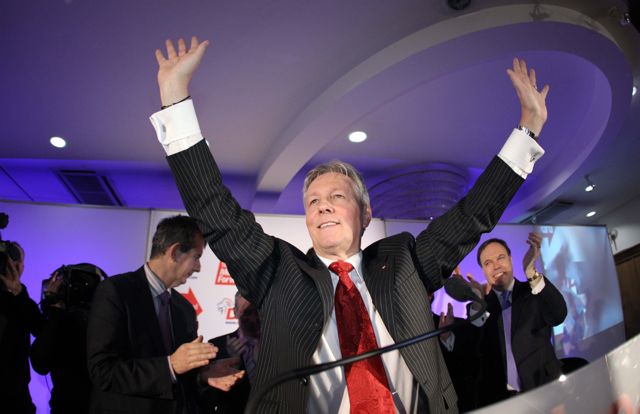 When the Iris affair erupted just over two years ago, Peter Robinson looked like a busted flush: a majority of politicians and commentators thought he was a goner, and that he was about to shuffle off into premature retirement.

Iris resigned both from Westminster and the Assembly, while Peter went on to lose the Westminster seat he had held so comfortably for decades. It seemed the Robinson dynasty, like the Roman empire, was doomed to decline and fall.

The Iris episode is a perfect example of how cataclysmic events can suddenly appear out of a clear blue sky. But, thunderbolts apart, today Peter seems unassailable as party leader and First Minister.

His performance is one of a number of factors that have reduced unionism’s in-built insecurity to its lowest level for decades. He has been a political defibrillator. He has calmed unionist apprehensions, quite an achievement for a figure who used to be associated with increasing them.

He has achieved this by making shrewd calculations about changed political realities. He played a key part in building up the DUP into the largest unionist party, and later provided support for the Paisley transformation from confrontation to cooperation.

He was slow in following his then party leader into the territory not just of powersharing but of relationship-building: initially he refrained from Paisley-style chuckling. Instead he allowed himself to be spooked by a council by-election which he wrongly feared indicated a surge of support for Jim Allister’s anti-Assembly sentiment.

So when he replaced Paisley he initially applied the brakes. It wasn’t a hugely bitter time but nor was it constructive. The forecast by Gerry Adams that the executive would experience “a battle a day” was not borne out but there was a certain retreat to the trenches: the executive did not meet for some months.

Peter evidently learned a lot from the Iris episode, for instance that east Belfast voters did not like large expenses claims. More importantly, he discovered he had friends in high places, including London, Dublin and, perhaps crucially, in Sinn Fein.

The backing he received from these sources was not personality-driven: it was all about rescuing Peter not for his own sake but for the sake of the settlement. It was not about personal goodwill but about clinical calculation, an art at which he himself excels. And he realised it was all the stronger for that.

But he himself seemed personally grateful towards Martin McGuinness for watching his back and helping ensure his survival; and, after a while, Peter started to do a bit of Paisley-style chuckling.

Who knows what Robinson-McGuinness arguments and disagreements go on behind closed doors at Stormont? There must be many of them, but the two sides are careful not to let any appearance of hostility and antagonism escape into the open air.

They have also elevated the practice of agreeing to disagree into a new art form. Issues deemed too difficult for the moment are dealt with a policy of constructive postponement.

All this has been made possible by strong electoral endorsement of the Robinson approach. Of the 108 members of the Assembly only one, Jim Allister, is against the whole system.

The Ulster Unionist party vote meanwhile goes down in each election, so that its new leader inherits, in addition to dismal morale, fewer than a score of Assembly seats and zero Westminster representation. How the once-mighty have fallen.

The new man faces a DUP leader who has accrued decades of cunning and in recent years has, in the manner of a soccer manager, put together a promising youth squad. The UUP by contrast is facing relegation: any comeback will take years.

The inexorable rise in the DUP vote indicates that most unionists now regard it as the natural party of government, for the blip of the loss of Peter’s Westminster seat was followed by substantial gains in the next Assembly contest.

Another source of self-confidence for Peter comes from the state of play within the DUP itself. No ambitious leadership rivals are in sight while it is blindingly obvious to any doubters in the ranks that under Robinson the party is going from strength to strength.

The fact of the DUP-Sinn Fein coalition is personally disconcerting for some senior figures, a few of whom seem to look back with nostalgia to the old days of acriminous trench warfare.

But why would they wreck the Assembly, why throw things back into the melting pot, why relinquish power?

The present arrangements are working well from a DUP perspective, though in broader terms both the party and unionism need to tackle the issue of low Protestant turnout in elections.

A person who years ago asked Ian Paisley what the difference was between the DUP and UUP says his reply began with one word – “Class.” The fact is that many, especially in the middle class, continue to regard the DUP as not quite, well, respectable enough to vote for.

Robinson is making efforts to persuade them to come on board, partly because all new votes are good votes and partly to ensure they will not become part of any UUP revival. To do so he slips into statesmanship mode, delivering occasional speeches on integration, especially in schools.

The paradox about this apparent outreach to Catholics, which has actually caused some alarm to the Catholic church, is that it is largely aimed at Protestant middle Ulster. It projects that the old days of disagreeable bigotry have gone and that the DUP is on the road to becoming, well, politically correct.

It further communicates that there is more to the DUP than simply savouring the delights of office. It seeks to convey that unionism is – finally – coming up with a mission beyond the negative. Devolution, it declares, is about improving society and decreasing divisions. At last unionism has a vision thing.

The issue simultaneously gives Robinson valuable cover against the potential growth in London, Dublin and Washington of any sense that DUP ambitions have essentially been realised and that ahead lies only stasis.

More than one commentator has argued that the whole thing is a transparently cynical Robinson vote-grabbing move to mobilise currently apathetic Protestants rather than a sincere initiative.

So what? Many good ideas start off as diversionary gambits yet develop a beneficial life of their own; and anything that reduces political listlessness will probably turn out to be valuable.

Robinson occasionally throws in a bit of balance to reassure the DUP faithful that he has not gone soft, and will not go too far too fast. His otherwise puzzling dramatic declaration that he would defend to the death the emblems of the prison service was an example.

While a lot of this is not that subtle, he has had the huge advantage that his chief adversary, the UUP, has for some years been dysfunctional and directionless, and unable to adapt to the new era.

That said, he has been impressive in dealing with setbacks such as his marital problems and the loss of his Westminster seat. He has adjusted to the new realities and persuaded a unionist majority to do so too. For once, unionism is ahead of the game.

Social share:
Previous ArticleReal democracy without opposition?
Next Article New wave of feminism for women of 2012