You are at:Home»News & Current Affairs»Opinion»Real democracy without opposition?
Social share: 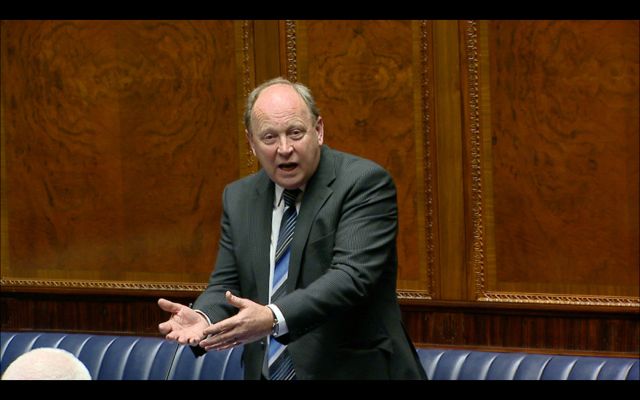 The only opposition standing in Parliament Buildings. Image courtesy of NI Assembly

It is not for me to offer guidance to the Ulster Unionist Party as to whether they should become an opposition party in Stormont or not. Nonetheless, it ought to be a matter of  real concern that we have not yet had any decent debate as to what role opposition might/could/ought to play in the maturing of our local institutions.

Thankfully, we do have very stable institutions. But we should be under no illusions that what has happily brought us to this point will serve us as well in the future.

Politics is by nature adversarial in our democracy, and that style is reflected in the layout of the House of Commons where government and opposition face each other every day across the table and the chamber at close quarters.

In Stormont most members face each other across an empty space – is that of itself symbolic? In both Cardiff and Edinburgh the chamber is semicircular and tiered, and the tone of political engagement seems rather different due to that physical arrangement.

Opposition can take many forms in almost any arena of life. In Syria at present, opposition seems to have brought the country close to civil war. In London, the Occupy movement sought to express its opposition to big business in visible 24/7 presence on the streets.

Opposition to welfare reform has ranged from large scale public demonstrations in our cities to legislative ping pong in Parliament between the House of Lords and the Commons (who always win in the end).

Not surprisingly, opposition usually leads to great resistance by those in power who are being opposed. Sustained opposition may eventually lead to compromise and even substantial change. Yet it is not the only model for effecting change in policy or practice.

Challenge is always important and must never be confused with opposition. I suggest that real challenge to those in power is always needed and that it should be welcomed, encouraged, nurtured and protected.

Unlike politicians or their parties, critical friends rarely seek power. They usually only seek to be heard and their views factored in. Their starting point is one of positive helpfulness to those they are engaging with – even if they profoundly disagree with them.

They are not an opposition to be outwitted, ignored or rubbished. They have been invited in, and are glad to offer their best critique, because they see the need for policy to develop and are not themselves tied to an ideology.

This type of engagement seems all too rare. Most groups (whether political parties, institutions, community associations, clubs or churches) seem to work on the assumption that they already have all the wisdom they need within their own immediate membership or circle. The levels of apathy, disengagement and even hostility surely tell us otherwise.

In political circles, the Civic Forum is obviously dead, but the need for challenge has not gone away – you know. It never will. Yet where is the challenge of the critical friends to realistically come from? The difficulty in answering that question should trouble our MLAs every bit as much as those of us in wider civic society.

Social share:
Previous ArticleSpoiler alert
Next Article Robinson – The leader of the pack