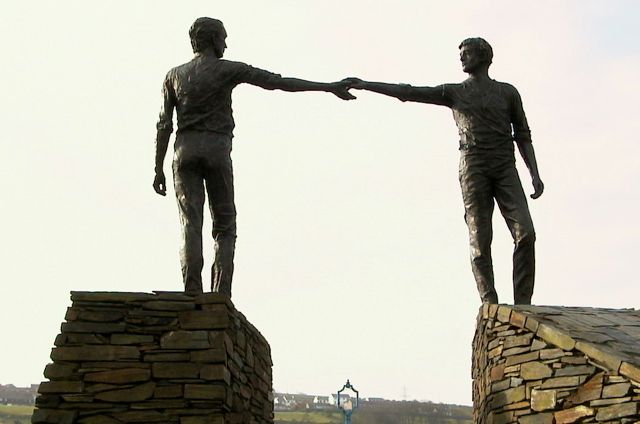 The Ulster Unionist MLA Mike Nesbitt was a handy athlete at one time; if I remember correctly in the two-lap 800 metres and over the 400 metres hurdles.

In both events you need to be tactically astute.

Going too fast too soon in the half mile track event often means jogging on the spot in the home straight as others race by – a promising start becoming a poor finish.

And if you misjudge the hurdles race, any one of the ten barriers has the potential to knock you off your feet.

So maybe the one-time runner was applying tactical racing thoughts, about pace and positioning, when he responded a few days ago to an article penned by Sinn Fein’s national chairperson Declan Kearney.

Kearney challenged republicans to say “sorry” – not for the IRA war, but for the human hurt caused by all its armed actions.

The article was placed in An Phoblacht; its publication in that newspaper to first address the republican base, but its wider intention to speak to unionists.

Kearney acknowledged that: “A deep suspicion remains within unionist communities towards republicans due to the legacy of the armed struggle.”

And that deep suspicion was heard in the initial party political reactions both from Nesbitt and the DUP’s Jeffrey Donaldson.

Donaldson again focused on Gerry Adams’ denial of IRA membership and the Kingsmill massacre of 1976, with Nesbitt asking Kearney if he would describe the killing of Protestants in that attack as “a war crime”.

From the Ulster Unionist this was just one of the 28 questions he said he had for clarification after publication of the An Phoblacht article; an indication from the one-time Annadale Strider of a marathon rather than a sprint approach.

At the weekend, I told a Sinn Fein youth conference that it is perfectly fair for journalists and others to ask questions of Gerry Adams and Martin McGuinness about the IRA and their roles.

And, those questions will continue to be asked, until there are believable answers.

I was one of three journalists – along with David Cochrane of Politics.ie and Sarah Bardon of the Daily Mirror– invited to speak at that Dublin conference, where I also said that addressing the past is not just about asking questions of republicans.

There will be many questions for governments, security forces, intelligence services, politicians, including unionists, churches, media and many others – and the “war crimes” debate will go wider than the armed activities of the IRA and loyalists.

That is if we want to go there.

How agents participated in murder, and who knew, are questions that also demand credible answers.

Sheridan – now chief executive of the peace-building organisation Cooperation Ireland – was targeted by the IRA.

But he recognises the potential significance of an initiative that could see the republican leadership use that word sorry in accepting the hurt caused by armed struggle.

Sheridan and Good have a better feel for these things – can read republicans better than political unionists can.

Long before the peace and political processes, the churchman took the risk of speaking to republicans, when others ran a mile from such an engagement.

And on the Kearney article, he commented: “The time has come to take each other seriously, to respond to clearly genuine ventures without assumption of ulterior motive or hidden agenda.

“Talk, truth and trust – these are the three Ts that will release us from our tragic past and take us to a new place whatever its shape or form,” the Rev Good said.

In an editorial the Belfast Telegraph commented: “Kearney’s comments…deserve close attention. Of course there will be some who will dismiss any apology out of hand, such is their grief and their distrust of republicans.

“But could it be a tentative step along the way towards reconciliation which everyone really wants?

“For that to happen the mainstream republican movement needs to act as he [Kearney] suggests and utter those necessary words.”

That is the challenge to republicans, and if they deliver, then it will be for others to reciprocate.

On the last lap of this article, I want to return to the track and the issue of tactics.

Those who know this sport will remember a famous race over 1500 metres in Oslo in 1981; remembered for a remarkable victory by the pacemaker Tom Byers who held off Steve Ovett.

Pacemakers usually step off the track or are swallowed up by the pack, but Byers took this track contest outside the tactical norms, stayed in front and could not be caught by Ovett, the then Olympic champion at 800 metres.

So, what I am saying to Mike Nesbitt and other unionists is that pacing and positioning – while important – don’t always produce the best results.

If republicans are involved in a genuine initiative that could produce a statement saying sorry for all the human hurt caused by the IRA campaign, then we need momentum not stalling; quicker not slower.

And if the initiative is not serious, then there will be only one loser.

Unionists have nothing to fear.