You are at:Home»News & Current Affairs»Opinion»I want to ride my bicycle
Social share: 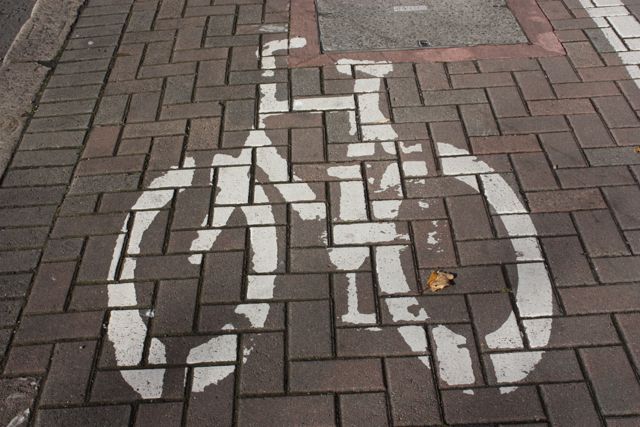 If you live or work in the city of Belfast, you may have noticed the green-painted safe havens for cyclists that have begun to appear at traffic lights. Or you may not, since usually they are obscured by stationary cars whose drivers don’t appear to notice them either. But being denied the one place at a junction that you don’t run a mortal risk of either asphyxiation, or being crushed by an articulated lorry which is turning left but not indicating so, is the least of a cyclist’s worries in the city.

It must be confusing to visitors to discover that unlike most other cities in the Developed World, cycle lanes in Belfast end just where you need them most. You can almost hear the cogs of the city planner’s mental machinery grinding to a halt as he stands at the spot where he instructs the painters to terminate the markings. “It’s going to take money, thought and commitment to find a way to make this bit safe for cyclists. I’m away for a cup of tea. I’m in a Russian submarine underneath the Arctic Circle if anyone is looking for me.”

I do wonder if some of the signage used could also be confusing for visitors. For instance, if you are lucky enough to see the white bicycles painted on the tarmac of Springfield Road All-Day Linear Car Park, it would be an understandable mistake to suppose it was a cycle lane.

But it’s not all bad. It really isn’t. A few weeks back, after heading through Belfast city centre in the early morning, I was dismayed to discover that my bag had fallen off the pannier rack of my bike. I headed back towards town, vainly scanning the gutter with a sick feeling in my stomach (and not just because my lunch was in my bag – it contained a couple of items even more valuable than that). Of all the ancient enmities of the animal kingdom – cat and dog, snake and mongoose, baby elephant and crocodile – it is perhaps bus driver and cyclist that is the bitterest battle of all. Imagine my surprise, therefore, when a bus driver pulled over and said, “looking for yer bag, mate? The council street sweeper lifted it in Castle Street”. Am I glad that we have that sort of bus driver in Belfast and not this sort: http://www.bbc.co.uk/news/uk-england-bristol-17063165

Of course, the Nor’n Ir’n solution to bitter enmity is state-funded separation, and the construction of cycle paths throughout the north is doing much for the prospects of cyclists living to see their grandchildren. Belfast Lord Mayor Niall Ó Donnghaile has recently announced a new cycle route which will enable the citizens of East Belfast to reach Titanic Quarter without competing for road space with two-ton steel projectiles. Good for you, Niall, the citizens of East Belfast (of whom I am one) are doing very nicely for cycle routes – any chance of something in the West or North of the city? From disaffected youths looking an alternative target for missile practice now that Ireland’s call to recreational rioting is muted, to broken glass, to drivers who act like it’s the Dublin free-for-all, to death drivers, to ferocious animals that should be on a lead, to dogs that should be on a lead too – it doesn’t make for happy cycling in some quarters of the city.

You would like to think that former Lord Mayor Tom Hartley, a regular cyclist in the Wild West, would have a word in young Niall’s ear. (In acknowledgement of our new Shared Society, at this point I had hoped to also mention a DUP politician who was a keen cyclist, but when I asked around I was told there aren’t any because Massey-Ferguson don’t make bicycles).

But the greatest peril on the Falls Road is a minority of delinquent Black Taxi drivers. A colleague of mine was nearly sliced in two the other week when a Black Hack that was overtaking him spied a fare on the pavement. It seems the driver didn’t see a precious and vulnerable child of God between him and his next pick-up, he only saw £1.30. My colleague bravely (very bravely) tried to remonstrate with the driver, only to be told it was his fault for existing. The driver indicated the matter was closed by doing the same with his window, and sped off, no doubt to spend the day wrestling with the dilemma of a human life versus five Silk Cut.

Myopic Black Taxi drivers are not the only ones who think cyclists shouldn’t be on the road at all, a sentiment often backed by the argument that “they don’t pay road tax”. Quite apart from the fact that the road tax paid by car drivers doesn’t come anywhere near paying for the roads anyway, just because I ride a bike doesn’t mean I don’t also own and tax a car. If the only exercise you get in a typical week is turning the steering wheel, your health is likely to be a bigger burden on the tax payer than any cyclist’s – you should try taxing your thighs instead.

Social share:
Previous ArticleMallie on Politics (Episode 6): Peter Robinson and ‘The Reptiles’
Next Article How did Scotland’s big fish rise to the top?