You are at:Home»News & Current Affairs»Picture Exclusive – Table talks – first course in a dialogue with ‘dissidents’ – by Brian Rowan
Social share: 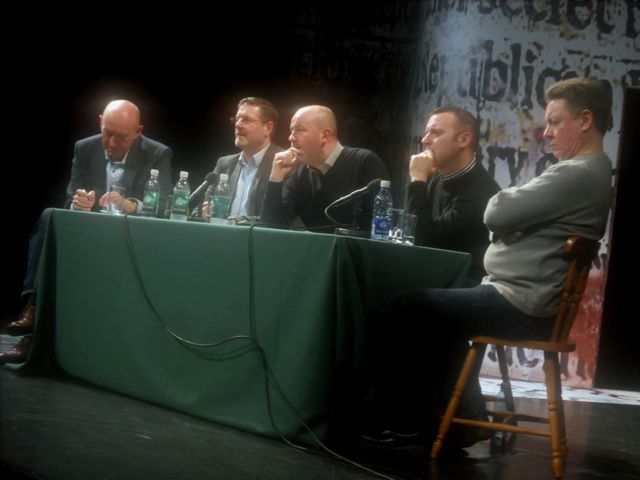 They say a picture speaks a thousand words.

And in this picture those words were sometimes tense, terse, accusatory and angry.

It is what I expected, in a moment that could be the beginning of something.

That is if people make the effort; if they are really serious about a commitment to talking.

This panel discussion, which I chaired, was hosted in the Waterfront Studio on Saturday after a matinee performance of Sam Millar’s play Brothers In Arms.

In it we witness an explosion of rage and guilt and trauma.

It is a stage performance that is a battle between two brothers – one a long-serving former prisoner who feels sold out and sold short by the peace, the other a young Sinn Fein MLA who spent just ten months in jail.

His short prison term is dismissed as “a tea break” – a caustic put down in a script that is not just about a torn family, but a fractured community and movement.

If it were a news assessment on the state of republicanism, I would say it was lopsided – leaning too much towards what we now call the dissident arguments.

But it is not news.

It is theatre – one man’s interpretation and opinion.

And, on Saturday, I told Millar that if his play achieves nothing else, the fact that it has begun a much-needed conversation and a dialogue among republicans, is a significant achievement in itself.

The playwright is a former prisoner and blanketman, and he was part of Saturday’s panel discussion.

Sitting beside him was Ciaran Cunningham of Republican Network for Unity (RNU).

In the way we now describe people, he would be a dissident – a label that neither he nor Millar would use, nor do they like it.

Cunningham served a jail term for intelligence-gathering and, more recently, was arrested at Alliance Party Headquarters during a protest about jail conditions at Maghaberry.

Justice Minister David Ford is the Alliance leader, and the protest was designed to get his attention.

In a recent interview with me, Cunningham said the righteousness of Irish politics cannot always be judged at the ballot box.

And he dismissed as naïve the charge that dissident armed actions amount to killing for the sake of killing.

Murderers kill for the sake of killing, not political activists, he told me.

On Saturday at the Waterfront he talked about revolutionary politics, about six lectures that all members of RNU are taught and about being “demonised” inside the republican community. 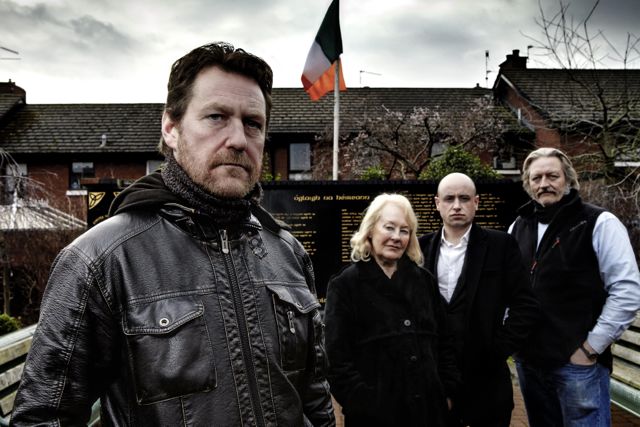 But there was no real answer when I asked what he thought armed dissidents could achieve, that was not achieved by an IRA supplied by Libya.

Indeed there was confusion in the audience about what he wanted, with one woman suggesting he could maybe write a play to explain and express himself more clearly.

Saturday’s event was not a cosy chat.

The one-time senior officer was part of historic talks in Downing Street in 2004 when alongside Sir Hugh Orde he met Gerry Adams and Martin McGuinness.

And commenting after Saturday’s panel discussion, Sheridan said: “My issue is not with the views of people that are different than mine, even when they appear extreme.

“My disagreement with them [dissidents]is the killing of other people to try to achieve their aims.”

On Saturday, Sheridan sat beside Jim McVeigh – a man whose republican journey spans the war and peace.

His story and journey are not reflected in the play.

He described the dissidents as “micro groups” without a strategy and pointed to criminality in that world.

Cunningham responded saying he would not take moralistic lectures on crime.

And from the audience there were questions asking for the evidence that progress was being made on Sinn Fein’s United Ireland project; and a question too about the party becoming another Fianna Fail or SDLP.

The play’s director Martin Lynch told this website: “The Brothers In Arms symposium is without doubt the best symposium Green Shoot Productions has held in relation to one of our theatre productions.

“The lively but honest contributions from our panellists engendered huge discussion and debate among the audience,” he continued.

And he said interest in the discussion was evidenced in the fact “that the vast majority of the matinee audience, who had earlier given the play a standing ovation, stayed behind for the debate”.

Saturday was only a beginning to a dialogue, and it is now up to others to make sure it continues.

There is a huge agenda to discuss – and not just the continuing armed actions.

There is the alleged criminality of some of those at play in that dissident world, and the role of agents.

Republicans also need to change how they talk at each other, the offensive language used by both – dissident and mainstream – to dismiss and demonise the other.

Then there is the issue of ex-prisoners and their needs, and how republicans of all labels and descriptions can help each other.

And there is also the task of making policing better, which includes the challenge of removing the need or excuse for continuing intelligence operations by MI5.

In the Brothers In Arms programme I wrote: “There is nothing wrong with dissent if it is a difference of opinion.

“But there is nothing right about a resort to violence.”

If the talking continues, if it can be expanded to include others, then it may get to a point where people can be persuaded that words speak much louder than bullets.

There were many who dismissed and demonised John Hume when he began his talks with Gerry Adams, but look at what they achieved.

And now the challenge is for republicans to speak to each other – to make that dialogue happen, to come into the same room.

If they are serious, then they need to prove it.

So, let the real talking begin.

Social share:
Previous ArticleThe week in sport
Next Article Knockout blow may not be the only solution