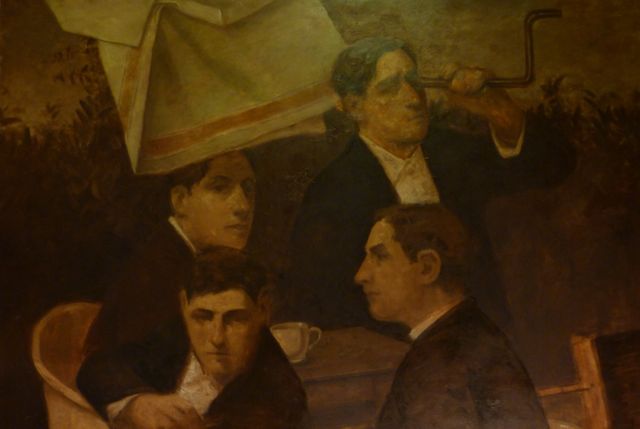 I found myself in an Ulster town a couple of weeks ago. It was a typical Ulster town: slightly old-fashioned in layout and with lots of long-established, family-owned businesses nestling in among some newer brands and high street giants.

It was also a typically Ulster town in the sense that it was an ‘us-and-them’ town. I just knew, from looking at the names on the fronts of the older family businesses and the other services you find in every town, that these shops and businesses served their own communities. In other words, there were doctors, dentists, pubs, newsagents, local papers, undertakers, solicitors, clubs, sports fields, chemists et al who catered primarily—often exclusively—for their ‘own side.’

There were also, of course, the separate churches, Orange and Hibernian halls, schools and housing areas. Indeed, most Ulster towns—reflecting what happens in the cities of Belfast and Londonderry—still have their own clearly defined Protestant/Catholic, Unionist/Nationalist areas.

Almost nothing has changed in these towns since the Belfast Agreement was endorsed at the referendum in 1998: even though the Agreement was supposed to usher in a new era of cross-community cooperation and a genuinely shared future. I would go further and say that in many ways these towns have hardly changed at all since the start of The Troubles at the end of the 1960s. Yes, there are physical and architectural changes, along with changes in housing allocation, equality, machinery of government and political representation; but I don’t really detect much which could be understood as a change in the mindsets of how the communities view each other.

There is peace, albeit in the sense that it is a peace defined purely as an absence of an ongoing terror campaign. But is there peace in the sense that we trust each other and have put the past behind us? Absolutely not! Those who could be bothered to vote are rowing in behind parties which have their roots firmly in the conflict. The existing middle-ground party, Alliance, has made no electoral breakthrough as a consequence of the Agreement. No new, post-conflict party (let alone parties) has emerged. The government is dominated by two parties who have competing and contradictory interpretations of the Agreement and who balance mutual antipathy with mutual veto. The fact that there are more Roman Catholics at Queen’s University and in secondary and grammar schools is deployed as a headline to sell papers and rattle unionists.

So, is this really as good as it gets? Have we endured the terror and instability just to end up more or less where we started? Fair enough, Roman Catholics/Nationalists now have political and socio/economic rights which they say were denied to them when the first Northern Ireland government took office in June 1921, but no-one would seriously contend that relationships between Roman Catholics/Nationalists and Protestant/Unionists are much better now as a consequence.

Politicians and academics like to say that the political institutions are now secure because the DUP and Sinn Fein moved to and conquered the ‘middle ground.’ That is palpable nonsense. Neither the DUP nor Sinn Fein—singly or collectively—is on the middle ground. Instead, they are merely in a sort of no-man’s-land: a place where neither can make a move without the approval of the other and where, consequently, big, era-changing decisions cannot be made because they don’t share a common vision for Northern Ireland and don’t possess a thought-through, joined-up overarching strategy for ensuring that this form of devolution really can make a difference for the better.

The DUP (along with the UUP) regards its primary task as the protection, promotion and preservation of unionist interests. Put bluntly, that means doing everything possible to undermine the republican, united-Ireland agenda. Meanwhile, Sinn Fein (with the SDLP) sees its primary task as continuing to erase, or at least blur, the signs, symbols, touchstones and benchmarks which sharply define Northern Ireland as part of the United Kingdom.

With all of that going on in the background how do the political parties ever get to the point at which they could agree on a shared future? They don’t even agree on the constitutional future of the country they want to share! If a shared future is to have any value, any credibility, then surely it must involve everyone sharing and sharing equally? Yet how do you share and share equally when some parties want a united Ireland and others wish to stay in the United Kingdom? Similarly, since neither side can ever endorse anything which looks as though it diminishes or dilutes its own constitutional policy at the expense of the other side, there can never be an incentive to do anything other than remain in fixed political positions while vetoing Executive policies and legislative proposals you don’t like.

What also strikes me as very odd is the fact that no new political movement or party has emerged since the peace process formally began in the mid-1990s. Given that so many people have stopped voting (and many new-to-the-register voters never actually started) you would have thought that there was an electoral market out there which could be tapped into by some new movement? Yet no new movement has appeared.

Which raises a question: how do you build a new era Northern Ireland in the absence of new era parties and movements? The local Conservatives are busy reconstituting themselves as some sort of ‘new’ vehicle to attract non-voters—yet how do they avoid the reality that they are as much a part of the political/electoral past as the rest of us? Mind you—and this applies to them, too—would it ever be possible to build a new political vehicle which didn’t require the party to have a clear stance on the constitutional issue: ‘ay, there’s the rub.’

Does the fact that we appear as polarised as ever; as tied to the same political parties and causes as ever; and as seemingly reluctant to embrace something politically new, tell us anything? Well, at the very least, it does suggest that the man and woman on the street aren’t particularly hung up on the issue of a shared future. It suggests that they may be happy enough just to rub along in their own separate spaces, content to live and let live so long as the ‘other side’ doesn’t seem to be getting it too much their own way. It suggests that remaining in their ‘us-and-them’ worlds is perfectly ok with them.

Now then, take me as an example. I’m a full-blooded atheist, so I have no hang-ups about the religious beliefs of anyone. I’m a pluralist. I have accepted the need for cross-community power-sharing since the Sunningdale Agreement in 1973. My elder daughter went to an integrated primary school and her grammar school—while not formally integrated—is pretty well mixed. My younger girl will follow the same route.

Yet I live in an area which is overwhelmingly Protestant/Unionist. I could count my Roman Catholic friends on the fingers of one hand. I could count the number of my friends or family in mixed marriages/relationships on the fingers of the other hand. I never ever describe myself as having Irish roots, even though I was born in Northern Ireland. I would never think of myself as a bigot and yet I know that I have ‘red rag’ moments when it comes to the funding of the Irish language in this part of the United Kingdom or Sinn Fein’s ‘Unionist Outreach’ programme. I still get irked when I think of the tens of thousands of Roman Catholics—many of them from professional, educated backgrounds—who switched to Sinn Fein in the late 1990s, when the IRA was still armed and active.

The truth, for me, is that I have no difficulty about living among and mostly socialising with people who share my constitutional beliefs. I feel safer and more relaxed. I don’t have to ‘do’ the nuance and subject avoidance that’s required when I find myself in mixed company—when you can never be entirely certain what phrase or opinion can spark offence.

My gut instinct is that most people, on both sides, are not ready for a shared future—even if they actually knew what the term meant. For so long as Northern Ireland’s politics is dominated by the constitutional question then for so long will people prefer to stick with their own, while remaining civil—if occasionally curt—to their neighbour. It’s not, I accept, an inspiring vision for the future: but it is one of those difficult, unpleasant truths we may all have to face up to fairly soon. One thing is certain, though—trying to legislate us into liking each other or forcing us to share, will only open old wounds and rekindle older angers.