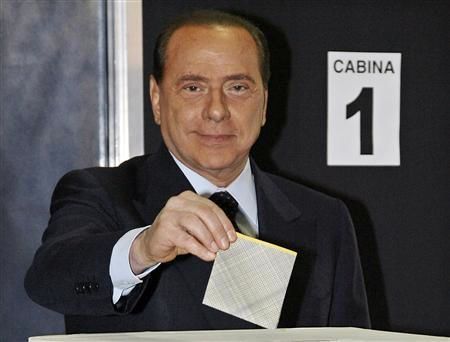 Last night on Question Time there was a fairly typical lament for the Greeks. All the panellists seemed to agree that the suffering of the people in the cradle of democracy was becoming intolerable, and then something quite unusual happened.

Paul Nuttall, UKIP’s MEP for the North West of England, made the point that the Prime Ministers both of Greece and Italy are not elected. “They’ve replaced a democratically elected leader with another Eurocrat who is unelected,” he said of Silvio Berlusconi and Mario Monti.

Immediately Christino Odone, who had just finished describing the humiliation of the Greeks having to endure a puppet Prime Minister, chipped in: “Anybody who replaced Burlesconi is a good thing!” Ed Vaizey MP, and Minister for Culture, Communications, and the Creative Industries, agreed, “There is a perception, actually, that Mario Monti in Italy is doing a very good job.”

“But he’s unelected,” Nuttall protested. Thank goodness Vaizey was drowned out before he finished his next statement which began, “But it is…” Instead Odone declared: “It doesn’t matter! Listen… Berlusconi was a trauma for us, OK. I speak as a half-Italian, he was the worst thing we’ve ever had.”

Perhaps I’m naive to be shocked at the readiness of intelligent and well-educated individuals to throw away any regard for the democratic process. Of course we’re quite used to this cavalier attitude to democracy when dealing with the third world. But Italy is altogether closer to home.

Should we be willing to put up with bad leaders for the sake of democracy? Or is it more important that the trains run on time?

Social share:
Previous ArticleMallie on The Arts from Ross’s: with poet Michael Longley
Next Article Will we ever learn?