You are at:Home»News & Current Affairs»Opinion»‘I am going to lose a button’
Social share: 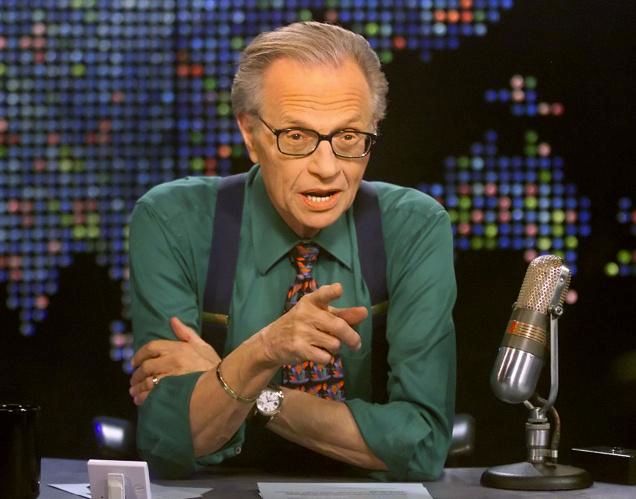 Larry king in his trademark braces

You know there are times that you just cannot  get something out of your head. For over twenty years I have had a love hate relationship with braces. I keep thinking about those braces and they keep reminding me of their presence at very inappropriate moments.

Growing up in the countryside all the older men wore braces. In those days braces were always attached to trousers with buttons. With the changes in fashion clip-ons ended up à la mode.

Working on the farm, in an era when indoor toilets were rare, if you were lucky there was a wee ‘lav’ out the back, but it was not uncommon for young fellows like me to hear an elder declare “I am going to lose a button,” (yes the term used was ‘lose’ a button – that should have been ‘loose’ a button). No one said anything but we all knew what was meant as we watched a man cutting hay, threshing or whatever, heading off across the garden or the field to find a discreet spot behind a tree or a rock for a s…. One did not spot any sign of Andrex Toilet Roll being part of his apparel. Oh no!

Without wishing to be too invasive of your space we all knew a fistful of fresh green grass or more commonly, a dock leaf, a common herb growing wild in country gardens, did the job adequately.

Despite my childhood memories of older men being carried along, supported by those gealasacha (braces in Irish) I grew up with a penchant for wearing them in the face of family opposition who repeatedly charged “you  look like an old man dad.” I persevered.

In essence there was a little eccentricity and desire in me to be alternative in wearing those braces even when I was a slimline Jim.

I have a confession however to make about braces. My affair with them has not been fully consummated. Hold on now — I have no intention of giving up on them, but they do test my patience regularly, particularly at some point when I am becoming animated in my cross-examination of some contrary politician, then suddenly, the croc-teeth on my trousers snap! Compromised yes,  but not a disaster. It could be worse.

Spare a thought for the Sinn Féin President: I recall in the wake of his appearance on ‘Larry King Live’ he emerged to face the assembled press in Washington, a clip board appearing nailed to his crotch. Later I queried the background to this weird accessory to be told “the zip on his trousers literally split wide open as he came through the door on his way out.”  Oops… there goes my croc- clip again!

Social share:
Previous ArticleEamonn McCann on Eamonn McCann
Next Article Have Dawkins and his atheist friends blown it?