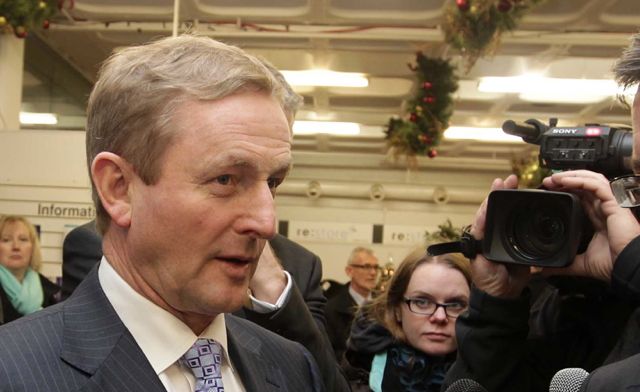 “Let’s save Enda from referenda” is hardly likely to attract those who believe in atomised democracy, who would take every last policy decision back to the polls for determination, or require continuous recall of elected representatives for validation and renewal of mandate.  It might, however, mean something to those who believe in representative government – electing people to do a job and telling them to get on with it.  Despite the banality, it might just represent the subliminal desires, which political correctness prevents their expressing, of the government benches and those opposite who are not merely opportunistic.

It seems to be the season for referendums (without the slogan’s need to rhyme with Enda, the colloquial form is handier) with Martin McGuiness proposing one (sometime) in the North on the question of re-unification, but with no reference to a parallel referendum in the South which would enable the electorate to express acceptance or otherwise of a gift which comes with a €10bn price-tag.  Then there is Alex Salmond’s promise of a referendum on Scottish independence which will cause ripples in the North and create a new dynamic across the islands.

Until the Attorney General has completed her consideration of the text, there can be no certainty of the necessity to hold a referendum on the proposed treaty.  The form of words finally agreed on may be sufficiently imprecise to allow her to advise that a referendum is not a legal imperative notwithstanding previous practice and the strictures of the Crotty judgement.

Incidentally it seems odd that the government should be at pains to assert that Irish negotiators had not been charged to avoid a formulation in the draft treaty which would make a referendum unavoidable.  They would have been severely derelict if they had not done so.

Whatever the advice of the Attorney General and the government decision on it, the issue is likely to end up in the Supreme Court by one route or another, whether by reference by the President or application for judicial review by a latter-day Raymond Crotty.

That may settle the legal question.  There is then the political question – whether pressure of public opinion, the cries of foul from opponents, and the expectation in the electorate over the years that European treaties required determination by referendum produce a demand which politicians will find it impossible to withstand.

It is not being less democratic than advocates for a referendum to argue that the essence of democratic decision, accountability and transparence, can, on occasion, be better achieved by elected representatives properly informed and mandated than by popular, even populist vote.

Neither is it entirely derogatory of democratic values to point out the difficulty of deciding complex and highly technical issues of fiscal policy, economic governance and constitutional propriety by a simple “Yes” or “No”.  Even the title –The Treaty on Stability, Co-ordination and Governance in the Economic and Monetary Union is enough to turn off most voters and to provoke an almost reflexive expression of rejection.

A common feature of referendums in Ireland has been a loss of focus, of the substantive issue being lost in a welter of domestic gripes, the occasion being treated like a bye-election, an opportunity to cane the government for its performance or lack of action.  The vote is more likely to be about unemployment and recession, about septic tanks and hospital closures than the great issues of sovereignty and national survival.

The fact is too that Irish political parties are not very good at managing referendum campaigns, where the battle is to sell ideas rather selling candidates.  It is one thing knocking on doors and asking for a No1 or No2, quite another to have to be faced with a request to explain the intricacies of the balanced budget rule and the penalties for non-compliance.

In any case, there should be no need for a Constitutional amendment to endorse the need for a balanced budget.  Simple good housekeeping requires a state, as much as a household, to live within its income, and that, for Ireland, irrespective of the Treaty, must be the priority – to address the deficit by measures which are entirely within Irish control.

Neither is there much point in getting excited about fiscal independence, which has not existed since Bretton Woods, or economic sovereignty, a figment of the imagination for a small open economy depending on exports in an interdependent and cruel world.

Referendum or not, what is needed is a broad based public debate on Ireland’s relations with Europe and the Euro.  There is no need to be frightened by the idea of a more federal Europe.  Sean Lemass, fifty years ago recognised that joining Europe was the beginning of a journey towards a closer political entity.  The logic of a common currency requires some element of economic and fiscal governance.  If that means a more federal Europe, it would be a better subject for debate than the arid technicalities of a financial treaty.

But it needs an open debate, not propaganda or proselytism, with all sides of the argument allowed their say and the issues, pro and con, teased out as dispassionately as possible.  The Irish people deserve no less than to be treated as adults, to have the issues explained to them, the options and the alternatives costed and argued, and their views and concerns taken into account.

In this crucial issue, above all they are entitled to leadership from the people they have elected to do so.

Dr Maurice Hayes from Killough, Co.Down is one of Ireland's foremost political and social writers, authors and commentators. In a hugely expansive career, previous positions held by Dr Hayes include: Chairman of the Ireland Funds in Ireland, Chairman of the National Forum on Europe, Independent Senator, Seanad Èireann 1997-2007 and Northern Ireland Ombudsman and Boundary Commissioner - to name but a few. Mr Hayes was elected European Person of the Year in 2003.