You are at:Home»News & Current Affairs»Opinion»We actually need to learn how to be as happy as an Amish
Social share:

Rarely does any one issue stay in the headlines for more than a week, let alone months, never mind years. But the news that the global economic system is causing misery for millions of ordinary people all across the planet just won’t go away. What has usually gone unsaid, however, is that economic misery for millions has in fact been the case since history began: the difference now is that the millions affected are you and me, and we can vote. 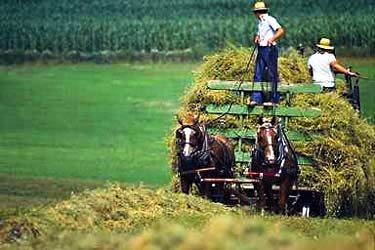 Capitalism was morally and conceptually bankrupt long before it teetered on the brink of financial meltdown. I think it is beyond challenge that any system in which the top three richest people in the world hold assets worth more than the combined GNP of all 48 least developed countries is ethically insolvent; and although perpetually increasing prosperity for all is a myth that has been bought into by those benefitting from it for about half a century, the truth is we would already need the resources of three Planet Earths in order for all of its seven billion inhabitants to enjoy the lifestyle of a typical Eurozone consumer (and a fourth, uninhabited, planet to dump the waste on).

So whilst politicians apply repeated economic kickstarts via the bail-out defibrillator, do we stand at the bedside of the global economy offering prayers that it will pull through, or do we admit to ourselves that the efforts of politicians are merely a stalling tactic to temporarily alleviate the symptoms of a terminally sick system, and start to plan for life after prosperity?

I’ve yet to hear a reason why we should trust the people sticking multi-billion-pound elastoplasts on the gaping wounds in the planetary economy – do they really know what they’re doing? (You bet they do, they just aren’t telling you what they know). No politician is likely to be re-elected by giving an honest answer to the question of how to clear up the mess created by hundreds of millions of people – either individually or as nations – being allowed to borrow more money than they can ever afford to pay back.

If you imagine a spectrum from pharmacist to drug dealer, bankers appear to have been sliding towards the latter end of the scale in their efforts to maintain the profitability of dispensing their powerful narcotic. The new rules proposed by the FSA to redress this are so selfevident to the rest of us that they only serve to confirm that the regulator has been asleep at the wheel for the past ten years.

It’s easy to join the crowd on the terraces chanting “Fred the Shred, what a banker, what a banker”, but Sir Fred the Uneponymous only hastened the inevitable. The panEuropean veneer of prosperity has been living on borrowed money and borrowed time for decades, and both have just run out.

The lack of will to address the deeper problems in the monetary system doesn’t augur well for the future economic prospects of “developed” countries; and these prospects aren’t likely to improve with time as their population dwindles and ages whilst elsewhere in the world developing countries are teeming with young people desperately keen to work, even if they’re only paid buttons.

Reputedly it was Voltaire that said, “God is always on the side of the big battalions”. Who’s to say what is true of God, but Voltaire’s observation is almost certainly true of economics. By 2050 Germany will be the only EU country that scrapes into the world top-25 populations unless Turkey has been admitted to the EU by then (if there’s still an EU to be admitted to). China and India will both have larger populations than the entire EU (even in the unlikely event that Turkey and the UK are both in it).

In the light of that, I’ve come to the point where I simply don’t trust a government that puts out a message, “there are difficult times ahead, but with sufficient resolve and sacrifice, it will all be over soon enough and we can get the economy growing again”. The truth is that things will probably never be the same again, ever – but no government is brave enough to admit it. The charade of increasing prosperity has been exposed as a fabrication maintained by unsustainable borrowing. Prosperity can’t increase for everyone – at least not until we figure out how to teleport rice grown on Venus and oil drilled on Mars.

Fed up of listening to spin, I would vote for a party that tells me something more realistic, even if it sounds likely to be less pleasant – but I don’t expect to be offered the option. Across the water it used to be the case that your vote meant something – a vote for Labour meant solidarity with other workers, and you expected to pay for a fairer society. If on the other hand you were doing rather nicely and wanted to keep things that way, you voted Conservatory (and then built yourself one). You didn’t worry if the economic system meant that other people were getting screwed left, far left and centre.

In various parts of the developed world, as society has progressed, we’ve seen feudalism, fascism, federalism, (and under the previous Tory government, we even flirted with fetishism). Before long instead of our skiing holidays and our 4x4s, we’ll be only too happy to vote for fair-day’s-work-for-a-fair-day’s-payism. But I’m not sure there’s going to be any f-ing choice of any sort.

Anyone who is anything other than filthy rich is going to have to modify their material aspirations – the choice we have is whether to do it now when we can at least decide for ourselves to do so (and tell ourselves we’re taking an ethical stand we’ve been pondering for some time). They say the best things in life are free – it’s time to make a list. We have to keep spending, but spending what we have and not what we wish we had. We actually need to learn how to be as happy as an Amish.