You are at:Home»News & Current Affairs»Opinion»Scots-Irish identity being erased in America
Social share: 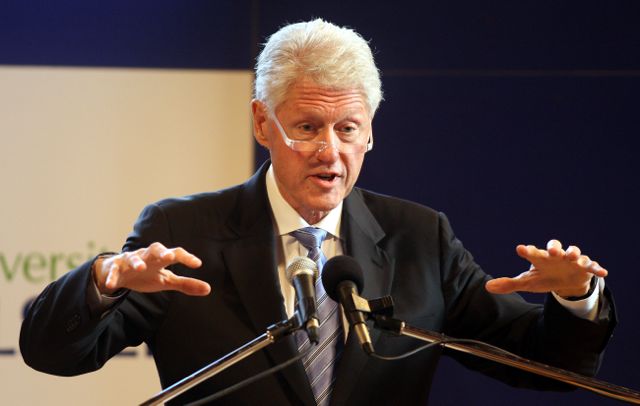 Who knows why the U.S. Census Bureau has decided not to include Scots-Irish as a distinct ancestry category on the American Community Survey? Bureaucracy is boring, demography is pretty dry as well, and if I can’t decipher the intentions of pen-wielding civil servants in my own country, I’m definitely not going to succeed in foreign jurisdictions.

I think the decision is a bad one, but I hope nobody kicks up too much of a fuss.

Firstly, the decision is wrong because of the undeniable contributions made by immigrants from Ulster to the United States: on no less than three occasions was the world’s greatest democracy governed by men whose fathers were born and raised in places we would describe as ‘down the road there’. The Declaration of Independence was printed by John Dunlap, formerly of Strabane – indeed the house where Dunlap lived was visited by Bill Clinton (pictured above), also of Scots-Irish extraction.

Describing this group of people as Irish is not wrong, but the term Scots-Irish is useful to distinguish between these people and the large numbers of Catholic Irish who arrived in America at a later stage in its history. The contributions of both diasporas to American history are substantial, but different.

Whether a distinct Scots-Irish culture can still be said to exist in the United States is up for debate, and this brings me to my second point. Many would argue that the Scots-Irish embodied the attitudes which went on to define the United States: individualism, free enterprise, and antipathy towards government.

According to Billy Kennedy, editor of the Ulster Scot newspaper and author of a number of books on the Ulster migration to America: “The Scots-Irish on the eighteenth century American frontier were a tough uncompromising breed of people, many of whom were in the vanguard of American independence… their stand for faith and freedom was instrumental in creating what today is known in middle society in the United States as the American psyche.”

If the footprint of the Scots-Irish in America seems invisible, it’s because it’s huge and you’re standing right in the middle of it.

Surely such a robust, stoical and successful people, who endured a harsh living in the Appalachian Mountains before conquering the American frontier, couldn’t care less whether their ancestry is adequately represented by a census form?

In his book on the Scots-Irish Born Fighting U.S. Senator Jim Webb says the following: “In there insistent individualism they [the Scots-Irish]are not likely to put an ethnic label on themselves when they debate societal issues. Some of them don’t even know their ethnic label, and some who do know don’t particularly care. They don’t go for group-identity politics any more than they like to join a union.

“Two hundred years ago the mountains built a fierce and uncomplaining self-reliance into an already hardened people. To them, joining a group and putting themselves at the mercy of someone else’s collectivist judgement makes about as much sense as letting the government take their guns.”

The removal of Scots-Irish from the American Community Survey represents a giant mouse-trap for those in the U.S. who take pride in their Ulster heritage – bite the bait and throw a tantrum over it, and the identity of that hardy people will surely be dead.