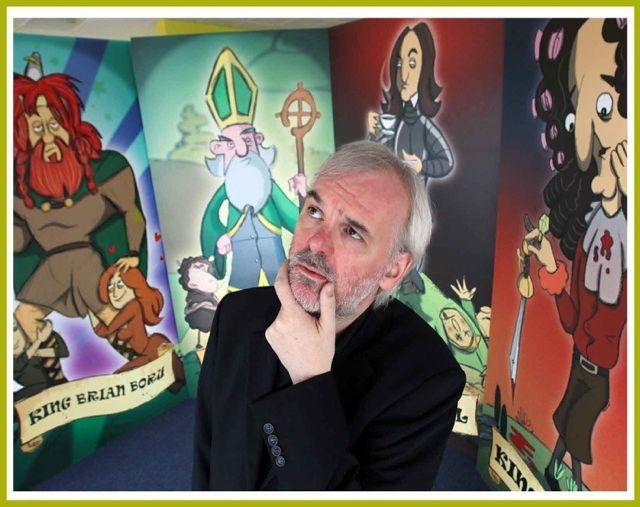 Last Thursday I was at the superbly eclectic Out to Lunch festival at the Black Box.  The festival runs all month, boasts a wide selection of drama music and comedy and is perfect for cheapskates like me. Eight quid bought me lunch, four excellent musicians, original music and an Oscar nominated actor reading an enthralling version of Flann O’Brien’s The Third Policeman.

Stephen Rea’s mellifluous tones, cellos, a violin and piano, and a surreal tale of murder, bad teeth and bicycles that listen in to your conversation…where else would you get it?

The Third Policeman show was clever, witty and thought provoking. And it only cost me eight quid.

Twenty two quid is the price of the cheapest ticket to see Mrs Brown’s Boys in the Odyssey Arena in December. £43-50 gets you “up close and personal”. The show which stars cross dressing Dublin comedian Brendan O’Carroll was the comedy phenomenon of 2011. He’s had the sort of success that makes other comedians invest in voodoo dolls.

Mrs Brown’s Boys has recorded its second BBC 1 network series and has been commissioned for a third. The DVDs are everywhere. The stage version is touring the UK. Recently O’Carroll completed a week of shows in Belfast’s biggest venue. He’s coming back in December, has already added extra shows and is selling tickets faster than Alastair McDonnell can lose voters. A BAFTA beckons.

The show appeared to come from nowhere and has effortlessly leapt in to the public psyche. In fact O’Carroll has been performing the character Mrs Brown for many years in Dublin theatres.

Now it is everywhere. People have been stopping me in the street to ask me what I think of Mrs Brown’s Boys. Usually they help me to temper my response by immediately adding their own opinion that “it’s fecking brilliant”…or, more rarely, that it is the most embarrassingly bad comedy ever to disgrace TV.

Mrs Browns Boys divides opinions the way Marmite, or the Orange Order do.

Most TV critics hate Mrs Brown’s Boys. They write about it in the same way tabloids write about paedophiles. They have deemed it crude and crass and witless; I suspect that part of their objection is that Dublin working class humour has been elevated from Irish theatres to sit merrily centre stage on the biggest platform the BBC has to offer and that’s just not…well…British.

I don’t like TV critics. Or rather they don’t like me. The sitcom I co-wrote and appeared in, Give My Head Peace, was hugely popular with the Northern Ireland public but generally lambasted and despised by the critics.

Give My Head Peace is similar to Mrs Brown’s Boys in that it was an unashamedly broad based studio sitcom.  It is dissimilar in that we never made the leap from local hit to national TV and thus to millionaire stardom.

I’m delighted to see critics ignored and defied by the public but which comedian wouldn’t cry himself to sleep with jealousy at O’Carroll’s incredible success?

Does he deserve it? Yes. There can be a certain snobbishness among comedy practitioners but I respect anyone who can make a roomful of strangers laugh and O’Carroll is making millions of people across the UK laugh. 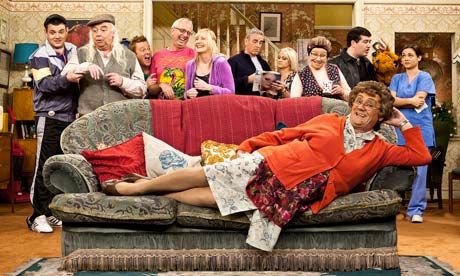 Is Mrs Brown’s Boys any good?

Mrs Brown’s Boys makes Give My Head Peace look like Ibsen. The plots and jokes are ancient or if not ancient then certainly Joycean – if there was any copyright on them it has expired.

O’Carroll’s use of the f word is gratuitous and his characters struggle to make it to two dimensions. And yet the show has something of which most comedians can only dream. It has comedy X factor. It has warmth. It has a sense of pure unadulterated fun, a sense of fun that is missing from a lot of Gervais era comedy. It has connected with its audience in a way that is very rare.

The godfather of modern stand-up Lennie Bruce famously said the audience is a genius. The audience decides what’s funny. Not the critics, not the television executives, not even the performer. Well O’Carroll’s audience has decided.

Having struggled in the Kafkaesque world of BBC decision making, I found the decision by BBC network to pick up Mrs Browns Boys to be astonishing and brave and completely at odds with everything they have ever done previously.

And it’s paid off spectacularly for them and for Brendan.

There is no mistaking the genuine and enormous affection vast numbers of viewers have for the show. Why? I think it is because it is unpretentious. It is honest. It is not knowingly clever, ironic or cynical or patronizing; all it tries to do is make you laugh. If you don’t like it you can feck off and watch something else. If you do like it you tend to love it.

So is Mrs Brown’s Boys funny? Well its not clever or thought provoking but yes it can be laugh out loud funny. So I wish O’Carroll all the best…the jammy bastard.

No really. I hope the show continues to outrage po-faced critics as much as it delights its fans. But I won’t be paying £43- 50 to get up close and personal this December. There’s lots and lots of better stuff out there. Look at the Out to Lunch programme, go and see Stewart Lee in March and if you want a local cheaper version of Mrs Brown why not come to the Give My Head Peace live tour in April and May?

Tim McGarry is a former lawyer, (but please don’t hold that against him) an experienced actor, writer, stand-up comedian and broadcaster who has worked extensively on television, radio and stage. He is probably most renowned for playing the part of Sinn Fein stalwart Da in 73 episodes of the hugely popular sitcom Give My Head Peace which ran for ten years and was Northern Ireland’s most popular TV show. Tim has also performed a huge number of different roles (both male and female!) in the BBC NI television sketch show Dry Your Eyes. He was the host on the Radio Ulster and BBC1 NI television comedy panel show, The Blame Game. Tim writes and performs the weekly topical “taxi-driver” piece for BBCNI’s popular current affairs TV show Hearts and Minds. Tim has wide experience as a stand up, solo performer, presenter and after dinner speaker. His one man stand- up show “Tim McGarry’s Irish History Lesson” got a 5 star review in the Belfast Telegraph and toured the entire province to standing ovations.