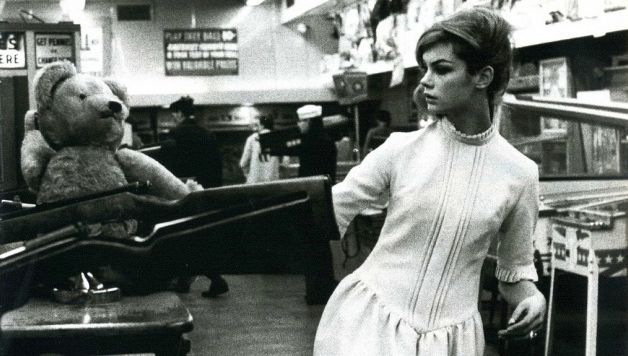 Shrimpton in New York in 1962, image by David Bailey

Armed with just a camera and an old teddy-bear, David Bailey and 19-year-old Jean Shrimpton left for New York. Against the cold cityscape the photographer shot his model, and lover, for a Vogue spread entitled ‘Young Idea Goes West’. They almost didn’t make it; just before their flight from Heathrow, Bailey had to drag Shrimpton aboard. “Come on Jean” he said, “it’s like a 29 bus with wings.”

But they did get there and spent a week capturing the eruption of the city’s so-called youth-quake. Draped upon the urban Manhattan underbelly and clutching her teddy-bear, Jean Shrimpton blended demure fashion into gritty street photography. This photo-shoot redefined fashion editorials. Shrimpton and Bailey arrived there as unknowns, but when the spread was published in April 1962, their partnership conceived swinging London and gave birth to a youth culture.

This was the world’s first real look at Jean Shrimpton. She appeared child-like in the photos but when you caught her face it was entrancing; your eyes couldn’t leave it. Her beauty was timeless even then. A gamine silhouette and willowy limbs made her seem ethereal and move weightlessly. Then there were the doe-eyes, arched eyebrows and alluring pout underneath a fringe that framed her delicate face.

During the Melbourne cup in 1965, Shrimpton attended the Victoria Derby Race wearing a white Colin Rolfe shift dress, and nothing else. The hemline skimmed her thigh and billowed ever so slightly on her waifish frame. In that instant, she became a fashion icon, adopting an emblematic style that is easily accessible and still coveted today.

For those who missed it first time around, Jean’s influence is set to be revived for modern interpretation when the BBC4 drama, We’ll Take Manhattan, is released on January 26. Karen Gillan plays the supermodel, exploring that notorious week in New York when she and David Bailey first began their four year love affair.

In a preview clip, Gillan wears a long beige suede coat, oversized sunglasses and a floral head-scarf to recreate the classic shots. The actress is beautiful, she embodies the era but she lacks Jean’s ease.

Jean always claimed that she never liked being photographed; she was just good at it. “She was magic.” said David Bailey. “In a way she was the cheapest model in the world – you only needed to shoot half a roll of film and then you had it.”

Now Shrimpton has escaped fame to live the isolated life she longed for. When told about We’ll Take Manhattan, she bluntly responded “It’s of no bother.”  Searching for images of her, you get trapped in the 1960s. All of the pictures capture a young pouting girl, round-eyed and hypnotising. Jean Shrimpton, the model, never left that era. And she won’t be photographed again.

Social share:
Previous ArticleBroken marriages and “intimate strangers”
Next Article One chat with O2 is one chat too many…