You are at:Home»News & Current Affairs»Opinion»‘Adoration of the Maggie’
Social share: 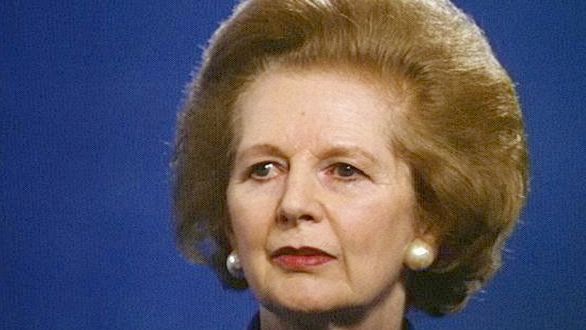 A few years ago I was on a tour bus in London, enjoying the sheer enthusiasm and eloquence of a ferociously well-informed guide. He pointed to a fairly swanky mansion with a group of clearly armed policemen on the doorstep and a security barrier at the gateway. “That’s where Mrs. Thatcher lives,” he told us. “The armed guards are there to make sure that she doesn’t get out and get back to Downing Street again!” It was a lovely, perfectly delivered joke and, even after translation, left the tourists chuckling.

I was reminded of that joke again by the opening scene of The Iron Lady, when Mrs. Thatcher (brilliantly played by Meryl Streep) has ‘escaped’ her minders and is wandering around her local shops—alone, dishevelled and unrecognised. She had, quite literally, been stripped of power—political, personal, psychological and mental—and reduced to little more than the Conservative Party’s equivalent of Miss Havisham. Yet for all the political inaccuracies, inventions and assorted irritants of the film, Thatcher still emerges as a genuinely remarkable person.

Now then, to paraphrase Dr. John Watson from ‘A Scandal In Bohemia’: “To Alex. Kane she is always THE woman. In his eyes she eclipses and predominates the whole of her sex. It was not that he felt any emotion akin to love for Margaret Thatcher, yet for him she is and always will be THE woman.”

It’s actually almost forty years since I first heard Thatcher being interviewed. It was early January 1975 and she, along with Hugh Fraser, was challenging Edward Heath for the leadership of the Conservative Party. She was devastating. Okay, her voice may still have been quite shrill and she still had a tendency to harangue rather than converse, but what shone through the interview was a politician with passion, conviction and vision. Gone was the crumpled, concessionary language of Heath Conservatism and, in its place, was the language of a politician who believed that the job of a leader was to lead!

In the first round she beat Heath by 130 to 119, with Fraser trailing way behind with 16. But with just less than 50% of the vote a second round was required. At that point all the political chickens (William Whitelaw, Geoffrey Howe, Jim Prior and John Peyton) who hadn’t had the courage to challenge Heath threw their hats into the ring. The media consensus at the time was that Thatcher had served her purpose as the giant killer and that one of the others—probably Whitelaw—would take the reins of power and allow the party to trundle on much as before.

But in the week between the first and second rounds Thatcher showed exactly what she was made of. She refused to play by the gentleman’s club rules and fought tooth and nail for every vote. Her media performances improved and, unlike the others, she had a very clear, well-defined agenda for the way ahead. Being a woman helped her enormously, because it guaranteed massive extra publicity and defined a very specific demographic which she, and only she, could credibly appeal to. The fact that the other candidates looked and sounded like ‘old women’ also played to her advantage: as one commentator put it, “she’s the only real man in the field.”

So, on February 11, 1975, she became leader of the Conservative Party. In a world of grey men and grey politics she was a bolt of electric blue. She didn’t ‘do’ nuance. She had no interest in appealing to a mythical centre ground. She had no interest in sweeping ideology under the carpet and watering down the traditional roots and values of Conservatism. “If you believe something to be wrong, your duty is to change it and remove it. You do not compromise with something which is damaging your country. I was elected to change this country, not to compromise with those who believe that their power base is more important than the sovereignty of Parliament and the voice of the people at the ballot box.”

Can you imagine John Major or David Cameron saying something like that? Or Tony Blair, Gordon Brown or Ed Milliband? That’s the difference between leadership and mere management. It’s the difference between a politician who wants to do something and a politician who wants to be someone. Thatcher had no interest in focus groups, instant opinion polls or a consensus derived from both seeing and accommodating the other man’s point of view. At one point in The Iron Lady she says, “what kind of leader am I if I can’t get my own way and do what I know to be right?”

I guess she didn’t have much time for the primus inter pares approach to either the Cabinet or individual ministers. SHE was leader. SHE was Prime Minister. SHE would give the final seal of approval to policy. After all, it would be SHE who would be the determining factor on election day! It was a style of leadership that the House of Commons hadn’t seen in living memory and it was a style of leadership that shook her political opponents (inside and outside Parliament) to their very core. It was, of course, a style of leadership which divided opinion. No-one was neutral on Thatcher. You either loved her or loathed her. You were either ‘wet’ or ‘dry.’ Thatcher was never a politician you shrugged your shoulders about.

Some may argue that the same could be said of Tony Blair. I don’t think so. From February 1975 people became and remained interested in Thatcher. Even today, twenty-two years since she left Downing Street, they are still interested in her. She made a difference. She shaped an era. She changed the face of politics. She has become a legend. She was never boring and never afraid to run with her own instinct. What I think Blair will be remembered for—and it won’t be for much else—is that he helped to kill off ideology in mainstream British politics. His personal beliefs didn’t extend much beyond populist platitude, photo-opportunities, quick-fix policy and the dot-to-dot rhetoric of the fairground barker. His was the “OK,” “Hello” approach to politics, where celebrity and cliché triumphed over conviction on every occasion.

That’s not to say that Thatcher didn’t make huge mistakes, of course she did. The real test of a leader, though, the test that separates a leader from a manager, is the willingness to take brutal, unpleasant, unpopular decisions because you believe that they are the right decisions to make in the circumstances. Change rarely happens in politics, because most politicians are afraid to take the toughest decisions. They water down, they seek consensus, they chase focus group approval, they court self-interested media figures, they stick a finger in the wind and they lose themselves in the Wilkins Micawber delusion that “something will turn up.” Blair, Cameron and Obama disappoint because they always find the excuse for not doing what they know really needs to be done. Indeed, it’s that tendency to avoid the difficult decision which partially justifies Enoch Powell’s dictum that most political careers end in failure.

Will history be kind to her? To be honest, who cares? As long as people write about politics, talk about politics, research politics and lecture about politics then for so long will she be written about, talked about, researched and lectured on. She made politics interesting. She made political debate interesting. Go on, look around you, can you think of even one politician across the United Kingdom who is genuinely interesting? Can you think of one who makes you sit up and take notice? History remembers those who made a difference and SHE made a difference. It’s still not the same without her!