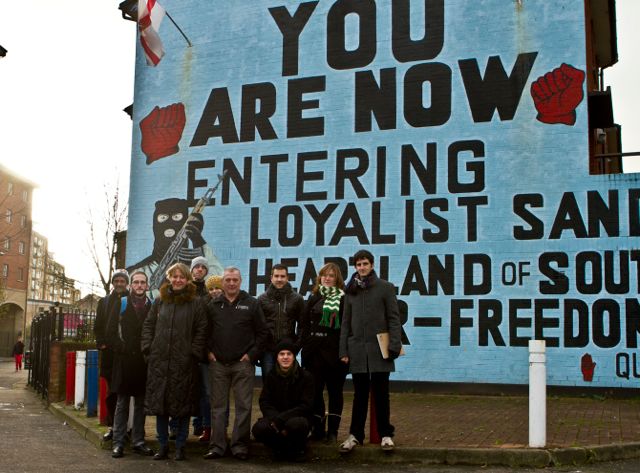 The questions in the conversation were familiar; the same ones we needed answered not that long ago.

But this time they were being asked by a visiting Basque delegation, in Belfast for several days last week.

They arrived after recent significant developments.

And, within days of that, the ETA announcement of a definitive cessation of its armed activity, and new hope that a violent conflict stretching across half a century is now over.

The conference had called for that public declaration, and:

“It was impossible for ETA to say no,” Paul Rios of the project Lokarri said during his Belfast visit.

His group is a social organisation committed to non-violence, and the defence of life and human rights as ethical absolutes.

Lokarri has also been working with the South African lawyer Brian Currin, known to the Northern Ireland peace process for his roles in the parades issue and with the Sentence Review Commission – established to deal with the prisoner releases after the Good Friday Agreement.

And, after those recent significant developments in the Basque country, the Belfast visit was under the theme: Building Reconciliation Bridges.

It was about listening and learning.

At Stormont they met the Speaker and the political parties.

Then there were meetings with the projects Healing Through Remembering and Relatives for Justice.

They talked with the Human Rights Commissioner Alan McBride, who lost his wife and father-in-law in the IRA Shankill bomb in 1993.

Met the Belfast Lord Mayor Niall O Donnghaile in a week of controversy news and headlines for him over his refusal to present a young Army Cadet with an award.

And, there were conversations with youth representatives from Alliance and the SDLP as well as a visit to the Corrymeela peace centre.

On Saturday I was part of a group of journalists and loyalists who met the delegation.

Sinn Fein Councillor Caoimhin Mac Giolla Mhin and the former Methodist President Harold Good, both of whom have a special interest in the Basque process, were also present.

The meeting was arranged and chaired by Ruairi Rowan, and hosted by Peter Sheridan, the former senior police officer and now Chief Executive of Co-operation Ireland. 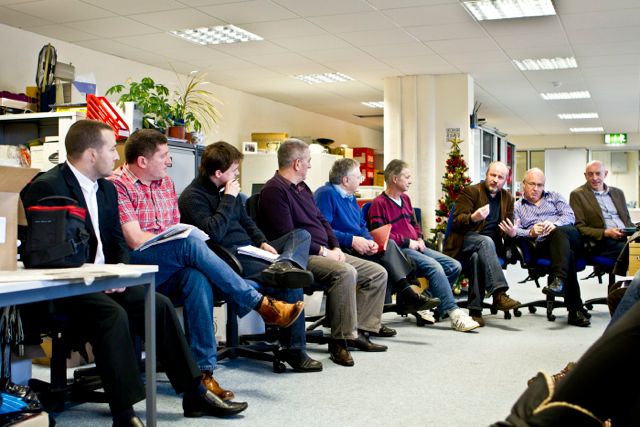 And, it was in this setting (above), over a couple of hours, that we discussed with the delegation many familiar topics and problems.

“The first thing it showed me was how much we had matured – that people can have these conversations,” Sheridan said afterwards.

But what is in it for the visiting delegation?

“The danger of making many of the mistakes that we made can be avoided by listening to groups like Saturday’s,” Sheridan responded.

In the final declaration to emerge from the San Sebastian Conference, the question of dialogue was addressed:

“We suggest that non-violent actors and political representatives meet and discuss political and other related issues, in consultation with the citizenry, that could contribute to a new era without conflict.

“In our experience third party observers or facilitators help such dialogue.

“Here, such dialogue could also be assisted by international facilitators, if that were desired by those involved,” the declaration read.

But William Smith, who chaired the 1994 loyalist ceasefire news conference, and who was a visitor with other ex-prisoners to the Basque country two years later, offered a word of caution:

“The danger in using intermediaries is that it gives people the excuse not to talk directly,” he said.

In Saturday’s meeting, the complex issue of apology was part of the discussion.

It was a wide-ranging conversation that also focused on demands made by politicians and government, including that ETA disband.

Then there were thoughts about prisoners, media reporting of conflict and the importance of dialogue.

Soon Harold Good, a witness to the IRA’s decommissioning, will travel again to the Basque country – this time for a conference on victims.

The veteran journalist Eamonn Mallie – who has covered Northern Ireland’s war and peace – stressed the importance of stepping outside absolute positions and the need to be careful with language.

We were able to describe some of the demands made here – that the IRA wear sackcloth and ashes, that decommissioning should be photographed, that the Army Council should publicly disband.

Demands that were not met and yet the process here survived.

Caoimhim Mac Giolla Mhin spoke of the importance of patience, allowing time and staying united in pursuit of goals.

He thinks things could move quickly after the recent peace conference and the ETA declaration.

And the loyalists John Howcroft, Jackie McDonald and ‘Plum’ Smith focused on the importance of community development.

“They need to develop at a community level,” Smith said

“You can’t leave this process to big ‘P’ politics.

“You need to develop with people on the ground,” he said.

And Harold Good and the BBC journalist Mervyn Jess both made the point that the people are often ahead of the politicians and their demands.

That the end of violence, being able to live in peace, are the things that really matter and that can create momentum.

Paul Rios said they wanted to learn about the idea of compromise, dialogue and trying to break that image of the enemy.

And, on Saturday, they saw one-time enemies sit in the same room – and debate and argue over difficult issues.

“The process in Northern Ireland encourages us to say: We can do that.”

Social share:
Previous ArticlePop-up gallery brightens up Belfast’s Lisburn Road…Listen to the man behind the colour – Mr Joe Brennan
Next Article Your Human Rights are safe with Santa – by David Maley