You are at:Home»News & Current Affairs»Opinion»Western protestors cannot bask in the sunlight of the Arab Spring
Social share: 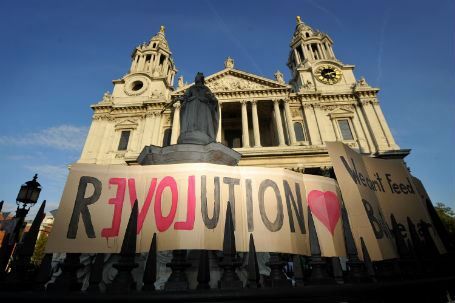 History is not written by historians, history is written by journalists. When historians want to find out what happened at a given time, at a given place, much of their source material will be the newspapers, magazine articles and press bulletins put together by underpaid hacks on an imminent deadline, seeking to explain in just a few hundred words events of unassailable complexity.

Filtering the truth from this enormous collage of incomplete and prejudiced documents can be an impossible task. It is easier to construct a narrative and then cherry pick the evidence you need to support it; I have never met a journalist or an historian who would deny this.

Already, we journalists have begun the construction of the myth of 2011. We have gathered our case studies, we have put pins in the map to demonstrate where they occurred, and we have drawn threads from one pin to another, from continent to continent, to prove that this was the year in which the young people of the world woke up to the corruption and ineptitude of their rulers.

The sentiment was well-expressed by Benjamin Zephaniah in an episode of Question Time at the peak of the furore over the Occupy protests at St. Paul’s Cathedral. “There are people all over the world,” he said, “rising up against their rulers in different ways, and these people [at St. Paul’s]have said that they are sick of political corruption, they’re sick of politicians doing favours for big business.”

The implicit suggestion from Mr Zephaniah was that the Occupy protestors in London are part of the same campaign for basic freedoms and rights for which protestors in the Middle-East fought and died.

There is an agenda in this conflation – and the key word in this agenda is validity. By lumping protests in the West together with the protests of the Arab Spring (which we do not really understand but which seem to us to be justified because we know how cruelly some Middle-Eastern dictators maintained their power), we are appropriating the validity of the latter on behalf of the former. Western protestors are trying to bask in the sunlight of the Arab Spring.

There have been several more sophisticated attempts to retrospectively unite the disparate outbursts of discontent around the world this year. The Guardian journalist, Jack Shenker, wrote just after the London riots came to an end that:

“Of all the millions of words expended in the global media on this year’s rash of youth-led revolts across the globe, none are more relevant than those penned by Alex Andreou, a Greek-born blogger who now lives in Britain. ‘You have run out of ideas,’ he wrote in June…From Arab autocrats to eurozone finance ministers, paucity of original thought has prevailed at the top and the prescription has always been more of the same: reheated rhetoric and stencil-cut solutions, all worn lifeless with weary familiarity. Little wonder then that from Santiago to Sana’a, something else has arisen to fill the void – and that those still rooted in the old models of thinking find themselves lacking the linguistic tools necessary to even describe the phenomenon, never mind understand it.”

In this analysis, the protests around the globe are united because of their determination to articulate a new vision: “They are bound together by a common sense of disenfranchisement and the belief that the participants have it in them to create a new reality.”

Mr Zephaniah went some way towards articulating this new reality on Question Time: “Even if you want capitalism, why can’t we create a new capitalism that puts people first? When banks have problems, we… what do they call it?… recapitalise the banks; why don’t we recapitalise people? We don’t care about people.” Problem solved.

The most determined effort to reconcile the irreconcilable remonstrations around the world came in the form of Time magazine’s Person of the Year: The Protestor. In this trenchant piece Kurt Andersen tells us that:

“In Sidi Bouzid and Tunis, in Alexandria and Cairo; in Arab cities and towns across the 6,000 miles from the Persian Gulf to the Atlantic Ocean; in Madrid and Athens and London and Tel Aviv; in Mexico and India and Chile, where citizens mobilized against crime and corruption; in New York and Moscow and dozens of other U.S. and Russian cities, the loathing and anger at governments and their cronies became uncontainable and fed on itself.”

One would think to read this piece that the governments of each country were brothers sent from one and the same institution to rule the distant lands of Planet Earth. Andersen even revives Eisenhower’s Domino Theory to explain how Occupy Oakland protestors are the descendents of those who brought down President Mubarak of Egypt.

In fairness to Mr Shenker and Mr Andersen, both make certain exceptions in their arguments.  “It’s easy to overstate the linkages,” writes Shenker, “those joining the anti-government uprising in the Syrian town of Hama and los indignados of Barcelona and Madrid are striving to confront very different enemies and are facing wildly dissimilar levels of repression as a result.”

According to Andersen, “The stakes are very different in different places. In North America and most of Europe, there are no dictators, and dissidents don’t get tortured. Any day that Tunisians, Egyptians or Syrians occupy streets and squares, they know that some of them might be beaten or shot, not just pepper-sprayed or flex-cuffed.”

Yet even these caveats don’t do justice to the extent to which the protests around the world differ. The acknowledgement that protestors in New York and London do not face torture and execution is so obvious that it has become a red herring; it distracts us from the fact that they are protesting for entirely different reasons, and that the protests arose out of completely different circumstances.

In Greece protestors have baulked at the rigid austerity measures imposed by the EU-IMF. The dominance of Germany in negotiations over Greece’s future has given the protests a distinctly anti-German flavour, hence the appearance of posters in Syntagma Square showing the EU stars arranged in the shape of a swastika below the words ‘Nazi-Nazi Merkel-Sarkozy’.

In Chile protestors have taken issue with the education system, most of which is private. The London riots began as a protest about the shooting dead of Mark Duggan in dubious circumstances, but quickly descended into opportunistic looting. Most recently Russian protestors have demanded the annulment of the recent election results amid allegations of widespread fraud.

The only protests which can claim to have global coherence are those of the Occupy movement. Apparently some people don’t like capitalism and want to replace it with a system they believe to be fairer – I think we’ve been here before.

The similarities which some journalists have drawn between these protests; the shared sense of disenchantment and the desire to create a new system, are not so much similarities as the very definition of a protest. The observation that most of the protestors are young and educated is hardly surprising – the vast majority of protest movements are student led.

Yet I have no doubt that this myth will be a persistent one, because the journalists who repeat it want so desperately for it to be true. The euphoria surrounding the Arab Spring was so intoxicating, the sense of occasion so palpable, and the cause so just, that the temptation to align with it was irresistible.

Historians will run with this myth for some years, so I’m writing this article for the revisionists. When enough time has passed that a more cold and considered approach can be taken to the many protests which occurred this year, I hope this article can shed some light on the perspective of contemporaries during the myth’s inception and before its triumph. For the benefit of historians I will write in the past tense: the protests were disparate, the circumstances were unrelated, and the glory of the Arab Spring was not shared.