You are at:Home»Fashion and Style»Lisbeth Salander is a dexterous enigma; a new generation pop-culture heroine
Social share:

Her black biker boots are held together with duct tape. Pale with dark razored hair, her head is down and she doesn’t say much but smokes intensely. Lisbeth Salander: style icon. She wouldn’t be happy about that one. 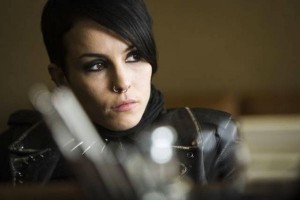 As the turbulent, anti-social, computer-hacking protagonist of Stieg Larsson’s The Girl with the Dragon Tattoo, trendsetting is not on her agenda. In fact, Lisbeth is more of an anti-icon in a world that was cooing over Kate Middleton two minutes ago.

“Her whole thing is that she never wants to draw attention to herself,” says actress Rooney Mara, who plays Lisbeth in the new film adaptation. “She dresses the way she does because society has constantly, throughout her entire life, told her that she’s worthless.”

Style icons used to be made of shiny things, like Audrey Hepburn and Marilyn Monroe. They represented an elegant glamour that was fantasy, yet accessible to women. Through Rooney Mara, Lisbeth Salander is beautiful and delicate too, but is also volatile and ruthless. She inspires fear; variety at last.

Hollywood has summoned Lisbeth as its unlikely it-girl. Collaborating with the blockbuster, released December 26, H&M has created a Salander inspired capsule collection brought to life by the film’s costume designer Trish Summerville.

Featuring shredded T-shirts, cropped moto-jackets and dark denims, the line is a cleaned up version of Lisbeth’s androgynous, utilitarian styling in the film. “We all wish we had a little piece of Salander, whether it’s her ferociousness, her drive or moral code,” says Summerville.

But the collection has come under the fire of blogger Natalie Karneef who wrote an open letter to H&M accusing the retail giant of ‘glamorising rape’. “Lisbeth (who suffered sexual abuse) has been through hell, and her clothing is her armour.” Karneef writes: “That’s her choice, and it’s an understandable choice. But you glamorise it, putting a glossy, trendy finish on the face of sexual violence and the rage and fear it leaves behind.”

H&M defended the collection’s brash style, saying that it is inspired by ‘a strong woman who stands up for her ideal.’ Lisbeth, although vulnerable and childlike at times, is complex and evolved beyond any Hollywood archetype. She outplays her male counterparts and shows a calculated strength of character, defying any notions of a soppy love-struck dame.

Hepburn’s Holly Golightly was a vacuous society girl, Lisbeth Salander is a dexterous enigma; a new generation pop-culture heroine. 90’s grunge, man-hating, cyber-chic, anti-fashion is in, not that Lisbeth would care.

Social share:
Previous ArticleAre our politicians afraid of what an atheist might do if in power?
Next Article Is it possible that a radio DJ has become more effective as an ‘official opposition’ than some of our MLAs?