You are at:Home»News & Current Affairs»Opinion»Letter from Vancouver: Irish artist Paddy McCann is the toast of Vancouver
Social share: 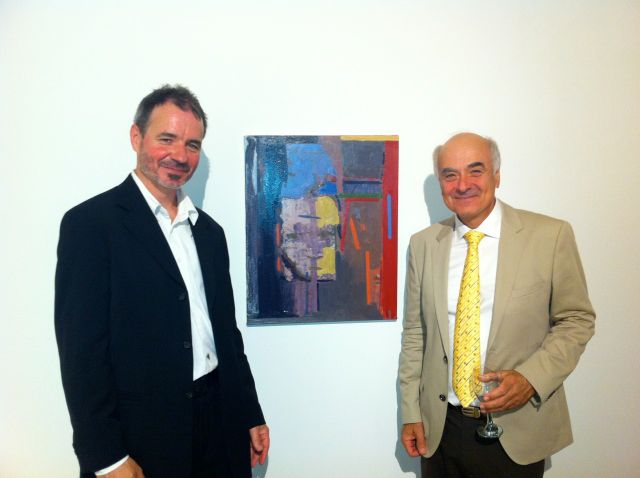 Our recent September show at the Petley Jones art gallery in Vancouver was a spectacular affair. “ Vertical Bridge” by Irish artist Paddy McCann (pictured above left with myself) drew a crowd in excess of 150 people to the opening reception. The audience was treated to an introduction by the Irish Ambassador to Canada, Ray Bassett followed by an emotional and educational address by the artist himself.

Many of those attending the show had not lost their Irish accents but quite a few local Canadian art collectors put in an appearance and also purchased examples.  A one – man show by an Irish artist in Vancouver is a rare occurrence. In fact the last one was in the mid 1950’s and was held at the Equinox gallery on Granville street , just 100 yards from the Petley Jones gallery.

The artist was William Scott and  he went on to become one of the most important European painters of the late 20th century. Unfortunately he only managed to sell three paintings. Paddy McCann did somewhat better. Of the 24 paintings  exhibited, 18 were sold on the first night.

McCann’s early works were heavily influenced by his experiences living through the tumultuous political and social unrest of Northern Ireland. In the “Vertical Bridge” show there seemed to be a personal reconciliation of past events through time and peace with a resultant insightful analysis of the human condition. The paintings possess great sensitivity to colour and texture, hovering delicately between abstraction and figurative representation.

These are difficult times for contemporary Irish artists facing the storm of European economic tribulations. Tradionally most art is parochial – the buyers tend to purchase locally and not much art crosses international boundaries. By good fortune and lots of natural resources, Canada has managed to maintain a steady keel in the current economic climate. Coincidentally it would appear that the Canadian art collector is now prepared to look beyond the borders for good art at reasonable prices.

The success of Paddy McCann in Vancouver could be a beacon of light for others to follow.

Social share:
Previous ArticleThe Eamonn Mallie Daily
Next Article Was Seamus Heaney making a statement in donating his manuscripts to the National Library of Ireland?

Michael was born in Belfast and graduated in medicine from Queen's University in 1974. He worked in the Royal Victoria Hospital Belfast between 1971 - 1974 and gained membership into the Royal College of Physicians Edinburgh in 1974. That same year Dr Goldberger and his wife emigrated to Vancouver, Canada - where he has worked in a family practice ever since. Michael served on the Editorial Board British Columbia Medical Journal from 1985 - 2002 and was certified in The Acupuncture Foundation of Canada in 1996. He was a Staff Physician and member of The Board of Directors of the Institute for the Study and Treatment of Pain, Vancouver 1996 - 2000. Dr Goldberger has been happily married to Joanne, also a Belfast native, for 30 years. His hobbies include collecting Irish and Canadian art, tennis, golf and gardening.