You are at:Home»News & Current Affairs»Opinion»Letter from Calgary (In the Shadow of the Rockies) – by Colum Quinn
Social share: 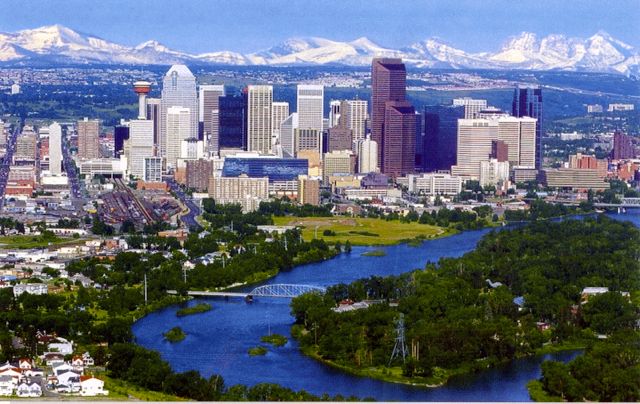 Calgary – the heart of the new West is how the city brands itself. This is a city of 1 million on the eastern foothills of the famous Rocky Mountains – one hour east of the renowned ski resorts of Canmore and Banff where the 1988 Winter Olympics were held – remember Eddie the Eagle and the Jamaican Bobsled team – these were the games that made them famous.

It feels like a bigger city – the downtown core is a high density collection of some of the tallest skyscrapers in Western Canada and home to many of the big oil companies like Suncor and EnCana – who are in the process of completing the newest and biggest scraper in the city – the domineering Bow building which houses 1.7 million sq ft of office space. They haven’t even moved in yet and word is its already too small for them. Thats a sign of a company going places. The oil and gas industries are the major employers here as the have their headquarters for their operations up in Northern Alberta in the oil sands of Fort McMurray.

Calgary is a city used to boom and bust which happens in line with the price of a barrel of oil. It boomed in the seventies and crashed in the eighties. This is evidenced by its growth – as recently as the early sixties its population was only about 250,000 people and it definitely retains the air of a town thats made it recently big. Today Calgary, along with our Western neighbours of Edmonton, Regina and Saskatoon are the four most economically vibrant cities in Canada. Alongside the oil industry is the Agricultural industry which is huge in our province of Alberta. The flat prairie lands that surround the city grow Wheat, Oats, Canola (Oil Seed Rape), Mustard, Lentils and Peas from May to September annually. These super size ranches are home to the biggest agricultural machinery in the world. Case, John Deere and Claas vie with each other to bring out bigger combines, seeders, sprayers every year and their dealerships here sell equipment that can range up to and above ½ million dollars per item. A field here is measured as 160 acres so there are many farmers back home who would only own a fraction of a field over here.

With farms also come livestock and Calgary enjoys its reputation as Cowtown (the cities unofficial name) and the ranchers that live on the surrounding land revel in the annual Stampede which happens every July. This is a 10 day party encompassing two weekends when the city comes to a virtual standstill as the Worlds Greatest Rodeo comes to town. With a carnival atmosphere it draws crowds from all over the world and next year it will celebrate its 100th year.

It is sometimes described as the most American style city in Canada, the Texas of the north and having lived in both I don’t think thats an unfair comparison. Its big, its brash, its got the gleaming high rises, the oil barons and the highest percentage of millionaires in the country – all enough to warrant the comparisons

Its infrastructure is sprawling. Its not impeded by any physical boundaries so it can grow in all four directions. Therefore its well spaced out and doesn’t ever feel cramped. By and large its a very clean, safe and friendly place. Like everywhere there are pockets of need and social decay but there has been a great level of integration among the newcomers to the city with people from around the globe living next door to one another in all parts of the city.

As there are so many new Calgarians everyone tends to be a “blow in” – some just happen to be more recent than others, and as a result people tend to be welcoming and willing to strike up friendships in the most unusual of places. We’ve met new friends everywhere from standing in line at summer camp registration, facebook groups online and even while grabbing a milkshake in McDonalds. I have never arranged to meet up for coffee or been invited to a BBQ or someones house in such places in Ireland and yet in my first 6 months in Calgary this has become completely acceptable.

The way the city has been developed gives it quite a suburban feel. There are huge housing developments or communities as they call them here which all have very ample supplies of elementary, junior and high schools so kids never have far to travel. These communities are all well interspersed with parks, walkways, bike lanes, community centres and play areas. The streets are wide and the houses are big. Its a planners dream. The communities are served by nearby shopping centres with all the big box stores, chain restaurants and food superstores that you could want. It may be a bit bland and samey at times but then that is a complaint that can be levelled at many UK cities too – its just their layouts may lend more to a feeling of uniqueness. However, the vista of the Rocky Mountains snow covered peaks as you drive around the city’s perimeter never fail to remind you that this is a very special place in a very spectacular setting and really it is anything but bland and samey.

Social share:
Previous Article“A journalist? You want to be… a journalist?….well, good luck to you”
Next Article Listen here for Poots and Gildernew response to the Compton Health Review Report

Colum Quinn is a QUB Psychology and UoU Computing graduate who relocated to Calgary in 2011. Originally from South Armagh Colum has lived in Sweden, Australia and the USA. Married to Amanda with two young sons and currently operates an online business boopydoodle.ca and a Consultancy okComputer.ca He is on Twitter at @IrishinCalgary.