You are at:Home»News & Current Affairs»Opinion»Digging into Irish mythology with Paddy Brown – by Matthew Symington
Social share: 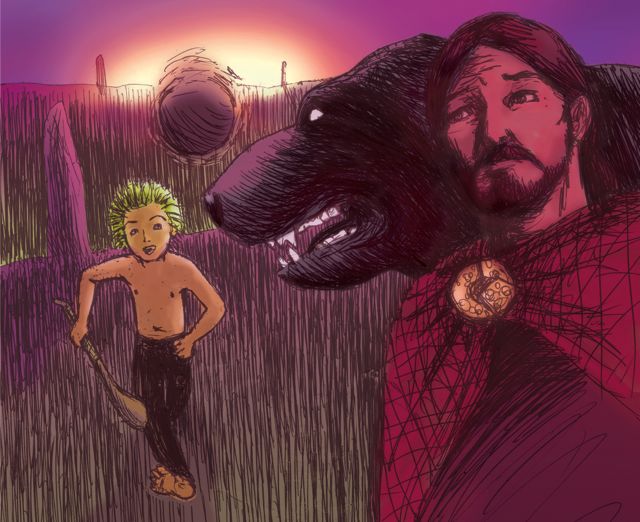 Blood, sex and betrayal. This isn’t an advert for a fifth series of The Tudors, but a description of the Ulster Cycle…

The English seem to have a talent for finding in their own history material for salacious and nail-biting dramas, communicated through a modern medium. Professional historians often baulk at these imperfect interpretations, but they shouldn’t underestimate the extent to which they galvanize interest in English history.

Here in Ireland some of our most dramatic historical episodes have never left the academic domain; TV and movie-makers prefer to tread the familiar ground of The Troubles. Yet our history is rich in powerful and scandalous tales, as Belfast-based comic artist Paddy Brown knows very well. Paddy is currently creating a series of webcomics based upon Irish mythology, and specifically the Ulster Cycle.

Paddy’s discovery of Irish mythology occurred almost by accident: “About fifteen years ago I wanted to do a comic based on King Arthur, and I was looking around a second hand book shop for research materials. I found a copy of Thomas Kinsella’s translation of the Táin Bó Cúailnge which I picked up for next to nothing. I read about half of it and thought, ‘I’m not doing King Arthur anymore.’

“Not only was it northern Irish, but the characters were so vivid and relatable, and the story was exciting but also funny at times. I just knew this was my material. There’s a sense of blood and effort to it.”

His first adaptation from the Ulster Cycle was the story of Ness, a princess of Ulster who forms a band of warriors to avenge the deaths of her foster-fathers. He is currently adapting The Cattle-Raid of Cooley, in which the young warrior Cú Chulainn defends Ulster from the armies of Connaught.

The stories, he says, are uniquely suited to comic art: “There isn’t a lot of introspection or internal monologue going on, there’s action and dialogue and the characters are talking us through everything that they do, and that translates very well… The fact that the stories aren’t that well known is a bonus.”

Perhaps the reason so few of us bother with Irish mythology is that before now it hasn’t been very accessible. The Ulster Cycle is scattered across numerous medieval texts with various translations. Paddy admits: “I’ve been faithful to the stories but not to the form of the stories, in fact I’ve had to do a fair amount of violence to them in order to make them work. The Táin Bó Cúailnge in particular is a very complex and messy story.”

As part of his mission to make the stories more accessible Paddy has used familiar Ulster-isms in the characters’ speech, words such as ‘wee’ and ‘like’ make an appearance. “It’s a way of making it immediate. One of the things I love about the material is that it’s not set in some misty fantasy land, it’s set in the real world and it feels as if it’s happening now. I wanted to achieve the same thing with the comic.”

Paddy’s efforts to bring a seemingly distant subject into modern relief go some way towards proving that in Ireland one of our richest resources is our history.